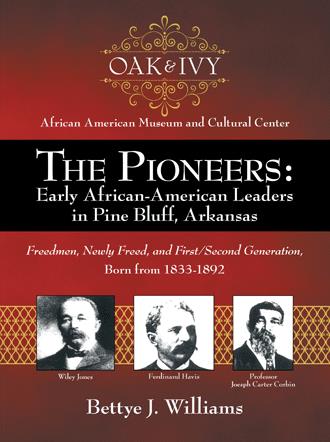 Pine Bluff owes much of its early progress to the resourcefulness of early African Americans who were talented, competitive, and Republicans. In spite of “separate and unequal” rulings, they became farmers, educators, politicians, and business persons. In a town where cotton was the major economy at the time, African Americans became craftsmen—creating frontier furniture, cast iron skillets, plows, and locks.

By the outbreak of the Civil War, Pine Bluff was prospering with wealth built on the crop of cotton cultivated on large plantations by enslaved African American laborers. By 1860, Pine Bluff had one of the largest slave populations in the state. Jefferson County was second in the state for cotton production. Union troops under Colonel Powell Clayton arrived in Pine Bluff on September 17, 1863, to protect the city from Confederates who were terrorizing the citizens. Confederate General J. S. Marmaduke tried to expel the United States Army in the Battle of Pine Bluff, October 25, 1863, but was repulsed by Union soldiers and former slaves.

Because of Union forces, Pine Bluff attracted many refugees and freedmen after the Emancipation Proclamation. After the Civil War, freed Africans worked with the American Missionary Society to start schools for Blacks. By September 1873, Professor Joseph Carter Corbin opened Branch Normal College of the Arkansas Industrial University. Founded as Arkansas’s first Black public college, today it is UAPB.

The close of the Civil War brought something new to journalism in the South. Newly freed Blacks established their own press. Black editors began publication during the Reconstruction era in an effort to achieve: (1) certain political ends; (2) promote harmony and good will between Whites and Blacks; (3) instruct and educate the race; and (4) defend the newly acquired rights of Black Americans. During Reconstruction, the Black press voiced support for the Republican Party and its program of racial equality. Black papers printed accounts of brutality and outrages on Blacks and defended the race’s newly acquired social and political rights against attacks by the Democratic press. Business communities promoted and supported events such as the Colored State Fair, an annual event in Pine Bluff that became a showcase for Black talent from around the state.

The 1880s was the fastest growing decade in the history of Pine Bluff. The city grew from having 3,200 residents to nearly 10,000 in the 1890 census. Business and community infrastructure increased as a result of the growth. Between 1880 and 1925, the victory of the Battle of Pine Bluff [1863] and numerous business, civic, and social interactions garnered Pine Bluff the designation, “The African American Paradise of the South.“

Records show that the car stables and barns of Wiley Jones were fine and suited to the service. The business was located on the periphery of his belt-line, at his beautiful park of fifty-five acres, south of the city, in which was a half-mile racing track, said to be second to none in the South. Adjoining the park was the octagon-shaped Colored People’s Fair Grounds. The structure included a large and well-constructed amphitheater, stock-stables, and stalls.

The history of Merrill School began in 1886, when the city purchased from Joseph Merrill for $4,000 the site between Pullen, Scull, Linden, and Mulberry Streets. On the block was his own property–a two-story frame dwelling which was converted into a five-room school building. This structure was to be used as the Black high school. The school was first called Greenwood School, but after the death of Joseph Merrill in 1890, as a tribute to his money, it was named Merrill School. Located at 1215 Pullen Street, the men selected as principals were well-qualified and the growth of the school reflected their strong leadership.

Missouri Street School is the only one of Pine Bluff’s larger schools of the 19th century that has disappeared completely. Many old timers are even uncertain about its original location. The school’s first structure—at 619 Missouri Street—was a four-room frame building erected in 1889. This building was replaced in 1901 by a brick structure. Having lived for many years not far from the site of the original school, Professor Marion R. Perry, Sr. [1855-1914] recalled that the school was housed temporarily in a building known as “Vining Hall” at 11th and State Street while the new school building was under construction.

Following Reconstruction [1866-1877], freedmen were able to become independent farmers through The Homestead Act which made it possible for a person to stake a claim to 160 acres at a federal land office and to acquire the land for a nominal filing fee after five years of residence. Most families divided the homestead into three plots—eighty acres for cultivation, forty for hay, and forty for pasture.

Migrating to Pine Bluff from settlements such as Bookman, Sheridan, Prattsville, and Malvern, African Americans from the preceding settlements inhabited homes on the West End of Pine Bluff. They arrived in the 1880s. Located west of Pine Bluff, the Bookman community is located along the old Princeton Pike Road, east of the junction of highways 35 and 190 in Darysaw Township. This community was originally populated by former slaves from South Carolina—Willingham, Haltiwanger, Tobias, Drayer, Burkett, Waddell, Ainsworth, Ruth, Counts, Dorn, Cannady, Mathious, Coogler, Stoudamire, Ghee, Litzsey, Ussery, Mays, Boyd, James, Bishop, and Cooper—and their descendants after the Civil War.

With the coming of the railroads in the 1870s and 1880s, Pine Bluff grew from 2,081 in 1870 to almost 10,000 residents in 1890. An agrarian boom developed. Planters could transport their cotton to markets in New Orleans and St. Louis. The Cotton Belt Railway played an important role in the growth of the city with the building of maintenance and car building facilities

The Pioneers: Early African-American Leaders in Pine Bluff, Arkansas, pays tribute to generations of African-American leaders who helped shape the town, Jefferson County, and the state in productive, dynamic ways.

Incorporated in 1839, a vast multitude of African-Americans from Mississippi, Alabama, Tennessee, South Carolina, and North Carolina arrived in the 1840s. While they are almost never talked about, their contributions are woven into the fabric of Pine Bluff’s history and present.

Despite “separate and unequal” rulings, they became farmers, educators, politicians, artists, journalists and more – and in this meticulously researched account, the author tells the stories of forty-five African-American achievers who deserve to be remembered.

Drawing on archival images, photos, interviews from former slaves interviewed by the Work Projects Administration during the 1930s, and accounts from descendants, the book highlights African-American achievers who survived and thrived during the most challenging of circumstances, including the Civil War, Reconstruction, and the Jim Crow South.

Discover the critical role that African-Americans played in Pine Bluff, Arkansas, as well as how they fit into the larger American narrative.

Bettye J. Williams taught literature, grammar, and rhetoric in the Department of English, Theatre & Mass Communications at the University of Arkansas at Pine Bluff before retiring after forty-three years to devote herself to the public, nonprofit sector. This is the first book published for the benefit of Oak and Ivy: African American Museum and Cultural Center. All proceeds from the sale of this book will benefit the museum. She lives in Pine Bluff, Arkansas.