The Power of the People

The Story of the U.S. Presidential Election of 2016 and How and Why It Made History 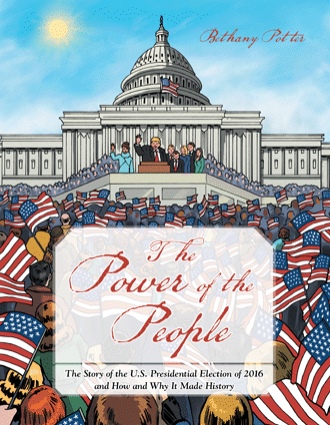 On June 16, 2015, a man named Donald J Trump rode down the escalator of Trump Tower, his flagship skyscraper in New York City, and announced, “Ladies and Gentlemen, I am officially running for President of the United States, and we are going to make our country great again!”

Hardly anyone took him seriously. Donald Trump was a famous businessman, not a politician. He had been the star of a reality TV show. He had never held public office. That didn’t sound like someone who could be President of the United States!

The presidential campaign began. Many people wanted to be President. Seventeen men and women threw their names in the pot as candidates for the Republican Party alone. They held debates. At the debates, Donald Trump said some outrageous things! Most politicians and news reporters laughed. They thought, maybe you can talk like that in the business world, but not in politics. If Donald Trump thinks anyone will vote for him, he’s crazy!

But across America, some people said to themselves, “Hmmm.”

Donald Trump began meeting with people all across America. He was a successful businessman, a multi-millionaire, so he flew in his own jet. But he didn’t go to the places jet-setters go. He went to places where families were struggling. Where factories had closed and hardworking people were barely getting by. Where crime and violence had made it unsafe for children to walk to school. Where terrorism was trying to take root.

They came because Donald Trump understood.

He understood that the politicians in Washington, D.C. kept saying that everything was fine, but it wasn’t. America, the land of the free, the home of the brave, the beacon of freedom for the entire world, was dying.

On June 16, 2015, a man named Donald Trump announced, "Ladies and Gentlemen, I am officially running for President of the United States, and we are going to make our country great again!" Since Trump was a businessman who never held public office, hardly anyone took him seriously. After all, what does a reality TV star know about running a country?

The presidential campaign began, as did the debates. Trump said some outrageous things! Most politicians and news reporters laughed because no other candidate talked like him. The media believed he was just a big joke, but across America, people started listening. People started to believe, especially as he visited struggling families and factories about to close.

Bethany Potter has lived and worked overseas. She’s seen governments that are good and governments that are bad, but they all have one thing in common: Their people want to be free! Bethany lives in the United States with her two amazing children and their various pets.