Secret of a T-Rex 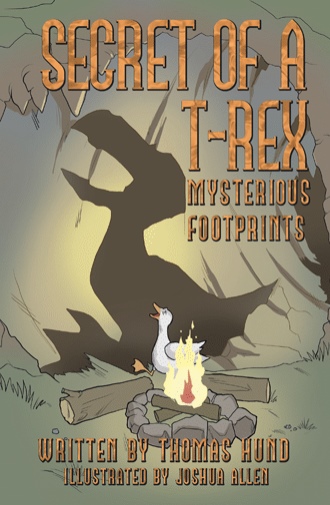 The mountain began to shake. A bad-tempered earthquake rumbled like thunder. Boulders raced down the mountain. A landslide sent several forest animals on a frenzied search for cover. Then just like that—it became quiet.

In an open area surrounded by trees, Tobias Toad was the first forest creature to bravely venture out from hiding. He slowly hopped about inspecting his cluttered habitat. Boulders were everywhere. Strangely sitting in the middle of the area was a small, egg-shaped object.

“Actually, it’s similar in size to an ostrich egg,” quacked Darcy as she and the other forest animals appeared. Then she tapped the object with her beak and said, “Smooth, well-shaped, and good coloring, but it’s clearly not a real egg. It’s too hard.”

“I’m sure it’s just a tiny rock that came from the mountain,” said Myrna Muskrat. “That landslide made a real rocky mess everywhere you look.”

Levi Lynx warily approached the object. He pawed, sniffed, and licked it. “I agree; it’s not an egg,” he said with a light growl. “But it’s not a rock either.”

Willis Weasel had a stick in his mouth. He lightly struck the object. “Weirdest thing I’ve ever seen,” he said. He laughed after dropping the stick. “Maybe it’s something magical … something eerily mysterious.”

“Nonsense!” bellowed Bertha Bear as she lumbered up to the object. With her huge paw, she carefully rolled the object over to examine it. “There’s nothing magical about it. But perhaps it was made by a human,” she said.

“If that’s so, then maybe it will explode,” cautioned Scully Squirrel. “Humans are good at making tricky, dangerous gadgets that harm animals.”

“And I say again that it’s just an egg-shaped rock that nature has made,” said Myrna.

“I’m sure we’ll all have a good laugh later,” said Bertha. “But for now, we need to treat this thingamajig cautiously.”

The seven animals agreed, using their own particular voices. They understood each other extraordinarily well, while to a human, their articulations were heard as growls, squeaks, snarls, croaks, or quacks.

After the animals had spent a few minutes cautiously studying the object, the sky darkened. Lightning and loud claps of thunder overwhelmed the forest. Rain pelted the animals as they ran for cover.

“Now do you believe me?” shouted Willis. “Something magical is happening! First there was an earthquake, then a landslide, and now a storm! What’s next?”

A dangerous lightning bolt was next. It struck the object, causing a loud explosion. All the animals had to cover their eyes. Smoke and dust filled the air. When the air cleared, the object had a colorful, pulsating glow to it: purple and blue, green and yellow, and all different shades of red.

As the animals began to shelter themselves from the impending danger, the colorful presentation diminished. The peculiar object calmed down and surprisingly, looked like an egg.

Bertha cautiously inched toward it and sniffed it, saying, “It’s warm—very warm. And it—it actually must be a real egg. It has to be.”

“I’ll be the judge of that,” quacked Darcy. “After all, I’m an egg layer, and I’ll know if it’s real.” She cautiously studied it and then lightly tapped it with her beak. “Well, I’ll be a genuine feather duster. It is a real egg!”

“Oh, that’s creepy!” said the muskrat. “Totally bizarre. How can that be?”

“Perhaps Willis is right,” considered Levi. “Nature is filled with magical power. Lightning is so awesome that when it strikes, it can do anything it wants.”

“If the egg is real, what does it mean?” wondered Bertha.

“But what kind of hatchling?” wondered Scully.

Levi studied the egg and then sniffed deeply. “Who cares what it is?” he lightly growled. “Why wait for it to hatch? It most certainly has the scent of a lunchtime delicacy.”

“That’s enough, Levi!” warned the bear. “You might want to get that hungry look off your drooling face.”

Myrna squeaked, “Don’t you want to know what it is, Levi? Aren’t you a little curious?”

“Not really,” snarled the lynx as he slinked away from the egg. “It seems a waste not to have a little snack.”

“Well, if we want it to hatch, we need to create a nest and keep it warm,” instructed the duck.

The animals (except the pouting lynx) found grass, leaves, and twigs and then fashioned a soft, sturdy nest. Bertha carefully placed the egg on top of the creation, and then Darcy became the surrogate mother by sitting on it.

The story begins as an earthquake shakes a mountain, sending tons of rocks and boulders downward into a tranquil forest. From the rubble, a fossilized dinosaur egg appears, sparking interest among seven, unalike forest creatures. Lightning strikes the object and it magically becomes real. Soon a Tyrannosaurus rex hatches, and the lives of those forest inhabitants would forever be changed.

It’s been documented that wild animals often protect and parent an abandoned baby animal, even if the baby is strangely unlike them. That’s what happens when Toby T-rex meets his new, loving family. These extraordinary creatures help Toby learn the ways of the forest, even though an ever-present human threat hampers their incredible secret. And adding a bit of intrigue to the story, there’s another T-rex on the scene. Friend or foe?

Always alert for danger, always on the move, this family of friends is unaware that their destiny has an astonishing twist.

Thomas Hund is a retired middle school teacher and coach who lives in the northwest suburbs of Chicago. He has written several children’s stories and often spends time reading them to elementary school children. Learn more at thomashundbooks.com.