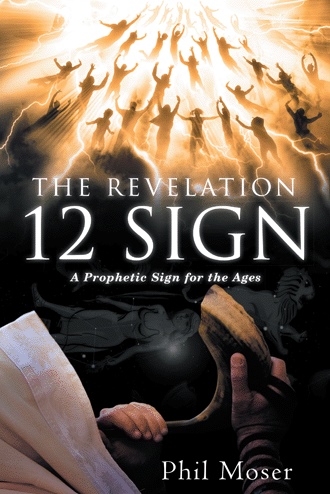 A major sign in the heavens will occur in September 2017 during the two-day feast of trumpets called Yom Teruah, which is also known as the hidden day.
God will reveal in the near future a major sign in the heavens for all to see, which depicts our redemption, and it is called the Revelation 12 sign.
Bible prophecy is going to be fulfilled right before our eyes in September 2017. That is when the passage of scripture found in Revelation 12:1 will be fulfilled: “And there appeared a great wonder in heaven; a woman clothed with the sun, and the moon under her feet, and upon her head a crown of twelve stars.”
The purpose of this book is to explain the prophetic meaning of this amazing sign of the ages and thereby bring glory to God’s holy name. You will discover in this book that God’s plan of redemption includes something you may have never heard of or understood before. Scriptural evidence will be presented that will prove that there have been two virgin brides, both visited by the Holy Spirit. This has resulted in two immaculate conceptions. There will soon be a second prophetic birth, which, like the first, will be announced by a sign in the heavens. The first sign in the heavens, which God gave for the prophetic birth of Jesus, was the Bethlehem Star. The sign in the heavens for the second prophetic birth, that being the church, will be the Revelation 12 sign. The latter sign will be manifested through the constellation Virgo, the virgin as alluded to in the Revelation 12:1. This event will be followed by a catching away of the church unto the throne of God, which is spoken about in Revelation 12:5: “her child was caught up unto God, and to his throne”. After this event, Messiah and his church become one flesh. The celebration of great joy (Teruah joy), which follows this union, is called the marriage supper of the lamb. The case will be made using a strong scriptural foundation that the basis of the interpretation is true.
See how the parable of the fig tree as given by Jesus, ties in beautifully with the Revelation 12 sign. This book will open the readers eyes so that they may understand the meaning of the Revelation 12 sign and thus be prepared for what is about to happen.

The book of Revelation contains great and important prophecies about the end of times—and significantly, about our redemption. But what should we be watching for? What are the signs of the fulfillment of these end-time prophecies, and what scriptural evidence is there to support what we may see?

The Revelation 12 Sign explains how a major sign in the heavens will occur in September 2017 during the two-day feast of trumpets called Yom Teruah, which is also known as the hidden day. God will reveal this sign in the heavens for all to see, and it is foretold in Revelation 12:1—“And there appeared a great wonder in heaven; a woman clothed with the sun, and the moon under her feet, and upon her head a crown of twelve stars.” This marks the prophetic birth of the corporate body of Christ known as the Church, and with this birth will follow the prophetic marriage of Christ and the church—the Messiah and his church will become one flesh.

As the days of Revelation draw closer and prophecy is both revealed and fulfilled, it is more important than ever for believers to understand the meaning of the characters, events, and symbols in Revelation as well as the appointed time known as Yom Teruah. The Revelation 12 Sign will elucidate powerful evidence supporting both the interpretation of this sign as well as how God desires his saints to be aware of what is to come.

Phil Moser is a retired petroleum geologist currently involved in the prison ministry in Edmond, Oklahoma. As a longtime student of Bible prophecy for over twenty years, he has been most influenced by prophecy teachers such as Perry Stone, Chuck Missler, David Reagan, Grant Jeffrey, Adrian Rogers, Hal Lindsey, Jack Van Impe, and Mark Hitchcock. Philip and his supportive wife, Roxie, were high school sweethearts, and today they have three grown children, three beautiful grandchildren, and three golden retrievers.