In a Buffalo Robe 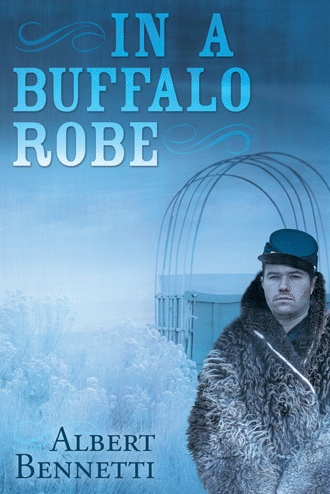 Several hours had passed, as I sat waiting for the intensity and rhythm of the din about me to vary, indicating the presence of a visitor. While contemplating settling for anything capable of providing a meal or two for Pa and me, my attention was caught by activity at the face of some long reeds to the right of my musket barrel. A spider had spun an intricate web between the reeds, and a small white moth had found himself caught up in its adhesive latticework. It was frantically fluttering its one free wing. My instinct was to brake open the web with my musket barrel, setting free the desperate creature. But, remembering that I was to be a non-intrusive visitor to this area’s environ, I decided not to intervene on the normal course of this natural encounter. Quickly, a thin, somewhat long-legged, spider moved halfway out from its position of hiding, paused, and apparently waited for the fluttering to repeat. Then, he again ran forward till his head pressed against the body of the moth, which fluttered only once more. <p>

Upon hearing a loud cracking sound in the woods to my immediate front, the sense of remorse I had been experiencing by not going to the aid of the forlorn creature was overpowered by excitement. A series of lesser cracks of twigs in the underbrush followed, indicating the rapid approach of a large animal. The brush waved momentarily, then, flattened fully, revealing a huge, fully racked, venison buck. My musket was up at the ready when he appeared. I set my bead directly between his muscular shoulders, but before I could get off a steady barreled round, the buck lunged forward as his left leg collapsed beneath him, and his body dropped to the side, following his head in a downward plunge.<p>

The disappearance of the buck from my sight was immediately replaced by another one, to his rear. This one, however, had shoulder length hair, wore a loincloth, and carried a shiny bladed dagger in his right hand. My mind flashed back to the Indian at the stage that had cut off my necklace. As I tried to determine if they were one and the same, I heard my musket fire. It wasn’t till after I’d seen the bullet splatter against his chest, with the slap of heavy impact, that I realized I had fired it. Jumping up from my kneeling position, I rushed toward the brave. He had stopped sharply, dropped to his knees, then fell face first into the brush. Blind to the huge deer right in front of me, I tripped over his legs with both of my feet, and was sent sprawling, face down on the ground, immediately in front of the brave. The hope that he was, somehow, not seriously hurt by my shot, was shattered by the sight of a pool of blood filling the gaping hole between his shoulder blades, where the musket ball had exited. <p>

My fright climaxed at the realization that no blood was surging from the wound. Hunting experience had taught me that, if its heart was still pumping, blood would surge from any deep wound received by an animal. I was sure the Indian brave was dead. I had killed him! What would the consequences be? Should I take the brave back to Pa, or to town, or just leave him here? Perhaps, I should go far from this area and hunt as if nothing had happened. He might have friends showing up at any minute. Since he was not carrying a bow, he had apparently run the deer down. His friends would be tracking him quickly on horseback to help with the carcass. If they found me with him they would surely kill me. I had to get away from him. That was for sure. What of the deer? I could load him on Jingles, but I would have to halve the carcass, in the least, to be able to lift it. This was out of the question. I determined that I had to leave immediately.

Contemplating the multitude of facets that are required to sustain a flourishing of mankind on earth, the author contends that Divine Providence should be accepted as an undeniable reality. Such being the case, it follows that the Hand Of The Creator would be essential in directing events that would consequentially become influential within that flourishing. This novel depicts the development of characters and events, and the manner in which their significance may have culminated at the Battle of Glorieta Pass in New Mexico. It describes how their presence could have directed the unfolding of this highly significant and influential Civil War battle. <p>

Though molded into the context of a novel, historical reference is followed to a large degree in this novel, in order to present the reader with the experience of this incomparable faction of American history. The Western Expansion encompassed the Mormon migration, the buffalo migration, The Pony Express, Wells Fargo, the Telegraph, The Butterfield Stage Line, the railroad, the Indian campaign, the slavery question, and the Civil War. The reader can reflect on the experiences of a youth engulfed in this environment as the youth encounters and contemplates the wild western territories. <p>

Olof Swenson believes that at sixteen years of age, a man should be making his own way in life. Unfortunately, his father has been dictating his and his brother’s paths ever since he decided to unsuccessfully follow the wealth of California gold prospectors. Now it is the Rocky Mountain gold rush and Olof does not want to abandon the two men he loves most. Seemingly with no other choice, he leaves everything behind once again and embarks on yet another gold adventure with his family without any idea of what lies ahead.

As they journey across a dangerous wilderness inhabited by Native Americans and other pioneers, Olof becomes embroiled in a series of internal struggles as he fights to survive the hardships of the trip, attempts to decide what to do about the potential wife patiently waiting for him back home, and fends off attacks from Native American warriors. But when an unfortunate mishap suddenly draws him into the Civil War, Olof’s determination and lifelong convictions are challenged like never before as the battle of Glorieta Pass begins.

In a Buffalo Robe shares the gripping tale of a young man’s experiences as a journey for gold with his family unwittingly leads him straight into a historical Civil War battle.

Albert Bennetti spent his early years recklessly gadding about the streets of a large Jersey city where he gathered experiences that inspire his writing today. He is a Vietnam veteran who has battled a series of challenges that include cancer and heart disease. Albert currently resides in Robbinsville, New Jersey. In a Buffalo Robe is his first book.