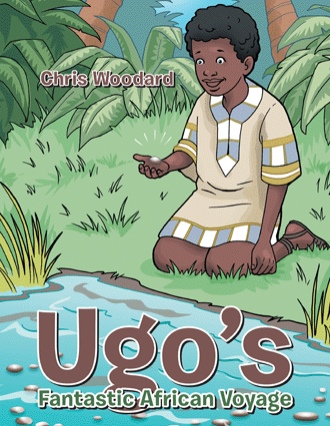 Once they were at the market, Ugo decided to wait outside on the crowded sidewalk in front of the store. As he sat on the bench he once again began to think about all the mean things he'd been called by his classmates. He felt so all alone, he didn't one friend in the whole world. No one seemed to understand what he was going through. If only one person in this whole wide world, could understand just how he felt, maybe he wouldn’t feel so bad, he thought. Then from out of nowhere there came a voice, a very different sounding voice. “Hello there.”, it said. There sitting next to Ugo on the old wooden bench was a little boy. “Where did you come from? “Ugo asked surprised. The little boy turned and pointed towards a small store next to the supermarket. Ugo was amazed! He’d been to that supermarket a million times, and he'd never noticed the store before! Above the door of the store there was a large sign that read 'AFRICAN MAGIC’”. My father owns the place.”, he then said. The boy spoke very strangely, Ugo had never heard anyone speak that way before, he also couldn’t help but notice the boy's clothes, he’d never seen such clothes before. The boy wore a long white shirt that reached his knees and it was trimmed in gold, he wore baggy white pants and on his feet, he wore sandals.

Ugo doesn’t think of himself as that different. He’s just like a bunch of other kids at school—except for his name. “Ugo” is a Nigerian name, and due to its uniqueness, he is bullied and made to feel isolated and alone. No one seems to understand what he’s going through. One day at the market, he sits and just wishes someone would understand and make him feel better. Then, out of nowhere, he hears a voice. The unfamiliar boy on the bench looks and speaks like no one Ugo has ever met, but he says his father owns a store called African Magic. Strangely, the boy gives Ugo a little pebble, and that pebble takes Ugo on a wild journey all the way to Africa. There he gets the chance to learn about his heritage and his name. Ugo’s Fantastic African Voyage is one boy’s journey of self-discovery as he uncovers his ability to overcome the pain of bullying while learning about the majestic land of Africa. Truth is, everyone can be bullied: children, adolescents, and even adults. Anyone can feel like an outcast. Yet the important thing to remember is that it’s our unique qualities that make us special. All we need is the courage to accept ourselves and others, differences and all.

Chris Woodard has always been passionate about writing. Like many others, he experienced bullying at a young age. He hopes to teach kids about inner strength and show them they’re not alone. Although he grew up in a small town, he now lives in Atlanta, Georgia, where he runs a successful business.