The Beginning of the Rynn-Human Alliance

by Henry A. Burns 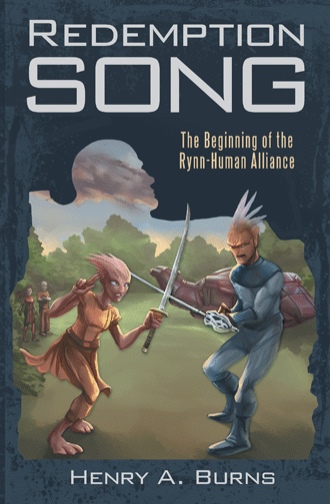 Small Flower woke in darkness, surrounded by unfamiliar odors. She flailed around, trying to free herself from the heavy bonds holding her down, until she realized there were no bonds and she was wrapped in a blanket.

After a minute or two her racing heart slowed down and she was able to get a better look around. It was still dark but light was seeping in through what, despite its shape, could only be a window. It gave enough light that her eyes were able to discern some features.

The room was roughly rectangular instead of the more familiar circular, as was the lone window. What she assumed was a door was also rectangular instead of arch shaped. “If that’s a door.” She whispered nervously. “Then these creatures must be giants.” As if the thought acted as a summons she heard a loud rapping on the door. Then the door opened. Small Snow Flower screamed in terror as a monstrous apparition filled the entranceway.

Small Snow Flower flung herself off the pallet and scrambled as far from the creature as possible. She searched desperately for escape but there was no way out. Small Snow Flower cowered in a corner with her vestigial claws extended to their fullest and her crest was raised to its’ highest extent. Her brave display marred by the fact that her eyes were tightly shut as she waited for the end.

She heard an oddly gentle grunting and hooting and then silence. It was another minute before Small Snow Flower opened her eyes. The entranceway was again blocked and the room was dark. “I still live.” She thought in relief. Not that she thought she was safe. For all she knew the creature had been fooled by her bluff and was waiting for her to fall asleep.

“But you were asleep.” She reminded herself. “It could have killed you then.” She slowly lowered her arms and retracted her claws. Her eyes had adapted more to the gloom of her surroundings and she began to take in more details. Wherever she was it was bare save for a large box-like construction against one flat wall and the soft pallet she had been lying on.

Small Snow Flower slowly stood and walked over to the pallet, one eye kept darting toward the blocked exit. She considered putting on her ship boots but instead padded over to the exit and pressed her ear against the flat barrier. She could hear the creature as it moved around. “What do I do?” She asked herself. “Spirits weep for me.” She chirped as visions of being eaten alive invaded her overactive imagination.

It wasn’t an unreasonable fear. The Rynn has encountered three technologically advanced life forms in their 200 years of exploration and two of the three considered Rynn to be nothing more than food. The Rynn weren’t sure about the third, as they had become more cautious about contacting other species after their earlier experiences.

Small Snow Flower huddled in the corner of the strange box-like room. “I won’t cry, I won’t.” She told herself even as tears ran down her cheeks. “Stop it.” She commanded herself. “You may no longer have your ship but you are still Bright Sunlight’s daughter.”

She raised her head and looked at the panel covering the exit. “Spirits protect me, but if I am going to die then I want to die on my feet.” She stood and walked over to the exit. The panel was made of some brownish substance that Small Sun Flower suspected was vegetable in nature. She noticed a round knob and tried to turn it. At first it didn’t budge but then she tried turning it in a different direction and the knob turned smoothly. She pulled on the panel and it opened.

Small Snow Flower peeked out into a brightly lit room. She blinked several times as her eyes adjusted before taking a tentative step out. At first she didn’t see the creature but the musky scent from earlier became more pronounced.

She swallowed as she realized the creature was perched on a wide fabric covered structure no more than a dozen strides away. She straightened. “If you’re going to kill me, do it now and get it over with.” She chirped in false bravado.

The creature tilted its massive head in response but did nothing else. To Small Snow Flower the lack of activity was almost painful. “Well?” She chirped angrily as the silence stretched out.

The creature’s mouth turned up at the corners and then it hooted. The sound reminded Small Snow Flower somehow of laughter. The creature nodded and then it stood.

A child of wealth and privilege, Small Snow Flower is a member of a highly intelligent spacefaring species called the Rynn. Although she is young and untested, she is given a trading ship to command by her father. But just months into her first voyage there is a mutiny, and Small Snow Flower finds herself marooned on a primitive planet, believing she will die alone.

Jeremy Blunt is a bitter old man. For fifty years, he’s mourned the death of his wife, cutting himself off from the world and living alone in a forest cabin, believing he will die alone.

But fate has other plans. It brings together these two lonely people in spite of their differences—age, experience, and species. Slowly but surely, the alien girl and the elderly human man find ways to work together. They must find the strength to change their destinies and those of their respective home worlds. This is the beginning of the Rynn-Human alliance.

In a story of fate, second chances, and redemption, an unlikely partnership forms between a young alien and an old human widower that will change the future of both their races.

Henry A. Burns was born in Brooklyn, New York, and spent his formative years in Long Island. He’s mostly gotten over it. He has worked as a musician, competitive ballroom dancer, banker, and a software quality assurance engineer. He has written a number of books and was at one time a popular fanfiction writer, but this is his first published novel. He currently lives with his wife in San Francisco, California.