Agents in My Brain

How I Continue to Survive Type-One Manic Depression 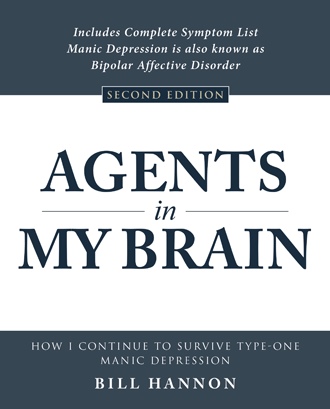 A small cocker spaniel started following me. At first I thought nothing of it, but then I thought it was sent to trail me by the KGB. It probably had a microscopic radio transmitting device on its collar. So, in keeping with the delusion that everyone on campus was supposed to switch dorm rooms to confuse the KGB, and in keeping with the delusion that the dog was trailing my scent for the KGB, I did what people do in the movies when bloodhounds are chasing them. I crossed water. It washes off the scent. The dogs lose your trail. That way the KGB wouldn’t be able to capture me. I took off my jacket, shirt, shoes, and socks, and swam across a pond on campus that had a dormitory on the other side. I stopped in the middle to pour mud on my head. I thought to myself, this is a crazy way to make a living. I wondered if being a CIA agent was enough to impress Melanie Carson, a woman I had a huge crush on in high school.

I kept thinking about the song that has the line, “Save my life I’m going down for the last time.” I pretended to have trouble swimming as I thought of those lyrics. I had no trouble swimming, but it was cold. It was April 12, in Tacoma, Washington. It was about 6:00 a.m. when I got out of the pond, ran into the dorm, and into the men’s showers. I took a hot shower to warm up. So far, nobody had seen me. After about ten minutes in the shower, I got out. I walked down the hall and saw someone’s name written on his door. It was “Brewster.” “Ster” was a syllable that reminded me of a nickname I used to have. The door was unlocked, so I walked in. There was nobody there. I used a towel to dry off, and I changed into some dry underwear that I found in a drawer. It fit. Then I put on some pants and a shirt, and they fit. I thought I had arrived at my new address, the one I was supposed to go to in order to confuse the KGB. I read the class schedule of the room’s occupant, and then I started reading his letters from home. I figured I would have to take on his identity. I was getting comfortable and even turned on a radio. Soon the real occupant of the room came back. (He had been watching the space shuttle launch down the hall.) He asked, “What are you doing in my room?”

“We’re all supposed to switch rooms. Go over to Jewish House and they will tell you about this.”

“Go over to the Jewish House and they’ll explain this to you.”

I said, “Well, then call the police.” I thought the police would side with me.

He called campus security who then called the police.

They got Dr. Holley on the walkie-talkie phone link, and I heard him say, “Yeah, he’s a psycho.”

Agents in My Brain gives vivid descriptions of the grandiose delusions and paranoid delusions that type-one manic depressives get. It also shows that when you get the right medication and some talk therapy, you can recover.

Bill Hannon has led support groups for the Depression & Bipolar Support Alliance since 1987. He is a guest lecturer in college psychology classes. Bill now lives in St. Paul, Minnesota.

“Bipolar disorders directly affect over 2.5% of the US population, and indirectly affect many more friends and family members. Bill Hannon has written a moving and gritty first-hand account of Bipolar I disorder. He describes its effects, how treatment works, and insights into why treatment sometimes doesn’t work. He explores in great detail his experiences with delusional thinking as part of a years-long story of recovery and perseverance. Recommended to those patients, family and friends looking to understand themselves and others with affective disorders. This book is also prescribed for professionals seeking to better appreciate what their patients experience outside (or inside) the office walls.”
—Warren Pendergast M.D. Medical Director Emeritus. NC Physicians Health Program

“Agents in My Brain offers an extremely interesting and painful glimpse into the mind of an individual suffering from manic depressive illness…As a professor of psychology who teaches a course on the psychobiology of mental disorders, I am always on the lookout for books that provide first-hand accounts of mental dysfunction. This one fills a void in my reading list.”
—Lawrence Wichlinski Ph.D. Professor of Psychology, Carleton College

“In Agents in My Brain, Bill tells the story of his struggle to find the right combination of medical professionals, medications, and support systems to understand and to manage his bipolar behavior. The journey was difficult, confusing, and often overwhelming. Yet Bill survived AND thrived! An inspirational story, Agents in My Brain is a testament to the ‘spirit to overcome’ within each of us. I thank Bill for having the courage to share his life experiences with those of us who continue to ‘search for the total cure.’ (Bill’s regular closing comment in our bi-monthly support groups).”
—Cindy. Co-facilitator with Bill Hannon, for the “Depression & Bipolar Support Alliance” support group

Bill Hannon has suffered from manic dpression since 1976. He has led support groups for the Depression and Bipolar Support Alliance since 1987 and has been a guest speaker at college psychology classes since 1991. Hannon currently lives in St. Paul, Minnesota.