by Marcee Corn & Cover design or artwork by James Mackenzie 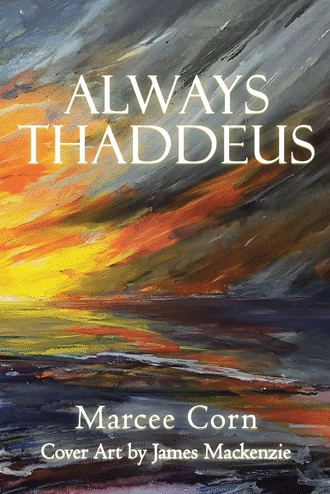 Beth Morgan sits alone on the porch of the funeral home. She slowly rocks herself back and forth and back again, searching for comfort.

The sound of the old rocking chair does not provide it. Her husband attempts to bring it, though he is not able. And the hordes of people around her, are just that…a horde.

Alone in her misery, Beth sits and rocks herself back and forth and back again.

Questions whirl around in her head as if in a cesspool of hopelessness.

They say on the day that Thad died, he went to heaven.

They say it was a peaceful death.

They say he was in no pain.

How do they know?

They say I could hold my boy just one more time, before he goes to heaven.

I held him for a long time.

They took him away… away from my arms.

Away from me, his mother.

They say I will heal in time.

They say that I can have more children after his death.

They say all these things and more to me.

But I stop listening.

I am tired of listening to what they say.

I am tired of them.

They are noise. Like cymbals crashing, they distract me from my search for comfort, and more importantly, peace.

Beth searches the scrapbook of her mind for every image of Thad she can hold on to, begging for peace. She becomes fully aware that she will no longer be able to hold her son. No longer will she hear his sweet voice. And no longer will he need her. She won’t be able to push him on a swing or play ball with him or watch him grow up. He will be out of reach and that is not acceptable to her or her sanity.

Like a drowning victim at sea, Beth is desperate. Floundering in deep waves of sadness, she attempts to reach out for a lifesaver. But where is it? She retreats further into her mind to fervently dig into the abyss for something she can hold on to. She leaves reason behind, and crawls into a cave of denial and into the depths of her soul. There her thoughts become her only comfort, and the voice in her mind, her only friend. The preserver of her sanity must reside in a new reality.

On the day of Thaddeus’ death, Beth allows the calming voice to take over. The secret voice that whispers its message to her over and over as it penetrates her being, becoming the motivation that she needs to survive.

Two days later, Beth greets the mourners on the steps of the large Methodist Church begrudgingly wearing the appropriate black hat and somber dress. Contrary to her attire, she also wears a simple smile on her face and slight glint in her eyes. The hordes can’t know it, her husband doesn’t know it, but hope has found her. Though there is a tombstone with her son’s name on it, Beth believes with all her heart that Thaddeus is still alive. All she must do now… is find him.

Setting out on her mission she travels to a neighboring town; Beth has some important business to tend to.

She enters the shop with a mission and a certainty. She quietly lays back in the reclining chair to let the professional do his job. The dark haired beauty closes her eyes and dreams of Thaddeus.

She wakes to an unfamiliar voice in her ear saying, “I am finished.”

Opening her eyes she feels pain. But this pain is not the sorrowful one found in her broken heart, it is a good pain. It has purpose.

Looking to her left arm, the blood is puddled up between and around the words etched there. These are words that she would live by. These are the words from her mind that had quietly taken up residency in her heart. And now too, were in permanent black ink on her forearm.

Beth’s broken heart skips a beat as she mouths the words there, Always Thaddeus. For the first time in several days, she smiles. Pulling her sleeve down she sets off on her search. This mission will consume Beth for the rest of her life.

Hope is a cornerstone of human existence. Hope may even define what it means to be human. It is such a visceral emotion that it can be even more enduring than love. For when love fails, the hope for love can endure.

Three individuals, eagerly pursuing their own version of hope, arrive on the idyllic island of Owl’s Nest. Believing they will find hope through the others, they soon learn that they must find it alone.

Sitting alone on the funeral parlor’s porch, Beth Morgan slowly rocks herself back and forth and back again. Alone in her misery she sits and rocks while frantically searching her mind for hope. Though there is a tombstone with her son’s name on it, she believes that Thaddeus is still alive. All she must do is find him.

A stiff sea breeze coming off the water caresses Sandy Smithson’s face and pulls at her hair. She is invigorated by the smell of sea salt and fish as they compete for her senses. Suddenly feeling hopeful, she wonders if Owl’s Nest is where she will find love again.

Running from his past, Andrew Morgan searches for sanctuary from the scars of life. He finds it on Owl’s Nest. But waiting in the shadows and hidden in plain sight…evil lurks. It moves through the streets, into the cottages, and onto the unruly shores of this peaceful island bringing devastation and destruction. Owl’s Nest, Maine, the respite from his past, turns on Andrew in a moment, leaving him exposed.

Marcee Corn, a teacher and storyteller by profession, lives in the mountains of North Carolina in a log cabin with her husband and dogs. When not writing, she spends her time pursuing her love of antiques as one of the proprietors of The Twisted Twig Antiques & Accents, an eclectic shop in Banner Elk. Corn is co-author of the memoir of her mother’s journey through Alzheimer’s disease, Unclaimed Baggage, published by Archway Publishing.