A Young Airman’s Tour at Clark Air Base

by Bill Bowers & With Sandee Hart 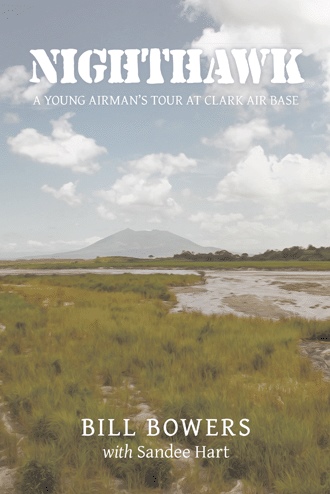 Generally, the “once upon a time” scenarios are reserved for a little girl’s fairy tale.

Those beloved fantasies that end with two people living happily ever after; but little boys have the “once upon a time” stories too! Our tales involve epic battles fueled by the primal instinct to survive and show the world we are men. Sadly, most of the tales end up doing nothing more than proving the adage, “boys will be boys.” Mine were no different, except for the alcohol consumed as the story unfolded.

Once upon a time on a tropical island far away from home, I found myself walking down Fields Avenue with fellow Airman Bob Kirkman. The year was 1985, we were young, we were wild and we had time to kill. We were also a couple of smart-aleck kids constantly coming up with exciting and innovative ideas to turn a normal night into a night to remember. For us, that meant we were about to do something monumentally stupid.

We took a right onto A. Santos Street and shared some inappropriate banter about Super Head, Smut Hut, and Mega Head. Those bars needed no explanation as to what happened behind closed doors. The GIs stumbling through the door were too drunk to remember where they were. However, their mouths spilled epic tales of their latest conquest.

Bob and I walked to the corner where A. Santos met Real Street and headed into one of my favorite hangouts- El Toro. El Toro was larger than most of the hole-in-the-wall bars I frequented and always provided a triple score- loud music, beautiful girls, and cheap beer. From the outside, it looked like the kind of place where old men congregated to blow off steam and young men went to exercise their inner demons while showing off their male pride. The curb appeal offered the perfect combination of dark and inviting. I liked El Toro because it was a no judgment, no frills hang-out secluded enough to raise an eyebrow and open enough to call you in.

When you stepped through the doors, El Toro wasn’t your Dad’s watering hole packed with snarling, destitute, lifelong drunks. There were no toothless men sitting in corners crying in their beers; nor were there men passing away the hours reminiscing and arguing about sport’s teams. El Toro was the crown jewel of paradise, at least for that night. The place was filled with a wild and wobbly array of shit-faced GIs. The bright lights surrounding the stage on the left and the dance floor in front of it always made my eyes squint. Rickety old tables surrounded by wooden chairs outlined the dance floor and bordered the stage. Just past the stage were steps leading to a balcony lined with a counter and bar stools that gave customers a unique view of the dancers below. It wasn’t the kind of place you would take the girl next door out for a date, but it was the kind of place you took a bunch of your buddies to relax and have some harmless fun.

Despite the rusty nails holding rotten wood planks to a beam above our heads, Kirkman and I found two vacant spots on the balcony. Oddly, and not at all in our character, we were minding our own business with San Miguels in hand and shooting the shit a while Led Zeppelin, Van Halen and Night Ranger blasted through the speakers. Our eyes locked in on the stage below captivated by the swirling movements of the dancers. They were very beautiful, but sometimes, when looking down from above, it looked like a swell of silky black waves hopelessly crashing the shore.

I needed a fresh beer and noticed three young marines had taken up residence on the stools to our left. The guy closest to my left seemed relatively sober when he began a conversation with us.

He said in a spirited tone, “The girls in Angeles are a lot friendlier than the ones in Olongapo. The girls in Olongapo were cold, money hungry bitches, who could not be trusted. The girls here seem to want to find steady boyfriends and get married.”

I wondered how many beers this guy had already had and if he was a fan of fairytales or cheesy romance novels? Kirkman and I laughed, then Kirkman said, “Yeah, they want to get to the big BX in the states.”

“Sister Christian” began roaring from the speakers when one of our new friends, or who we thought might become a friend, rambled about marines being tougher than airmen. All I could think was great, this little shit wants to a pick a fight. Once again, Kirkman and I cracked up. Then, we found out the little shit’s nickname was Smurf. No, not the little blue gnome sporting the white liberty cap; but for a marine or any servicemen for that matter, our Smurf was short. He stood out like a half-naked forest gnome at about 5’6 in a branch of the military usually associated with towering strength.

Our slightly stocky little gnome, wearing a white t-shirt from one of the bars called The Brass Knob, hailed from Dubuque, Iowa and had been in the PI for about a year. Like Bob and I, Smurf’s first assignment was the PI; us to Clark, him to Subic Bay. After a year, he realized that Angeles offered a more relaxed and inviting atmosphere for young men looking for a good time.

During his senior year in high school, author Bill Bowers needed to make some tough decisions about his life path. At seventeen, he made a commitment to join the Air Force. On October 5, 1984, he began his military career.

In Nighthawk A Young Airman’s Tour at Clark Air Base, he recounts his coming of age in the 1980s while stationed at Clark Air Base in the Philippines. Through a series of vignettes centered on the antics and comedic misadventures of a young airman’s first tour of duty, this memoir offers a mirror of who we are as individuals. It shares real-life stories that explore the ups and downs of service in the military, the culture and economy of the Philippines, and the actions of a bunch of kids tossed onto an island paradise.

Nighthawk A Young Airman’s Tour at Clark Air Base focuses on a self-proclaimed screw-up with a moral compass that often causes conflict. It tells how an eighteen-year-old kid fresh out of high school became a man.

Bill Bowers is an American Air Force veteran of Operation Desert Shield/Storm and co-founder of the 3rd SPG Veterans Foundation. When he is not writing, he can be found on the baseball field or spending time with his children and grandchildren.