The Life and Times of John J. Montgomery 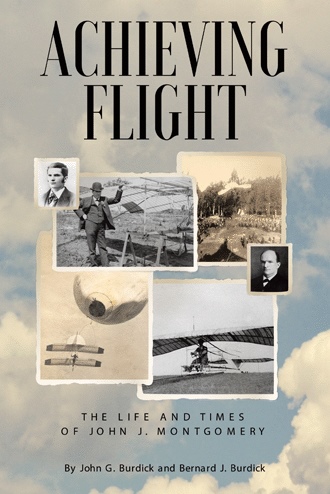 John J. Montgomery (1858–1911) was the first in the US to fly in his own machines, beginning in 1883. He was the first to discover how to exploit the airflow about a cambered wing to achieve flight from seminal research he conducted from 1885 to 1892. From 1892 to 1904, he constructed small models for testing and then full-size, tandem-wing craft able to carry a pilot. He was the first to train pilots to fly during this period. His 1905 Santa Clara glider made the first public flights from over 3,000 feet, dropped from a hot-air balloon with the pilot flying in circles, figure eights, up and down, even performing a side roll, and ending with the pilot landing safely on his feet, “like stepping off a porch.” No other aeroplane at the time was capable of this. He was awarded US Patent No. 831,173 on September 18, 1906, for “Aeroplane” (applied for in April 1905). In 1911, with backing from investors, he designed and built a completely new monoplane aeroplane in preparation to adding a motor, but died in a freak accident during testing.

What distinguishes this book is the critical analyses we provide of Montgomery's prescient understanding of aeronautics relative to other practitioners and researchers prior to, during, and after his time. We not only cover his significant accomplishments in having his pilots fly successfully in high air but also evaluate in detail the scientific correctness of his ideas, which were decades ahead of the times.  Our technical analyses have convinced us that there is much more to discover about Montgomery and his ideas and we hope our book will inspire others to reevaluate his importance to aeronautical history.

Achieving Flight, by John G. Burdick and Bernard J. Burdick, provides an historic and scientific assessment of the role of John J. Montgomery (1858-1911), one of California’s own, in the early years of flight in America. It tells the story of Montgomery, an eminent scientist whose achievements in aeronautics and electricity have largely been forgotten. This biography narrates how, during his days as a student at St. Ignatius College, he was fortunate to be instructed by some of the most renowned Jesuit scientists ousted from Europe, earning a master’s of science degree in 1880. The Burdicks also provide a critical analysis of Montgomery’s prescient understanding of aeronautics relative to other practitioners and researchers prior to, during, and after his time.

Noting Montgomery’s importance in aeronautical history, Achieving Flight reviews his significant accomplishments in having his pilots fly successfully in high air (up to 4,000 feet, being lofted there by a hot-air balloon), but also evaluates the scientific correctness of his ideas, which were decades ahead of the times.

John G. Burdick earned a bachelor’s degree in political science from Santa Clara University. He’s a retired US Army counterintelligence officer who served in Vietnam and a high school teacher at Watsonville, California. He lives in Pacific Grove, California.

Visit them online at