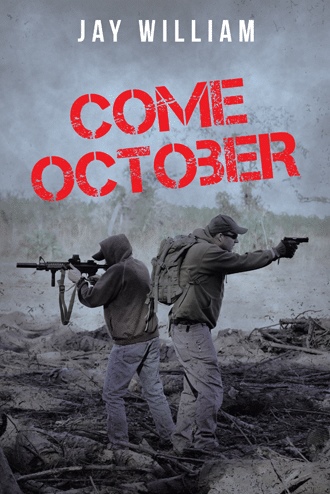 Charlie is growing up. I don’t know how much longer I can keep that kid from the wolves. I’m packing for the day, under the forest canopy. I can hear the stream bubbling, and I know Charlie is checking the traps and bush hooks we set last evening. I’m hoping to score a deer today. We could use the meat, and I like the hides for packs and pouches. The settlers love them and they trade well.

I think about what’s left of our country, and it makes me sad.

Granddad could tell you where he was when the Japanese bombed Pearl Harbor. Dad remembered where he was the day Kennedy was shot. I know where I was when the twin towers fell. I was in the maternity ward in an Augusta hospital, colicky, and running a fever according to Mom. If you asked me where I was when the invasion happened, I’d tell you right quick that I was standing at a lookout on the Appalachian Trail with my Dad. We saw the flashes, and looked south toward Atlanta in time to see the mushroom clouds and some kind of moisture ring being blown out in the sky like an angel’s halo.

Later I’ll tell you about the few years I spent in Africa, but for now I have to get moving. Charlie will stay busy with the traps til noon, and by then I hope to have a good sized deer in the bag.

There’s a trail about an eighth of a mile from our campsite, running north, leading higher into the mountains. If you take it south, you’ll reach a settler’s compound where it’s easy to trade and buy. I don’t take Charlie there. Too much risk, and I don’t really like having to kill folks if I can avoid it. The last three rounds I fired in anger were over Charlie, and I’ve regretted it ever since. I should have left the kid at the campsite and gone shopping alone, but Charlie just had to see how cotton candy was made.

I started out with my pack and rifle. The pack weighs about fifteen pounds, and it holds just enough to get me through a night if I get caught out alone. The rifle is a semi-automatic, with some kind of fancy, dancing pony logo on the side. I’m down to fifty-two rounds of ammunition, so I have to make them count. From what they tell me, along with what I’ve seen in the settlements, ammunition isn’t going to get any easier to come by any time soon.

The trail is well worn, beaten down like a herd of cattle came through. My boots are almost at the end of their life, and the other pair will probably only last through the coming winter. If the settlements weren’t supplied with necessities, I wouldn’t even have socks and t-shirts. I’ve stolen more clothing than anything else from the soldiers, and given the chance, I’ll do it again. Maybe it’s time to start stealing more than coats and pants and boots. Maybe it’s time to find a settlement and put down some roots.

Maybe I should concentrate on my surroundings, before a random patrol gets me pinned down like a hen when a fox makes it inside a chicken coop.

I push north for about an hour, and make my way up into a draw where I’ve seen deer sign, fresh over the past weeks. I settle in on my haunches and wait. The sun is up good, and I start to sweat. I think it’s May. Fifteen years ago, the Department of Natural Resources would have had my hide for hunting out of season, but they don’t exist anymore. I suspect most of the game wardens are out there doing the same thing I’m doing now.

It takes about an hour, but my patience pays off. A doe wanders up the draw toward me, and I drop her with one shot through the neck. I’ve gotten pretty good with this rifle. It doesn’t have one of those fancy scopes on it, even though I’ve used a few I stole from soldiers. The iron sights work just fine for me, and as long as I don’t use the gun for a battering ram, I figure they’ll stay in adjustment forever.

The doe cleans out in about thirty minutes, adding in the time it took me to set up the field-expedient gimbal I like to use. I put her cuts into the cape, and smile knowing that Charlie and I will eat well for the next few days. The kid has become a whiz at catching fish, to which I’m no stranger, but we’ve eaten fish for two weeks straight while I nursed what I thought was a broken ankle. I take it easy moving down the draw and make it back to the trail. It’ll take me longer to get back to camp with the extra weight, but I need the walk to strengthen my ankle.

Something told me to wait another day to hunt. I should have listened to that little voice.

In the second decade of the millennium, facing severe drought and the threat of starvation, China and North Korea created the Combined Nations and invaded and took over the United States. Now it is an occupied country, and the remaining population never knows which country’s soldiers they’ll encounter next. Seventeen years after the invasion, the drought comes to an end.

Jake Talbot has seen the worst of war and all that follows. He guides Charlie, a child he’s raised for eight years while avoiding the OcForces and living outside the cities and settlements. In the wilderness, Jake encounters Lucas Chan, a Chinese sergeant who has lost more than his share of men to rebel encounters. An unlikely alliance forms, and the pair soon learn just how far the OcForces will go to fulfill their exit strategy. Come October, the OcForces must be gone. What will their exit cost, and are they willing to pay the price?

In this novel, set in an occupied America, an American man and a sergeant from the occupying military join forces in an attempt to resist tyranny.

Jay William is a Georgia native who injects more than twenty years of military and law enforcement experience to stories set in the South. He currently works for the Department of Homeland Security and lives with his wife and sons along the coast of Georgia.