A Tale of Compassion and Coexistence 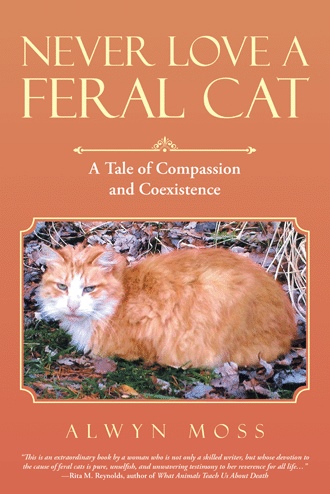 Simply being labeled feral can define a cat’s destiny. Assumptions can lead to suffering, for animals and the humans that care about them. As humans we tend to believe in generalizations. Use a word and it summons an image and a reaction that can preclude any alternative of looking more deeply at that individual reality. Say “snake” and almost everyone shudders. Say “feral” and a look of disgust and aversion can be expected—a response to an image of a dirty, vicious, unattractive creature hiding in bushes, waiting to do harm of some kind. For others, the word feral brings a response of confusion. What is a feral? And that is a question that should be asked. Because there are almost as many different kinds of feral cats as there are different kinds of people. Animals vary greatly in their personalities, their behavior and their potential for change, and many of these traits derive from early kittenhood experiences. Since we seldom know their histories, a feral or homeless cat is an unknown.

Sitting in my big wicker chair near the sliding glass door, I see three of the ferals on the porch, in separate baskets in the winter sunlight. They seem so obviously grateful for the warmth. The one I call Fluffy suddenly sits upright and begins to scratch his thick, furry, white-and-orange hindquarters vigorously, his head tilted to one side, eyes closed. The intensity of his concentration contrasts the other two cats, who are asleep in total indifference to all that is going on. Oh how these oblivious beasts inform us of our relative insignificance—other than to serve them, of course. As if they don’t know that I am here.

After struggling for half an hour to settle into my routine time of meditation, I contemplate the cats and the garden just beyond. I feel a deep sense of peace and enjoy my rightful place in the universe and in the larger scope of life simply through my attempts at relationship with these semi-wild animals in a natural setting. There is something that feels much more in sync with nature for humans who meet cats in the natural surroundings where they are at home, which also helps us grow in our connection to that place as well. Perhaps this is why I cannot help but love ferals, despite their habits and ways that come into conflict with aspects of who I am and what I also love.

I am aware of the ways I manage to split my consciousness in loving the ferals. I am not delighted with the destruction of the lovely wicker chair that they have claimed as theirs, nor with the endless deposits of cat hair on the cloths and old cashmere sweaters I provide for them every winter. Oh well. Acceptance and surrender are among my ongoing goals. Now, thanks to my devotion to these felines I inherited when I moved here, I receive some sense of allowing this destiny to be a major part of my life. It makes me feel good and needed to help them know an existence that is bearable, even pleasant in many ways. At least for some of them, it is preferable to the lives of indoor cats who are frustrated by their limitations.

It would be an illusion, however, to believe that all ferals enjoy their freedom, and certainly not during the hardest of southwest Virginia’s winters. Grumpy is a case in point here. I took him to be a “real feral” in that he was untouchable, dirty, unkempt, and aloof, and his age and background were unknown. Only as the years went on did I learn he had in fact been somebody’s pet, and his owner’s unexpected death relocated him to the unfamiliar grounds of the retirement settlement—a move for which he was completely unprepared. He adapted as best he could over time. And despite, or perhaps because of, his pathetic mournful mien and needs, he attracted attention and food and care at times from those humans drawn to help such creatures. In his later years it was also evident he was more sensitive than the other cats with whom he tried to get along, and physically weaker in some ways. Winters, except for the mildest ones, were hellish for him and he struggled to survive them. His fur was thin and soft, and he shivered visibly when the temperatures dipped into the low thirties and below. He had a chronic congestion in his lungs and eyes. So it was no wonder that having grown old—how old there was no way to know—he was uncomfortable outside, huddling through the nights with two of the far-furrier orange-and-white cats if he was lucky, or crying to come inside someone’s home, usually mine.

It is also an illusion to believe that feral caretakers always enjoy the tasks involved in the difficult, ongoing work. Still for me, and I feel quite sure for others on this path, it is the way the cats help each other that can make the difference in their survival and in our desire to endure. Watching them groom each other, allow each of the group to get to the food dish without fighting, form a small mountain of fur on cold nights, and even, I believe, mourn their losses when one of them dies, has added to my admiration of their communal habits. These ways are something they learn out of necessity, I imagine. As the poet Walt Whitman said so famously, “They do not sweat and whine about their condition.” These cats exemplify adaptation to circumstance and acceptance of difficult conditions. They need so little—a hole in the wall, some dried leaves or an old box with newspaper for warmth, whatever food is given to them—for which I believe they exhibit a form of gratitude.

In this time of technological complexity, real connections seem more difficult but more important than ever. In this memoir, author Alwyn Moss describes the unexpected relationships of her and her neighbors in a rural retirement settlement with a colony of feral cats. With the aid of committed volunteers and animal professionals, the residents’ vision of harmonious coexistence becomes an amazing reality.

The fear of wildness, so common in humans, is one of many obstacles the residents have to confront. Day by day, Moss and her friends come to know the cats as bright individuals and to accept them as worthy creatures who deserve to be cared for. Timid at first, the ferals slowly grow tamer as barriers of mutual mistrust are bridged and the shadow of mass euthanasia—the fate of so many feral animals in shelters—fades.

So why should we care about creatures we don’t own or control? What’s in it for us? The human-animal relationship beyond pet ownership has much to offer. As the dark image of ferality is replaced with experience and understanding, these “cat ladies” learn courage and independence and come to experience more aliveness and joy. Read how Fluffy, Grumpy, Pet Pet, and others enrich Moss’s life and the lives of her dear friends.

Alwyn Moss’s early fiction and nonfiction appeared in Harper’s, Dance, Seventeen, and Mademoiselle. Her first book, Shaping a New World: A Biography of Margaret Mead, led to her deeper interest in animal and planetary issues. Her other works include Remembering Their Names: A Collection of Poems and To Love the Earth: A New Way of Being Human.