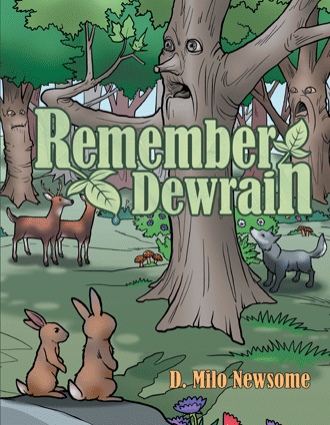 Meanwhile, deep within the heart of the forest, a tree name Higittybottom, was having a very unusual problem. One of the younger leaves that she hosted, named Amis, was asking the strangest questions.  “Why do I have to be a leaf when I would rather be the twig that’s holding me?”

Higittybottom asked him, “What’s wrong with being who you are Amis? Collecting the sun rays to turn into energy is very important work.

Amis responded, “Well, I think this twig’s job is more important, and that’s what I want to be, -more important!”

Higittybottom was shocked at this behavior.  She had never heard this kind of talk before.  “Amis, you have to stop this, right now!” Higittybottom pleaded.

Without any warning, Amis decided right then, he was going to be that twig, and started working his way back in. All the other leaves watched in horror. Higittybottom was in horrible pain, and terrified, as Amis began taking over the twig! For the very first time evil had entered the land.

Higittybottom cried out to her husband, “Conifer come quickly!”  When Conifer, as well as others heard Higittybottom’s cries, they immediately began making their way to her. As soon as Conifer reached his wife, he saw an expression on her face that he had never seen before, fear! He had no idea that the strange, odd feeling gripping the land, was coming from her.

“What’s wrong Higitty,” Conifer asked, as the others gathered around. “It’s Amis,” she said, “You have to stop him!” When Conifer looked closer, he was stunned to see Amis taking over the twig that once held him high. He was twisting and turning, forcing his way into the twig. Conifer tried everything to stop Amis, but it was useless. He had overtaken the twig.

Everyone was in shock that witnessed what just took place. What would make him do such a horrible thing? News of this event spread rapidly throughout the land, as Conifer and Higittybottom sent word to the Counselors for help. But Amis was just getting started. He was stronger, and already battling his way into the branch, shouting, “This is more important than that useless twig!” With every move, Amis made Higittybottom cry out in pain from this unnatural act. Amis was robbing from Higittybottom, as well as his brothers and sisters, the sugar nutrition needed to stay healthy.

Conifer tried to comfort his wife as he and others stood by, helplessly pleading with  Amis.

Four days had passed when word finally reached the Counsel, and they called for an immediate meeting. Hours later, it was finally determined that the odd feeling that was gripping the land, was coming from this source. Right away, the Counsel sent Rou to escort the Ancient One, a Mighty Redwood, to Higittybottom. He would know what to do.

Rou flew as fast as he could, while Judicious and two of the Wisdom Teachers began making their way to the heart of the forest, were Higittybottom lived. Another four days had passed, and by this time, Amis had become so strong that he had begun taking over all the branches, and the trunk, and was ready to rid himself of Higittybottom and become the important one!

Higittybottom was exhausted, and in a lot of pain, as she pleaded for help. Conifer, who stayed by Higittybottom’s side, tried to comfort and embrace her, but this time Amis pushed him away! “Don’t touch me,” Amis yelled! For the first time, Conifer realized that he may never see his wife again. He cried out, “Amis, please stop this madness!”

Everyone looked away from the evil form that emerged, still attached to the side of Higittybottom, making sounds no one had ever heard before. Amis had become so huge and distorted, no longer resembling a leaf, he was unrecognizable. Oozing from everywhere, Amis snarled and growled at the Ancient One who stood before him fearlessly, as Conifer rushed to his wife’s side.

The Ancient One asked, “Amis, do you have any idea what you have done here?  You have brought things into this world that has never existed! You’ve broken every Law of the land! For the very first time, peace has been disrupted. Now we have to decide what is to become of you.”  Amis was still snarling and growling, while trying to reinter Higittybottom, with no success.

The Ancient One asked Rou to keep his eyes on Amis, while he met with Judicious and the Wisdom Teachers to decide what was to become of Amis. Hours later, the Counsel returned, and the Ancient One made his way to Higittybottom with the verdict and spoke, “Amis this is a very sad day for the world. You have been found guilty of unspeakable behavior.”   Amis, looking hideous, continued oozing, snarling, and growling as his verdict was being handed down. The Ancient One continued, “We have determined that you can never be trusted with living in tranquility with the rest of the world. For this reason, you will be separated from your host, dry up, and be no more.”

Amis shouted, “Who do you think you are?

Sometimes you might not like where and what you are. You may even consider to do something about it. Happily, these changes won’t hurt others. But in other cases, many people and things could be affected, and not in a good way.

In his book, Remember Dewrain, author D. Milo Newsome introduces you to a leaf named Amiss. He lives in the heart of a forest and is unsatisfied with himself. Everyone around Amiss tries to convince him of how important he is, but he is so jealous, thinking others are more important. Amiss decides he no longer wants to be a leaf and starts taking over his host, Higittybottom!

Nothing like this has ever happened in this peaceful land. But Amiss is just getting started. He brings something new into this land: evil. Remember Dewrain shows how working together, and love, can stop evil from spreading throughout the land.

Milo Newsome struggled with reading, writing, and spelling until high school. When he read The Secret Garden as an adult, it sparked a hunger for reading for the first time. He, his wife, Bobbery, daughter, Keyana, and their cats live in Upper Marlboro, Maryland. A portion of the royalties from Remember Dewrain will be donated to The Dyslexia Foundation, a nonprofit that helps identify and assist children with dyslexia.