Letters and Postcards from C&B 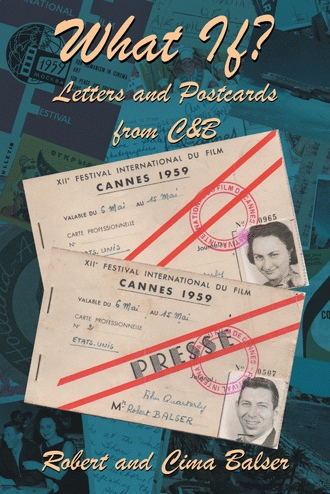 Once on the left bank, the taxi let us out in front of “un petit hotel.” Those old friends who toured Europe a couple of years ago, in Paris with almost no money left, found what turned out to be a “Hotel de Passe” where the ladies of the night could rent a room for an hour, more or less. Our friends said the owner was kind enough to let them spend the night, for $1.50 including breakfast. What better way to start our Paris budget! I had sent a letter to the owner, Mme Sordet, asking for a room the night we arrived, hoping she wouldn’t find the economic loss too great renting at the entire night rate instead of the hourly rate.

So we were prepared for something less than luxurious. However, when the door opened and we were greeted by a wild apparition carrying a telephone and wearing a pink plastic hat with a giant tube attaching it and her to something in the other room, while a wolf-dog barked and salivated at her feet (luckily he was hung up in all the cords and couldn’t get to us), we were somewhat startled.

Back to the fractured French again. Yes, she was the owner - please forgive her - her hair in the dryer and all -(oh, was that what it was?). No, she didn’t have a double room for us, but she could get one next door, although it wasn’t quite ready yet. Eventually we climbed five flights of stairs (no elevator), which were barely covered by what once, some eons ago, might have passed for a maroon “runner”, and struggled into a tiny room with just the inventory contained in my vocabulary list: a bed (masc. sing.) a chair; a table; a washbasin; something that looked like a bedpan mounted on a stand, and at last I understood the noun (another masc. singular) Armoire a place. I was told this was the French answer to the closet problem. I suppose it is if you just have one shirt and one pair of shoes There was, to complete the furnishings, a 25 watt bulb glued somehow to the ceiling.

Still, when I opened the window, (French doors, what else?) and took a look at all those old roof-tops and orange chimney pots, shining in the moonlight, we were enchanted! Suddenly, everything was charming, lovely, beautiful, and were’t they right when they said that in Paris there is something “dans l'air”?!

All we needed to do was walk over to the Place de la Concorde and I was sure we’d find Gene Kelly and Leslie Caron dancing their hearts out. Thrilled beyond belief,

Bob, a professional animator from Hollywood, and his wife Cima, a would-be writer, decided to take a sabbatical to Europe in 1959.

With limited funds and a copy of Arthur Frommer’s Europe on $5 A Day, they hoped to stretch their adventure to six months. Forty years later, they were still on sabbatical.

In this memoir, they draw upon postcards and diary entries to share how they lived out their lives as expatriates in Europe during the second half of the twentieth century, living the dream of a free-spirited life that so many can only long for. Numerous pictures help illustrate the story.

They enjoy French onion soup at the Eiffel tower, experience the culture shock of using bidets in “water closets,” gorge on croissants, try getting used to two-hour lunches, and enjoy meeting fascinating and eccentric people along the way.

Take a step back in time with Bob and Cima as they do the unexpected, and dare to ask, What If?

Robert “Bob” Balser was an animator in Hollyood and Europe who worked in various capacities on many prize- winning commercials and documentaries. He and his wife, Cima, were founding members of the Benjamin Franklin Foundation and International School. He was a board member of the Animation Branch of the Academy of Arts and Sciences and a noted lecturer and consultant until his death in 2016.

Cima Balser graduated from UCLA and worked in the offices of Motor Trend magazine, as an executive secretary at National Dyeing and Finishing, and as a liaison with Herman Miller Furniture Company before she left on a sabbatical to Europe with her husband in 1959. She wrote film reviews, subtitles, translations, and lectures at the American Institute and the American Society of Barcelona while traveling and volunteered at the Benjamin Franklin School.