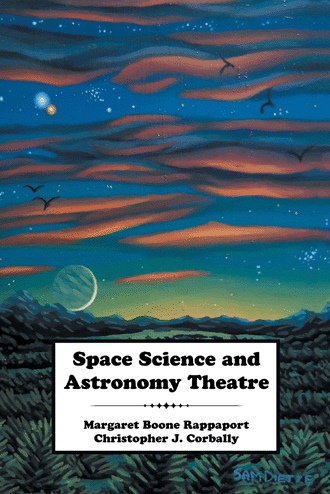 B. The Space Science and Astronomy Script:

The Fascination of Astronomy, the Utility of Drama, and the Interplay of Religion

A Matrix of Interdisciplinary Studies

This book lies within a matrix of many scientific disciplines. In our dozen Space Science and Astronomy Script packages, we trace processes and structures that begin with the Big Bang, then follow the emergence of molecular clouds, stars, and galaxies, and finally, we focus on human interaction in scripts from periods of time as long ago as 160,000 years, to a time as far in the future as A.D. 3054. In many ways, the pathos of human struggle remains the same, although the cultures vary widely from one epoch to another, from one script to another.

It is the thread of human sentience that interests us most, those special qualities that set our species apart and make it unique. Members of the genus, species, and subspecies [begin italics] Homo sapiens sapiens [end italics] are the only ones who presently exhibit a profound sense of self-awareness and an ability to solve problems through creative social action and symbolically transmitted patterns. In science, religion, and art, human beings find their highest expression, as well as a certain responsibility for the welfare of other species and the environment of the Earth. Human responsibilities are as great as human capacities.

After performing all of the five-minute scripts in this volume for a variety of audiences (high school students, college students, dinner guests, club members, and conference attendees), we have concluded that the scripts in this book have a curiously broad appeal. Each of the scripts takes drama, human social participation, and instruction in science and culture, and blends them into an effective mix that “works.” People laugh. People learn. People consider new ideas.

The reactions from audiences are initially curiosity and amusement, as when they first see the costumes for the A.D. 3054 supernova sighting (the authors show these and other costumes on the website, http://thehumansentienceproject.org). Then, they become interested in the topics in science and culture, and ask questions. Most individuals have not experienced dramatic productions in the venues where we have performed – in a school, at a planetarium, at an academic conference, at a club meeting for church members, in homes, and even in a public library. It is an unusual occurrence, and the near-uniqueness of the Space Science and Astronomy Script is part of the appeal of a Scripts Event.

Size of the Venue for a Scripts Event

Why a surprised and amused reaction occurs in response to a Scripts Event is worth exploring, but perhaps not too deeply. We believe that the scripts are effective because a dramatic performance is usually not so close, either in proximity or in the fact that onlookers can interact with the performers afterward, or they can take turns and become performers, themselves. Most people are familiar with dramatic productions that take place on a large stage, and the onlookers are far removed from the action. For a Scripts Event, a smaller location is preferable. We recommend that, where possible, the scripts retain a small-venue, intimate appeal, similar to a neighborhood theatre, a dinner theatre, or a theatre-in-the-round.

A second factor explaining the appeal of the scripts may be their informality. The authors have performed the scripts only by reading the scripts from a sheaf of pages, never by memorizing and speaking the lines. As scientists, both authors are, themselves, accustomed to formal presentations at academic meetings. In fact, it was their confrontation of the undesirability of a formal presentation that initially gave rise to the concept of the Space Science and Astronomy Script. The very first script was conceived as a novel way to get across ideas about the interrelation of astronomy, culture, and art, for adult colleagues at a conference on the “Inspiration of Astronomical Phenomena,” at the Hayden Planetarium in New York City. Over the next six months, other scripts were performed in private homes and at public gatherings to a variety of audiences. Section II.A describes the evaluation of three scripts presented to high school students, who, early in our planning, had become the focus of our educational project. We then provide the results of our evaluation of scripts in several different college classes in astronomy.

It is not necessary for a Scripts Event to be formal. In fact, a Scripts Event may benefit from informality, and so scripts are perfectly suited to a small classroom setting. For example, two students can first perform a set of roles, and then another two students can do the same. Indeed, the notion of switching the gender of the two characters in a script – one, a man, and the other, a woman – and allowing students to play counter-type (with appropriately re-named characters), is first suggested in the introduction to Script Package #9. However, this can be done with any of the scripts, or, two males can play the roles, or two females. Names of characters are easy to change.

If students want to present these scripts for a larger audience in, for example, a school assembly, they may want to memorize lines. If they decide to craft a three-act play using one of the scripts as the kernel of a longer narrative, with more characters, that approach will also work in a school auditorium, on a large stage. Indeed, it would be a valuable project in creative writing for some students to write a longer script, and for drama students to perform it. Students oriented to the sciences could lead the discussion of the science questions afterward, and a student who favors social studies could lead the discussion of the Lessons in History and Culture.

If you’re a teacher or parent struggling to get youngsters or young adults interested in space science and astronomy—or an inquisitive student—then you’ll love this fun-filled book of theatrical scenes.

In addition to astronomers and astronauts, the scenes also feature engineers, accountants, graphic artists, public relations practitioners, biologists, meteorologists, and others who play a critical role in space adventures.

Scenarios will take you into the past and into the future and include:

• A cosmologist and a computer graphics artist are preparing a presentation for public television on theories about the distribution of galaxies in the universe, and the placement of voids where no galaxies are found.

• An astrobiologist and an engineer discover the first positive biosignature data from an exoplanet near Earth. The findings provide a big surprise.

• Two recent high school graduates explore a star factory (nebula) in the constellation Orion, and using a video arcade game, they make speculations about the future.

While the props and costumes needed for scripts are minimal, the scenes promote deep learning. Get ready to be entertained and informed with Space Science and Astronomy Theatre.

Margaret Boone Rappaport and Christopher Corbally are a doctoral-level, anthropologist/astronomer team. Each one has published academic books in their respective fields, and they have both taught at college and high school levels for many years. They are actively engaged in education and outreach through the Human Sentience Project, LLC.