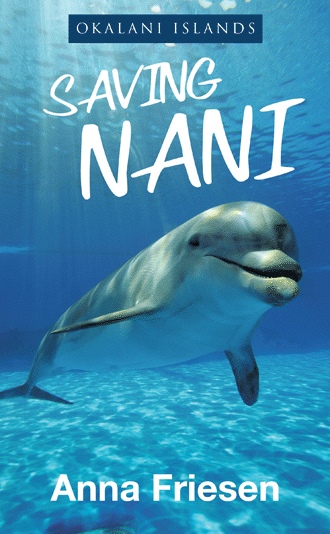 They crept forward silently now, carefully stepping over rocks and gently parting the leaves of plants so they could slip past. The voices got louder as they neared and it soon became clear that they didn't belong to the island children that they had been expecting.

They silently climbed one of the manele trees on the edge of the treeline so they could watch without being seen. The trees and plants didn't grow all the way to the edge of the cliff and on that wide, grassy open area stood two large Okalanian men. The girls settled on a branch well hidden by leaves. It soon became obvious what had caused the flashes: they were huddled over a large telescope on a stand and kept turning it and peering through it, causing it to wink when it caught the sunlight.

Leialoha wondered what they were doing. The island had many people that liked to watch the whales and dolphins but she had never known anyone to need a telescope for that. They came close to shore if one just knew the right place to go.

They could do that down in Dolphin's Cove, just on the other side of this cliff. It was a favorite resting area of dolphins because it was so sheltered from the wind, leaving the waters a calm blue.

And these men didn't look like the type that would be up here just hoping to spot a pretty dolphin. They were big and burly, with long hair black as the night and skin weathered by many hours in the sun. And they didn't look too happy at the moment.

"It's all Nahele's fault!" One of them shouted,waving his hands. "If he had been watching them like he was supposed to, we wouldn't have lost them!"

"We're going to have to work hard to make up for that lost shipment." The other man angrily kicked at the ground. "My contact says our buyer was not happy that we failed to deliver."

"Not to mention that we lost a fortune!" The first man spit out. "I've been up here for days and haven't spotted a single one!"

Leialoha and Keilani stared at each other with wide eyes. Who were these men and what had they lost that was worth a fortune? Leialoha was suddenly worried the men would realize they were there and what would happen if they did.

The second man was talking again. "We'll stay here a few more days and if we still don't have any luck we'll have to try somewhere else."

The first man shook his head. "No. I'm telling you, all the locals said the same thing. This is the best spot on the island. We'd be wasting time by going elsewhere."

"We have two weeks to fulfill that delivery! If the past five days are any indication, that's going to be hard to do!"

"Maybe we're missing them at night, Ke'ohi," the first man suggested. "We'll start watching for them at night as well. And look what I've got."

The man named Ke'ohi bent to see what the other man held in his hand. Leialoha strained to see what it was but could only make out a black object. She glanced at Keilani but she shook her head, indicating she didn't know what it was either. Judging from the smiles on the men's faces, they thought it was something good. Leialoha figured that probably meant it was something bad.

"That had better work, Makani." Ke'ohi was saying. "It'll be Nahele going to the sharks if we fail this delivery."

Keilani shifted in her position, accidentally breaking off a small branch as she moved her foot. The girls froze at the sharp crack and watched as it tumbled to the ground.

The men's heads whipped towards the trees, searching for something out of the order.

"Did you hear that?" Makani asked.

"Of course I did." Ke'ohi cracked his knuckles. "Were you followed?"

"Better go check it out to make sure." Ke'ohi's face darkened. "The last thing we need is some meddling islander ruining our plans."

Leialoha and Keilani looked at each other in terror as the men left their equipment and stalked towards the trees that hid them.

Leialoha and Keilani, best friends and cousins, are the princesses of Okalani. While their titles indicate they might sit around in pretty dresses all day and attend tea parties, that’s not the case for these two. They live in a beautiful palace on a tropical island, but like all girls around the world, they manage to get into plenty of mischief. Their goal is to stay in the good graces of the stern Queen Makaha.

Leialoha and Keliani plan to spend the last week before school starts having fun, including celebrating Leialoha’s twelfth birthday. They intend to explore the island and swim with Nani, a bottle-nosed dolphin. But on one of their expeditions, they discover a group of dangerous men on the island who have a mysterious purpose.

From humorous mishaps with the queen, to spying on the strangers and putting the clues together, the girls embark on a quest to save their beloved dolphins.

Anna Friesen loved reading adventure books when she was young, especially if they took place in exotic destinations. She has been to Hawaii twice and fell in love with the beauty and mystery of the islands, thus basing the fictional islands of Okalani on Hawaii. Anna now enjoys writing adventures books for her own young daughters.