The World outside Our Door 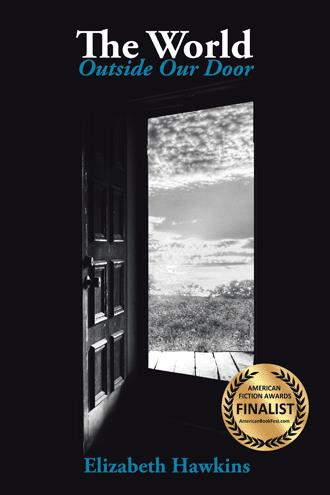 The gold Cadillac hearse pulled up in front of the Southview garden apartment complex that Liz and her mother Elsie shared with her father Fred. The driver from Pope’s Funeral Home arrived at the appointed time to escort the Smith family to the chapel where Fred’s wake had been held the night before. Liz gazed out the patio door, which faced the parking lot. She stood in the very spot where she and her mother found Fred standing one bitter cold February night with tears in his eyes. They’d returned home from an evening church service. The patio door was cracked open and there stood Fred, gasping for air. Liz’s father was in the final stage of emphysema, and his inability to breathe frightened him. He felt alone and abandoned. Terror filled his eyes. He knew he was dying. He didn’t want to die alone. Liz immediately called an ambulance and Fred was transported to nearby Greater Southeast Community Hospital. It would be the first of many calls and hospital stays for Fred over the next two years.

“The limo’s here,” Liz, still peering out the patio door, called to her family. How tacky, she thought looking at the stark gold vehicle. Are they kidding?

Liz preferred the traditional black hearse or even a white one - but this gold monstrosity was just hideous. Fred would not be happy with this, she thought. She found it easier to fixate on the gold funeral car than her feelings of incredible sadness. Nothing in her life had been more painful than Fred’s death. Yet she could not let the incredibly sad occasion and her grief engulf her. Liz would be strong.

The funeral was held on Thursday at noon. Although it was officially springtime, the temperature registered a cold 36 degrees. The last five days since her father’s passing seemed to move in slow motion for Liz. She felt frozen in time. Now standing at the patio door about to travel in the unsightly gold hearse, she still was not quite able to snap out of her trance. The family – eldest brother Rodney and his wife Joanette, Liz’s brother John and his five-year old daughter Yavonne, and Aunt Bernice, Elsie’s eldest sister from Indianapolis, Indiana – were all congregated in the living room of the apartment. Liz gathered her belongings and held open the door as the family filed out one by one to get into the limousine. Before leaving Liz glanced back into the apartment and scanned the perimeter of the room. Her eyes focused on the apricot swivel chair where her father always sat. In that moment it dawned on her that she would never see him sitting there again.

The ride to the funeral home was quiet. Liz peered out the window the entire time. Her father was dead and the memories of the past 21 years of her life with him slide-projected in her mind, one scene after another. Practicality was the hallmark of this clan. Even the way Liz’s mother informed one of her sister’s about Fred’s passing would have caused Fred to chuckle. Elsie tried for two days to contact her sister Willie Bea in Pensacola, Florida, to let her know about Fred. Willie Bea’s phone stayed busy.

“This gal has got her phone off the hook again,” Elsie said to newly arrived Bernice, mad as hell. “Always afraid somebody is gonna get in her damned business.” Bernice suggested she send Willie Bea a telegram. At Western Union, Elsie, still displeased about all the trouble she had to go through to contact Willie Bea, wrote a curt message that read Fred’s dead. Bernice bulked at the wording and changed it to read Freddie died. When they returned and told Liz the story, Liz cracked up. That was her mother, straight forward and to the point. Liz smiled inside thinking, Fred would have laughed his head off about all this.

Fred had always been Liz’s protector, especially when it came to her brothers. She remembered the time Fred had to hold back an outraged John, her second oldest brother, after Liz stepped on his and oldest brother Rodney’s model cars. They had worked hard gluing the pieces together, painting and decaling them. But the cars would be destroyed in one fell swoop when little Liz stepped on them, deciding that they were roller skates. Fred just home from work and still in his military uniform had to lift Liz over his head – her back parallel with the ceiling – to prevent John from pummeling her like a piñata.

“I don’t want to hear that baby stuff,” John shouted. “You always say that.” Fred often recounted this and other stories about Liz and her brother’s childhood to her, especially when he had been drinking. As she grew older his drinking would be a source of embarrassment for her and his retelling of these stories, annoying. But now her father was gone. His drunken stories seemed more precious than unnerving.

After a short 15 minute drive, the limousine arrived at the funeral home. Liz led the way as the family entered the chapel, lock step, where Fred lay. The night before Liz was in detached mode. She refused to ride in the limousine to the wake with the family, insisting on driving herself in her father’s 1976 pea green Chevrolet Caprice. The limousine ride would have made her father’s death too real. She couldn’t handle that yet. She also refused to help plan funeral arrangements. Liz hated discomfort. Planning her father’s funeral definitely qualified as heart-wrenching discomfort, so she decided to avoid as much of the inevitable as possible. As a little girl Liz hid in the closet, under the kitchen sink or under her bedcover in an attempt to escape from the rest of the world when she felt anxious. She pretended that the world outside her door, the world too gritty and harsh, didn’t exist. That way, she could detach herself from any unpleasant situation, if only in her own head. Thankfully, her brothers Rodney and John stepped up and helped Elsie with the funeral arrangements. At the wake Liz dreaded seeing her father in a casket and only looked from a distance. She allowed herself to be distracted by entertaining the many friends and family members in attendance. But today would be her last chance to see him, so she mustered up her courage and entered the chapel with a stiff upper lip, as her father would say. Liz stood in front of the casket and look down at her father. Sleeping. He looked as though he were sleeping. Liz raised her hand to touch him but decided against it. She felt like she wanted to cry but no tears came. You were a good daughter; she thought to herself, there is no need for tears or guilt. You did right by your father. She had attended many funerals in the past and often heard her mother say that guilt was behind all that hooping and hollering people did at funerals.

Liz’s Aunt Bernice stepped up and stood beside her. “He looks at peace,” she whispered, interrupting Liz’s thoughts. Liz did not reply. She held a tight grip on the side of the casket, muscles tense as if she were trying to prevent herself from falling over. She held her gauze on Fred’s face. She recalled him sleeping after working the midnight shift while she quietly played with her dolls in her parents’ room. She decided that this would be how she would remember him – not dead in a casket – but sleeping in bed after working the midnight shift.

It has been five days since her father’s death, and Liz still feels frozen in time. Left with twenty-one years of memories, Liz knows that John Frederick Smith was not a perfect man or father. She loved her father, but his drinking had always been a source of resentment. As she attempts to grapple with her grief and anger, Liz returns to her memories with the hope of finding the answers she so desperately needs.

Sixty-nine years earlier, little Fred Smith is born out-of-wedlock in the small town of Southport, North Carolina. As his life’s journey leads him from Southport to Virginia and then into the military, he eventually marries and starts a family. Still, he cannot escape the cloud of shame and rejection that secretly haunts him, sending his life in a downward trajectory that ultimately affects the lives of his children and grandchildren and leaves him wondering if he will ever find the inner-peace he craves.

In this poignant novel, the past intertwines with the present as an illegitimate child born during the early 1900s embarks on a dark journey fueled by a secret that creates generational challenges.

Elizabeth Hawkins is an author and blogger who earned a bachelor’s degree in communications from Trinity Washington University in 2017. She is the author of the book From Pigtails and Pinafores, and blogs weekly about the long-term effects of growing up a child of an alcoholic. Liz currently resides in Prince George’s County, Maryland.