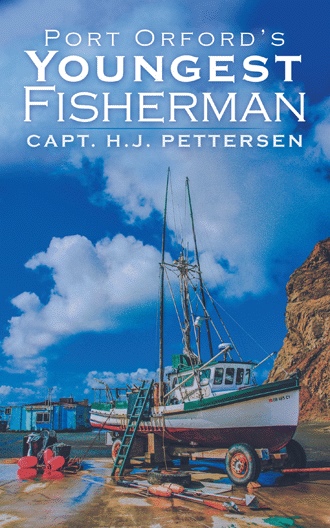 Cable timed the swells like Grandpa taught him and made the turn with no problems.

John was late in his turn. The boat was broadside and hit hard by the top of a huge wave that broke above the Orford’s wheelhouse. It didn’t stand a chance with the massive weight of the water. The Orford Reef took a gut-wrenching roll hard to port.

Everything in the wheelhouse went flying as John jumped upward, fighting to keep his balance. He landed flat-footed on the port bulkhead and prepared himself for the boat to roll completely over. The roll buried the port pole under the wave and put all the port gear into the water.

As the boat righted herself, the port pole shattered under the weight and sudden change of direction. John heard the awful tearing sound and saw the splintered wood, twisted metal, and shredded lines. The pole was dragging all its rigging, heavy, tangled and torn, in the water.

Things were happening too fast. John still expected her to go over and didn’t think to pull the engine out of gear. The propeller kept turning, catching one line then another, wrapping everything around the shaft at lightning speed. The engine screeched to a halt and died. The Orford Reef was laid heavy to her port side and was being driven by the wind up the next huge swell, helpless, and completely dead in the water.

John knew this was it. She would go over this time, and there was no coming back. He grabbed the VHF radio and while reaching for his life jacket, yelled, “Cable, help!”

When eight-year-old Cable Dent’s parents die unexpectedly, his grandfather, Phil, vows to raise him straight and strong, to make him a fine fisherman, respected among the fleet. The two live in Grandpa’s fisherman shack in the little coastal village of Port Orford, Oregon. With the help of his friend, Amy, Cable works through his grief and finds a new home.

He loves helping his grandpa on his fishing boat, the Tulla, and learning all there is to know about the sea. Then Grandpa suffers a stroke and Cable must take his knowledge and make a living for them both. Putting his heart and soul into the fishing life, he reaps the rewards and weathers the challenges.

A coming-of-age story for young readers, Port Orford’s Youngest Fisherman follows Cable Dent on his adventures as he overcomes adversity to become a successful fisherman and a man.

Capt. Pettersen has spent most of his life at sea including commercial fishing at the age of eight with his dad and brothers on the Pacific coast and in Alaskan waters and captaining a fishing boat at the age of thirteen in westward Alaska. After obtaining his Captain Oceans license, he worked and traveled the world. Recently retired, he lives in Longview, Washington, with his wife, Kat, and their dog, Charlie.