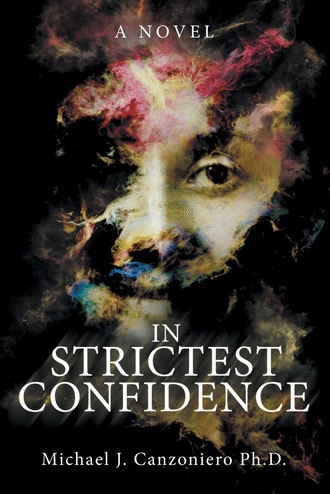 Like an artist intoxicated by the brilliance of a just completed masterpiece, he was giddy. Exhilaration was pounding in his heart; excitement flying inside him like a sparrow loose inside a house. In his feverishness, he took a hurried step back, then another. The second backwards step caused him to stumble over the dropped and now forgotten claw hammer he had used moments before to nail his work of art to the salmon colored wall. As he recovered his balance, he cursed the tool.

He knew he needed to calm down, to get control of the bird. He froze his position. Then he whiffed deeply a noseful of the fine claret mist that enveloped his creation. He slowly blew out and smacked his thin crimsoned lips.

The bird in his heart was calmer. Now his breaths came in long relaxed inhalations that caused him to loosen his grip on the paring knife with which he had cut and carved his wall hanging. He stood erect and examined the macabre sculpture he had completed. From a distance of three feet the view was satisfying. His cold creation brought an eerie, demented smile to his face.

"Look at all that beautiful blood!" he bellowed. The empty room seemed to shudder. "Wow! The way it's dripping, it looks like his shitty little life is just trickling away!"

A serene look overtook his smooth face. He sighed deeply then gave a gut-emptying exhalation. In mock grief he moaned, "One less cock-sucking bastard in this world!" Then he derisively added, "One more piece of scum sent straight to hell!"

As he gazed at the corpse of the man whose throat he had just slit and whose arms and legs he had nailed to the living room wall, he was suddenly seized by the urge to embrace the lifeless form.

He grasped the dead man's waist with his arms and buried his brow in his chest. His mortally wounded victim's still wet, still dripping blood covered his face and hands. He felt it moistening his cheeks and fell to his knees.

"Why'd you make me so mad?" he asked as he leered at his sculpture. "Don't you know I'm going to get all you bastards?"

"All?" another, sterner voice asked. "Just kill that goddam shrink!"

The first night William Hael spent with Kathy changed the meaning of nighttime. With Kathy William Hael felt peaceful when darkness descended. From that night it meant comfort; it was no longer the harbinger of abuse. In the years they were together, night promised the embrace of a loving woman; in the years of his childhood, the hours of darkness meant his alcoholic father would be coming home to revile and assault him.

But now he dreaded nighttime again. He dreaded the lonely nights without Kathy. Even more than the loneliness, he dreaded the beautiful dream that often came with the night. The dream always teased him, forcing him to see with his mind’s eye the pleasure he had always wanted but now could never have. The opportunities for satisfaction had been there throughout the years of their marriage but he had squandered the many chances he had to act on them. Now fulfillment was forever unattainable. For too many nights in the last ten months he had the pleasant dream which, in its impossibility, racked him with sadness and guilt when he awoke.

This night William Hael’s tiredness was overwhelming him. It was the fatique that wells up not from the body’s soreness but from the psyche’s anguish. It was the kind of exhaustion that is more emotional than physical. It had been another long, boring, unproductive day. He prayed God to send the squad an interesting case. He did not want tomorrow to be another day of sorting through cold cases. At this moment in the darkness he didn’t want to worry about tomorrow; all he wanted to do was settle into bed and hope the dream would not invade his psyche.

He laughed at himself for hoping. This night dreaming of Kathy felt inevitable. He knew tonight would be one of the nights the dream would come as he rested in the arms Morpheus. The only question was when it would come. On the nights when it came as soon as he lost consciousness, his guilt always awoke him and the self–loathing that followed would make returning to sleep and getting much needed rest impossible. However, on some nights, before the dream played out, he got in a restful first round of sleep. On those nights the dream would occur in the second round, the one that usually started after he got out of bed to pee and then returned to his bed to sleep some more.

He shut his eyes and waited. The air inside the house was cool. He could hear the furnace pumping away to produce heat; the unseasonably chilly weather had cooled his house. Outside, the gentle mist had stopped falling. A car backfired. All was still until a neighbor’s dog howled at the moon. It quieted when the dog was let in the house. Some people were laughing as they sang the song playing on a car radio. The neighbor with the dog told them to turn down the music and to get on home. It had been quiet for a while when his grandfather clock struck the hour twelve times. Consciousness was fading.

Bong! Bong! Bong! Three o’clock and no Kathy! Was this going to be dreamless night after all? Hael was hopeful as he made his way out of bed and into the bathroom.

After his trip to the bathroom, he was back in bed laying on his side of the half empty queen bed. As the minutes passed his hope of a dreamless night dimmed. He thought about staying awake rather than risk having the dream but his tiredness returned and he settled further into the bed. He shut his eyes.

Disgruntled Detective William Hael had prayed for an interesting case which would bring him out of the depression he had been in since a drunk driver killed his wife and son. He wasn’t sure getting the case of a brutally crucified bisexual school teacher was the answer to his prayer.

In Strictest Confidence blends a thriller with the psychological study of abused children. In this taut detective tale, the backstories of the suspects and the revelation of Hael’s own difficult childhood elucidate the horrors of child abuse. This novel examines the evolution of emotional disorders in adults who were abused children. Importantly, it discloses how attempts to handle those problems can lead to constructive resolution or to self-destruction.

This psychological thriller brings to mind David Pelzer’s A Child Called “It”, extending that narrative showing abused children as adults with deeply disturbing emotional disorders. While all the characters in this story are fictitious, it is a sad truth that abused children grow into adulthood with a greater likelihood of having mental health disorders. They are more apt to become alcoholics and drug addicts, more at risk for intimate partner violence and, because they are frequently depressed, more disposed to make suicide attempts. All these issues are seen in the characters who enliven this drama.

Reading In Strictest Confidence may evoke the author’s quandary: should being able to understand why someone acts in evil ways make their actions excusable?

As a young man living in the Bronx, I witnessed several friends wind their way down the road to drug addition. To help them, I decided to become a psychologist. I earned my doctorate from St. John's University in Queens, New York. As a licensed psychologist, I have expertise in the field of substance abuse. I have worked not only with the adults whose lives were ruined by drugs and alcohol, but also with the children who were physically and/or sexually abused by them. I am passionate about helping people become aware they can break free of their childhood roles, resolve their issues, and liberate themselves to enjoy healthy lives. My wife, Dianne, and I have been married for forty-seven years. We live in Shoreham, on Long Island. I’m the proud father of four adult children, and the happy Papa to my eleven grandchildren. I scuba dive, take photos, play golf, and love the Yankees.