Order of Nehor & the Brotherhood 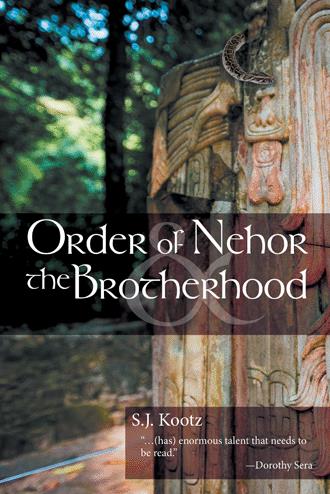 Raasah awoke, heart racing.  She had been having the nightmare again but, though her eyes were open, she was still reliving the aural chaos that ensued that awful night of the attack.  Sitting upright, she realized it was the angry voices and cries just outside their villa that had melded with her nightmare.  She pushed aside her dreaded dream.     “Hannah, what’s happening?”

Raasah jumped out of bed.  “You must help me get ready.  I need to see them….”

“Hannah, please hurry,” Raasah pleaded as she tangled her hair in her comb.

“Hush, Hannah, please, no more such talk.”  It was Marian by the door.

The din outside sounded like an angry mob now and was getting louder by the minute.

“Mei-wa-na, did you hear?  They caught some of the revolting slaves.  They must be taking them to the justice building.  I….”

“Granddaughter,” Marian’s voice was weary.  Raasah paused and looked slowly up into the kind, tired face.  “This will not bring your father back,” Marian continued in a far off voice.  She looked so fragile this morning.

“But I must see my father’s murderers, I must see their faces….”  Raasah looked pleadingly at her grandmother.

As Hannah straightened the veil over Raasah’s shoulders, Raasah looked over to the side table where the lopsided ball of rubber sat – the one she had fashioned with Abul.  Hannah had wanted to throw it out when she discovered it in her purse, but Raasah had snatched it up, clinging to it like it would erase all the terrible memories from that night.  Raasah pulled her eyes away from it.  Her resolve to confront her attackers swelled inside her, even if it included Abul.

“Oh, Hannah, no more fussing.  You must fetch Terjah.  He tried so hard to find them.”  Terjah’s discouraged party of searchers had returned after a long 7-day fruitless search.  “He needs to see we have them in custody.”

“Terjah was called for befores ya woke, chil’.  He’s dare now for sure.”

Raasah raised her head to search Hannah’s face. She suddenly felt very alone and fearful in the growing whirlwind of hostility.  “Please, Hannah, will you come with me?”

Raasah ran through the streets with Hannah’s fingers tightly gripped in her own polished hand.  Hannah was cursing something under her breath and breathing laboriously as they entered the plaza.  Pushing their way through the thick assembly, they found themselves in the front of the crowd abut of the judges platform.  The closeness of the frenzied crowd had ripped her veil from her head; hair had come loose from its plaits and now hung on her shoulders.  Hannah fussed and muttered as she recouped the plaits and tried to rescue the tattered veil.

There were actually six prisoners, five men and one woman.  They had been herded here with their hands shackled to their waists.  Their feet were dirty and bleeding and they wore multiple abrasions on their bodies.  Raasah was sure a small grey-bearded slave had a broken nose by its slight angle amid swollen bloodied cheeks; his arm was sliced red, flesh dangling.   Nevertheless, despite all the damage done on him, Raasah was stunned to recognize him as Abram, slave of Mosiahah, the jewelry merchant.  She knew him as a gentle, assiduous man.  He was just working off his debt from a crop that failed.  Raasah’s grandmother often stopped by the little farm with warm loaves of bread and squares of cheese to check on the welfare of his frail wife.  Abram and his wife were ‘decent people’, she remembered Marian saying one day as she packed food carefully in a small basket.  ‘They had just fallen on bad times….’

Neither did Raasah feel gladness and recompense as she explored the faces of the other five prisoners.  They didn’t look like murderers.  They humbly stooped with the weight of the shackles.  The thin ragged dark-skinned woman babbled silently as she leaned heavily on the thick tattooed arm of the tanned man to her right, her robe ripped immodestly displaying a bruised and torn knee.  She slowly lifted her face.  She also had been brutally beaten – both eyes swollen shut, her lips split but still forming unknown words.  The four remaining men were Lamonite carriage bearers, muscular and lean.  They were gagged but that didn’t hide the bruising and abuse they had endured by their captors.

Raasah felt a surge of pity for these prisoners.  She was suddenly relieved Abul was not among them.  Hannah was saying over and over, “Oh, ma dear, dear.  Oh, dear chil’,” as she embraced Raasah’s trembling shoulders.  Raasah searched the masses for her brother.  She did not know what she was supposed to do.

Someone in the crowd threw a rock at Abram, knocking him to the ground.  Many other rocks and stones followed and the prisoners bent over so as to use their shackled arms to try to fend them off.  A large youthful slave broke rank and somehow tore the gag from his mouth as he lunged towards Raasah.  Her heart raced as she pressed herself into Hannah who wrapped her in a hug and drew her back against the crowd.  The deep black gash over this man’s eyes did not hide the fear – she knew that look well.

“We’re innocent, innocent, girl!” he cried.  He was on his knees so close Raasah could smell the dust, sweat, and blood upon his dirt-smeared skin.  The crowd had hushed.  “You’ve been deceived,” he said bluntly, “living among murdererssss….”

The time is 82 BCE – during the rise of a remarkably sophisticated civilization in Mesoamerica.  Here, exacting mathematicians, expert astronomers, and, most significantly, the distinguished priesthood elite influenced the building of magnificent ornate cities and complex governance.  Raasah, the daughter of a powerful Nephite pochtecatl and a renowned high priestess, was a proud educated youth, nearing her age of maturity, living a privileged pampered life.  Then, in one horrific night of carnage, her life would change forever.

Miraculously spared from a vicious attack on her father’s caravan, Raasah desperately longs to understand why she alone survived.  In her search for answers, she becomes increasingly aware of the suffering and injustice around her – finding herself immersed in the growing evil that has permeated the very fabric of her beloved city of Ammonihah.  With deep pride, she also learns of the valuable role her father’s Brotherhood regimen played in keeping Ammonihahites safe.

Amid covert combinations of intrigue and tyranny, Raasah finds solace and aid from three unlikely comrades – an unconventional healer, a pious carpenter, and a forlorn orphan.  Together with the Brotherhood, they slowly uncover clues of who may be behind the murder of not just Raasah’s father but of the murders and disappearances of so many other honourable citizens.  As their queries progress, though, the priestcraft values and beliefs that have been engrained in Raasah are direly tested and become… disturbingly dubitable!

Order of Nehor & the Brotherhood shares a fascinating tale of greed and betrayal, as a lone massacre survivor discovers a devastating truth that both saves and condemns her.

“(Kootz’s) research into the architecture, customs etc. drew me right into that era of time with a desire to learn more about the culture of these people.  The flow of (Kootz’s) story, the intrigue and political corruption draws the reader smoothly from chapter to chapter and is hard to put down.  …ending as well was excellent and encourages the reader to delve into book 2.  I hope this trilogy flies off the shelves….”

S.J. Kootz is a history buff who is fascinated by the mysterious lives of the ancient inhabitants of Central America. She relies on research and recent enlightening discoveries to transport others back in time to experience the extraordinary courage and faith of the Nephite people. Kootz currently lives in Coaldale, Alberta, Canada. This is the first book in an intended trilogy.