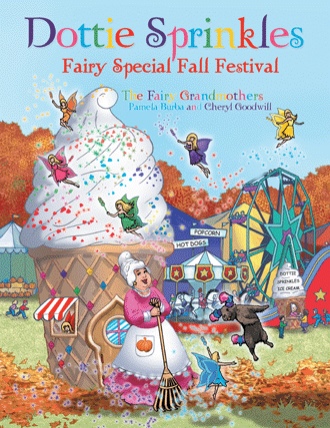 Sydni and Lori had found out fairy magic was very real when they had spilled fairy dust on Audrey’s bunny. That had been a fairy special day!

Dottie, her invisible dog, Twister, and the fairies would be at Ferry Harbor’s Fall Festival with her booth of fairy special ice cream kept cold with fairy magic.

The multicolored fairy Glitterina and her fairy team had created new fall sprinkles, Poofy Pumpkin Pops and Candy Corn Crunch, just in time for the festival.

It would be a fairy special fall festival.

Dottie Sprinkles loved this time of year, when the leaves turned to the most beautiful fall colors of gold, red, and orange.

As she walked to the festival in the park across the street, no one would have guessed the lady with the hair shaped like an ice cream cone was not alone.

Only she could see the magical invisible dog next to her, and only she knew the beautiful butterflies around her were really fairies in disguise.

Sydni and Lori found Audrey and Cheryl sitting under the big tree. Lori waved to Mikie, Shari, and Jon, who were in line for the Ferris wheel.

Lori’s fairy special bracelet from Grandma Clara jingled, which made Audrey notice the fairy charms. Lori showed her the bottle charm to put fairy dust in.

Sydni showed them her heart necklace from Grandma Clara, but did not mention that it came with a second necklace and a note that said “Give this to a fairy special friend.”

Audrey shared exciting news. “Remember when the fairy dust caused my bunny and her baby bunnies to lay wonderful candy eggs? Every day we have so much candy that my mom is opening a candy store named Yasmin’s Yum-Yums.”

Cheryl heard a noise and turned her head, causing the sun to make her long braid shine like gold glitter.

A voice coming from behind the tree made them jump. Pammy had been listening to them!

“It is pretty enough to cut off and use as a belt,” Pammy said.

“You leave my braid alone, Pammy!”

Nicknamed the PJS, Pammy and her brothers, Joey and Stevie, were known for teasing.

“Ignore her and she’ll stop teasing,” Audrey said as she motioned for them to follow her to the carousel.

Cheryl turned around, and Lori saw that her braid was gone!

Lori yelled, “Cheryl, your braid has been cut!”

“What!” Cheryl screamed and ran to Pammy.

“You give me back my braid! I know you cut it!”

Pammy laughed and said, “I don’t have your braid, but you sure do look funny without it.”

Lori noticed a small boy named Sean looking guilty. “Did you take the braid?” she asked.

He handed it over and said, “I heard you say it was real gold,” and then looking down he said, “I thought I could trade it for one of Dottie Sprinkles’s fairy special ice cream treats.”

Surprised by the apology, Pammy said, “Whatever!” and walked away.

Lori said, “Let’s try to fix it with the gold fairy dust in my purple pouch.”

Cheryl was worried and said, “What if it turns my braid purple like it did Audrey’s bunny?”

Sydni held the braid in the place where it had been cut while Lori sprinkled gold fairy dust on it. “Careful,” Sydni warned her. “You spilled it on my arm, and I don’t want to turn purple either!” She giggled.

Lori took the braid from Sydni and placed it back where it had been cut. She said, “Braid, now repair where you came apart from Cheryl’s hair.” Then she let go of the braid. “Ta-da, it worked,” Lori said.

Cheryl could not believe it!  It was truly fairy magic that fixed her braid! She thanked Lori and then ran to the carousel to show Audrey.

Lori turned to thank Sydni for her help but didn’t see her sister. “Sydni, where are you?”

“I’m right here beside you,” she said.

Lori said, “Oh no, the fairy dust made you invisible.” 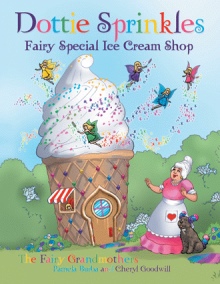 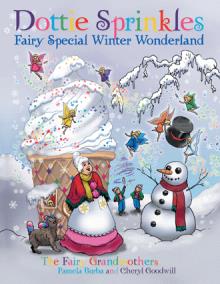 Dottie Sprinkles Fairy Special Ice Cream Shop in Ferry Harbor is usually full of children enjoying ice cream treats while wondering if the fairy magic on her wall painting is real. But today, the shop is closed. Dottie, her invisible dog, Twister, and the fairies are attending Ferry Harbor’s Fall Festival with her booth of fairy special ice cream kept cold with fairy magic.

Twins Sydni and Lori are enjoying the festival with their friends. But when the gold fairy dust from Lori’s purple pouch makes Sydni invisible, the girls find themselves on a magical adventure. They learn even more about the fairy magic that only true believers in fairies can have.

Pamela Burba and Cheryl Goodwill, authors of Dottie Sprinkles: Fairy Special Ice Cream Shop, are back with the much anticipated second book in the series. Get ready to enjoy even more fairy special magic that will delight both the young and the young at heart.