Mea Culpa: A Way Out of Hell

Land of the Hummingbird 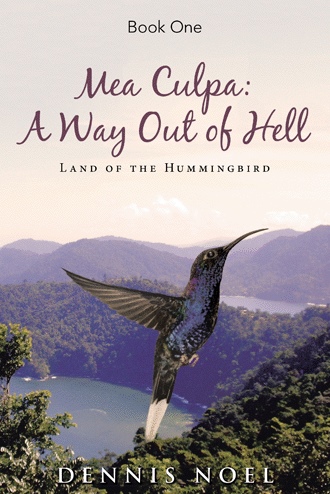 Later that week there was a Shango Feast at Mother’s, celebrating not only our mourning ceremony, but also her annual ritual for the Orisha gods. I was now part of an inner circle that saw the rituals up close and personal. Suffice it to be said there were sacrifices of livestock, culminating late in the evening with the sacrifice of an unblemished young bull. That was a moment I would never forget.
The palais was filled to capacity with sweating bodies, the drums whipping the dancers into a frenzy. Norbert was in his element using his tightly bound drum to call out to the gods. He knew the calls. Iroco answered first, possessing several of the dancers with his spirit. I was spellbound; I saw people possessed by invisible foreign entities perform incredible feats of strength and flexibility. A wild-eyed man, brandishing a razor-sharp machete, began wheeling around the room. As he approached, I wanted to run, but rebuked my fear and continued dancing, glancing covertly at the man. He gyrated around the room swinging his glistening blade centimeters from the vulnerable flesh of the rhythmic bodies. It was a miracle that no one was hurt. The man appeared out of control, mad, intoxicated (very possible, since Norbert and his crew had copious amounts of liquor on the premises much against Mother’s wishes). He was unquestionably possessed by an unearthly force, and oblivious to anything or anyone except the insistent beat of the drums.
Norbert was truly the drum’s master. He knew the drum call for each god, and which note to hit to have a particular god possess someone. It was said that he often used this power on any woman he desired who was in the palais dancing to his drum. One definitive drum note, and she was his. Tonight a mad man was his target.
The black bull was led into the palais — powerful, huge, strong. Two men held onto the rope around the animal’s neck, one on each side. The dancers formed a circle around the creature, all except the dancing man with the machete. He approached the bull, not even examining the young beast, only twirling his weapon around his head as he danced to Norbert’s tune. Suddenly, the beat changed, subtly at first, then insistent, demanding, with more staccato cries. I felt my pores raise. The man was beside himself. He was almost frothing at the mouth, his eyes rolling everywhere, the blade poised towards the heavens. As the drums reached a crescendo, the blade swung in a determined arc downwards to the bull. The sacrifice stood its ground in front of the man.
It was a swift blow. I saw the bull’s head separate from the beast’s shoulders. I could not believe my eyes. With one blow, this possessed man had cut through skin, sinew, blood, and bone of a mature, young bull in its prime, and had decapitated the animal. Well, almost. The bull’s head was still attached by a small fragment of skin below the animal’s neck. . . barely.
The young bull dropped immediately to its front knees, dead before the knees hit the ground. As one of the handlers produced a knife to cut the skin below the neck — that still held the head attached to the body — Mother approached with a large calabash bowl to place under the animal’s jugular that was spouting the red life force to the ground. The bowl quickly filled with the warm liquid.
The drums were temporarily silent; Mother mixed in olive oil with the blood in the bowl, voiced a ritual incantation, and took a drink of the concoction. She passed the bowl to one of her ladies, and lifted the dead animal’s head high in the air before placing it, dripping blood, onto her own head. The drums began again in earnest, this time in an ecstatic, celebratory cadence. The calabash was passed around the room with everyone taking a sip.
Mother led the dancers around the palais, the bull’s head prominently adorning her own, a surrealistic scene that juxtaposed the realities of the archetypes of powers, thrones, and principalities — on a collective consciousness. It was a glimpse into another dimension, a look behind the curtain of every day sameness, a moment of clarity about the hidden nature of man.
Deep in the core of my being I knew that I was just a voyeur, a collector of insights, a hummingbird flitting from flower to flower, hunting the elemental nectar — clean, free, beautifully serene. It was an idealistic ambition. All I wanted was the heart of knowledge, in all shapes and sizes: the ability to decipher the jig-saw puzzle into a transformative reality. And I knew that the acquisition of knowledge required a search for the hidden, the buried, the ancient. It would wander through varied geographical terrains, separated by oceans, mountains, rivers, and lakes. It’s divided amongst religions, faiths, beliefs, races, and species. It is shared between the sexes, and exposes itself in self-awareness when touched by the vulnerability of intimacy.
I fully embraced my archetype of Observer, and Recorder; documenting the knowledge gleaned as a witness to Life’s mysteries. I tried to be dispassionate about it all (and failed), even as I stored away the vision in its secure place, for a purpose still to be determined.
I have never wavered in my submission to the authority of Jesus Christ, my redemption by His Blood, and His sacrifice for my sins. I have never served any God but the God of Abraham, Jacob, and Jesus. But in my search for answers I have wandered near and far from Christian dogma, and have had to remind myself a few times: the word of God is inviolate.

From birth to death, we pass the same milestones, forks in the road, and dead ends. Each next step may lead us to disaster.

Dennis Noel, a native of the dual-island nation of Trinidad and Tobago, shares lessons from his own journey in book one of his life story.

His prime directive is to show the interconnectivity of everything in the universe, between universes, and between beings. His story is connected to others—and their stories are all part of a much bigger story.

He reveals regrets many of us choose to ignore. Some of these lie buried deep in the recesses of our minds to be forgotten or diluted with enough justifications to dissolve any real ownership, but he seeks to move toward a more enlightened path.

He also looks back at the many times in his life that help was given, sometimes in the form of angels disguised as strangers or via doors opened with whispers urging him closer to faith.

Dennis Noel earned a bachelor of science degree in political science and economics, and an MBA in corporate finance, both from the University of New Mexico. He’s also the author of poetry, plays, and short stories. He is committed to living a life that will take him to his creator.