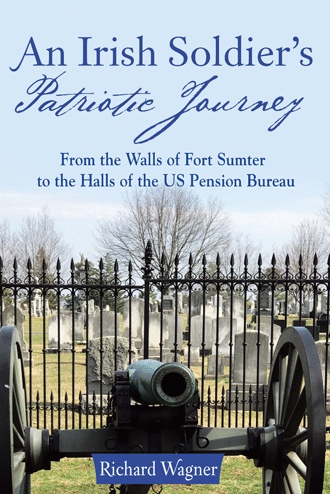 “Your flag is down … you are on fire, and you are not firing your guns.”

When John Doran enlisted in the First Regiment of US Artillery in 1860 to experience changes in his boring lifestyle, it is doubtful he expected such a transformation that occurred in the last few months. He suffered from unceasing hunger pains, sleep deprivation, constant pain in his crushed foot, and the sight of the enemy building batteries that encircled the island fort. At age twenty-two, he was living in a dark, damp environment with the constant threat of losing his life by a planned attack or by accident.

About three o’clock in the afternoon on April 3, 1861, reminiscent of the Star of the West incident a couple of months earlier, another ship flying the American flag, Rhoda Shannon, was fired upon by Southern batteries. The Rhoda Shannon pilot, thinking the Confederate gunners could not see his flag, raised the American flag higher and received even more rounds. In confusion, he turned his schooner out to sea. Captain Truman Seymour was sent to investigate the incident and discovered that the ship was loaded with ice and bound for Savannah; in a dense fog, Captain Mounts mistakenly steered his ship into Charleston Harbor.

Once more the men inside Fort Sumter feared such a suspicious incident might spill blood. The national flag had been fired upon again. When was it time to respond? How much more humility did the men at Sumter need to endure? There were no answers, only unanswerable questions.

On April 8, rations were reduced to half; “Our supplies of breadstuffs was fast giving out and the Carolinians knew it … on the 11th one biscuit is our allowance and matters seem to be rapidly coming to a crisis.”  Additionally, the weather in the Charleston area could not break from winter’s grip. The combination of widespread rain and wind created an uncomfortable chill and dampness inside the walls of Fort Sumter. Surgeon Crawford recorded a growing number of bronchitis and pneumonia cases and a couple cases of dysentery.

Major Anderson wrote, “My command is in fine spirits, but I see that the long confinement, with the constant excitement, is telling on them. None of us could endure fatiguing labor for any length of time. I shall direct all the command to sleep to-night in the bomb-proof.”

For those weary soldiers in the fort, April 4 was like any other day—eat a biscuit and rusty pork, work until exhausted, and watch the Southern batteries encircle them as they prepared to attack the island fort. Those in the fort hoped the attack would not be at night.

In Washington, their fate was being earnestly discussed. After days of debate and planning, President Lincoln determined to send a relief expedition to Charleston under the direction of Captain Gustuvas Fox, a former navy captain who had recently visited the Charleston area. The plan was to send a transport escorted by warships that would only become involved if fired upon by Confederate batteries. Supplies would be transferred to boats at night then delivered to Sumter.  This plan looked good on paper, but it would be dramatically more difficult to carry out even under the best conditions. From the beginning of the mission, the officials had one disheartening problem after another. A massive storm at sea racked the trip to Charleston. The fleet was scattered; one of the ships in convoy had conflicting orders and was sent to another fort. Once the ships arrived in the Charleston area, the high seas prevented the rations from being delivered to the fort.

President Lincoln decided to give advance notice of Captain Fox’s arrival.  Theodore Talbot and a War Department clerk, R. S. Chew, notified the South Carolina governor of the fleet’s coming in an interview on the evening of Monday the eighth of April.  By informing the Confederate officials before the arrival of the fleet, President Davis and his cabinet were forced to react. If the Confederates fired on ships carrying food for hungry men, they could incur the wrath of humanitarians and potentially blamed for beginning a civil war. However, if they did nothing, the sovereignty of the Confederacy would be in jeopardy. Their options were limited; the horns of the dilemma were sharp. Lincoln had brilliantly separated the delivery of rations to relieve the malnutrition of the men from troop reinforcements. Additionally, the president hoped that the move would rally the North to the cause. One historian called the move “the first sign of the mastery that would mark Lincoln’s presidency.”

Inside the fort, extra clothing and materials from the hospital were gathered to sew needed cartridge bags—even Major Anderson’s socks were confiscated. The sewing process was slow, with only six needles in the fort and those in the calloused hands of men who could not efficiently use them. Seamstresses, the soldiers were not. Commander Anderson stopped the sewing the night of April 12 as they were running out of clothing and hospital materials.

For John Doran and his cohorts, their dire situation continued to grow. By April 11, the soldiers struggled, bread rations exhausted, rice damaged by broken glass, and meals of rusty salt pork.

John Doran wrote to the United States Bureau of Pensions toward the end of his life with a pleading message:

“I have been compelled to cease all work, and I am unable to support myself and family on the small pension allowed me. I am a broken-down old man and pray for an increase.”

It was a sad end for an Irishman who had come to America in 1857 looking for a better life—someone who learned the trade of iron molding before enlisting in the First Regiment of United States Artillery.

Doran participated in most Civil War encounters from Fort Sumter to Appomattox, earning promotions from private to sergeant while serving in the “fighting first” until 1874.

During the war, he suffered starvation, sleep deprivation, extreme fatigue, an eye injury impairing his vision, a foot injury causing a debilitating limp, an ear injury, and numerous other infirmities in the line of duty.

Somehow, he survived to return to his family and iron molding in Meriden, Connecticut, in 1874. But injuries haunted him, and he was forced to give up manual labor and fight for the next twenty-one years for a small stipend for his military service.