THE TALE OF FREDRICA THE FOX

by Libby Davis & Illustrated by the Students of Vail Christian Academy 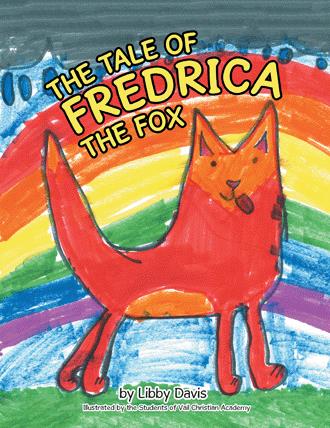 Once upon a mountaintop in beautiful Vail, Colorado lived a lovely vixen fox named

Fredrica. Her coat was a unique color of red, yet it was her magnificent tail that made her

gorgeous. It was much fuller and more beautiful than all the other foxes in that region of the

Rocky Mountains. She often heard the male foxes say, “Now that is one foxy fox!” Fredrica

would give them a casual glance and flick her tail at them which in fox language means,

Near Fredrica’s den in East Vail was a large apartment house. At night when she was on

exciting to her keen fox ears.

many world-famous restaurants in Vail. They loved their music and nightly gatherings.

the apartments, but her mother’s voice always echoed in her ears saying, ”Beware of

humans. They will think your fur is ‘to die for’, and that they would look foxier in your coat

One night our beautiful vixen fox was feeling sad and lonely. After seven months of living

together as a family, Fredrica had released her ten grown kits into the wild, and had said

good-bye to their father, Maximillian. In a state of despair, she aimlessly headed towards

the festive sounds at the apartment.

The bright Vail moon illuminated the scene. She saw no one as she cautiously surveyed

the territory. Then one of her keenest senses took over. The same nose that allowed her to

smells to ever hit her pointed fox nose. She walked toward the smell, and then noticed

steam rising around it.

Very slowly, she moved closer. Seeing no one, she quickly ran to the mysterious steaming

sight, sniffed and examined it, then grabbed the large tasty treasure with her sharp teeth.

Back at her den, she quickly devoured the cheesy pizza finding it to be the best culinary

experience of her young fox life. Wrapping herself with her magnificent tail, she fell asleep

with a full belly, and a sense of accomplishment for her bravery.

As the moon arose in the clear Colorado sky the next evening, she awakened to a hunger

she had never experienced. The memory of the strange new food led her straight back to

the apartments. To her delight the steaming plate was left at the same place as the night

before. She cautiously grabbed the grub and took off. A sense of adventure lured her into

this game every night. Like a fish chasing a colorful lure, she never stopped to think that

there might be a “hook” in those tasty treats set outside for her nightly.

Keynote: If you have ever wanted a second chance after facing the consequences of

misbehavior, then you will love The Tale of Fredrica the Fox . Pride and disobedience lead

this Vail, Colorado vixen fox into danger as she innocently deserts her fox life and begins

living with a group of young people. Pride tells her she is more like a human than a fox. The

miracle of redemption and second chances become a reality. Follow her amazing story, as

she becomes a legend for generations of foxes everywhere.

The envy of all the foxes in Vail because of her unique, red coat and magnificent tail, Fredrica fails to heed warnings about humans. She’s lured into a community of young people where she eventually finds herself living as their “pet” with all the finer things of life such as pizza, junk food, and a warm place to sleep.

However, environmentalists in the area open the eyes of her new friends to the harm they’re doing to her through their kindness. That means no more breakfast burritos for Fredrica. She sees herself as a forlorn forgotten fox, and for days she shivers in the cold den from lack of her thick beautiful coat and tail, destroyed by the junk food diet. Her fox life flashes before her eyes, and a sense of doom creeps over her. She recognizes the consequences of her folly and vows to be a humble and wiser fox.

This picture book for children tells a story of redemption and second chances through Fredrica’s struggles with pride and disobedience.

Libby Davis has been an educator for thirty years. Following Hurricane Katrina in 2005, she was one of fifty Houston teachers assigned to teach refugee children from New Orleans that were sheltering in the Astrodome. This native Texan was first introduced to professional writing as the niece of two acclaimed journalists, Wick Fowler, and Elizabeth Fowler Draper. Wick was a war correspondent with Ernie Pyle in World War II, and was a columnist for the Dallas Morning News. Elizabeth is the author of twelve books of poetry that were published in the 1940’s, and was a columnist for the Chicago Sun Times for many years. In the 1970’s while living in Vail, CO, Libby acquired a love for the outdoors and Colorado wildlife. The beautiful mountains called her back to Vail in 2015, where she taught art at Vail Christian Academy. Through the combination of an unplanned encounter with a fox, and her vivid imagination, the story of Fredrica the fox was created. Her art students created the illustrations for the book, which is the first one in a series called Vail Tails; fictitious stories incorporating facts about the area’s wildlife. Libby now resides in Houston, Texas, as a mother of two grown children, and the grandmother of three young grandsons; Tyler, Travis, and Liam. Despite having Parkinson’s disease, she continues to stay active as a grandmother and author.