A Wonderful Stroke of Luck

From Occupational Therapist to Patient and Beyond 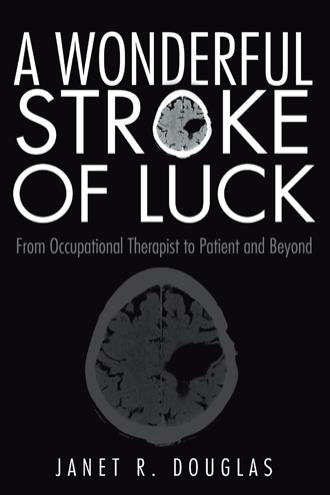 The day had started out with so much promise- enough blue in the sky to make a pair of trousers for a sailor, an indication that it would be a dry and sunny day, perfect for a garden wedding. I had driven two hours from the home of friends in the village of Newton Blossomville, every bit as beautiful and bucolic as it sounds, early that morning. Driving a rented Mercedes, the world was my oyster- I was queen of the road. I was pleased with the complimentary upgrade, Bruce, who is not a fan of ostentation, was mildly embarrassed.

Lying down, my head on that man’s jacket, I became acutely aware of the smell of freshly mown grass, shades of Mr. Foster, the school groundskeeper, mowing the tennis courts outside the classroom window. I pictured Dad and the boys pulling on their cricket kneepads, to play for the village team.   I conjured visions of cream tea laid out, cucumber sandwiches and scones piled on trestle tables in the shade of fragrant lime trees, waiting to be set upon by players and spectators alike. Lost in reverie, unconcerned for what awaited me, anxious only for the focus of attention to be the bride and groom and not me, the aunt lying on the grass, I tried to blend in with the scenery, to avoid the curious glances of people moving past me. I recognized some of the faces, relatives and friends but others were not familiar.  Phrases started popping into my head from all over the place, a line from a book, a snatch of a song:

“It is a fact universally acknowledged that a single man in possession of a good fortune must be in want of a wife.”  Is Mr. Bennett at Jonny’s wedding?

The songs grew more persistent, more discordant. I tried to sing along but my mouth was mealy. There was a strong smell of gas. I traced it to the cupboard under the stairs where the meter is, in the house where I grew up.  The vegetables were in neat rows, visible from the kitchen window, there was a bicycle parked outside the window for Tony to escape his share of the chores. Mum had gone to take care of Grandma Rimington who was struggling with the after effects of a stroke.  The air was redolent with late summer flowers and drying, musty, crackling leaves.   “We plow the fields and scatter the good seed on the land but it is fed and watered by God’s almighty hand.”

Harvest festival hymns, blended voices accompanied by a roaring organ filled the space between my ears.

A physician among the guests came over to confer with Bruce. They decided to call an ambulance, to take me to the hospital. It seemed like a good idea.  I didn’t want to be a spectacle any more, no more sympathetic clucks, no more offers of medicine, cups of tea, cold towels or ice.

“I don’t want to ruin the party” played again in my head, louder this time.

“Please let me slip away un-noticed.  At the hospital, they can give me something to make my stomach feel better and then bring me back in time for the cutting of the cake,” I mumbled into the air around me.

As we waited for the ambulance, the desire to be somewhere, anywhere else, was overwhelming.  I wanted to melt into the grass like an ice cream dropped by a passing child.

A crowd gathered around me.  Some of the faces were familiar, others not. There were a few of my former patients, a gaggle of co-workers, even someone from school. Past and present were starting to blur and I was not thinking clearly.  Struggling to remain coherent, I repeated   “Please leave me here, I don’t want to ruin the party.”

“He sends the snow in winter, the warmth to swell the grain,

The breezes and the sunshine

Suddenly, my entire left side was buzzing, throbbing, tingling with giant pins and needles. I looked to see if something was biting me, stinging me, a nest of ants, a swarm of bees, a snake?  Had I, unwittingly, disturbed some malefactor in the grass?

The buzzing in my arm swelled to a deafening roar. Could anyone else hear it? Then I felt an electric current jolting through me, lighting up nerve pathways like a subway station map. Sharp, burning, jerking, I felt the cranial nerves.

A Finn and German Viewed Some Hops”.

A mnemonic for the cranial nerves, learned in my occupational therapy training, took on a painful identity.  I could feel them all. The side of my face was illuminated, then my eye, my neck and upper arm. The buzz spread down my arm like an electrical current through water, sizzling radial, median and ulnar nerves until they stood out, as if drawn in pen on my arm.  They were drawn in pen on my arm a long time ago by the professor, a mentor in my early career.

My leg twitched, as if in response to a hard tap from a patella hammer tap on my kneecap. The stinging stream coursed down my leg, past my ankle and stabbed my foot.

I wanted to cry out at the discomfort. It was not pain but a distinct sense of having been struck by lightning or having grasped an exposed, high-voltage wire. It went on long enough for me to picture myself in the electric chair, facing execution for some unspeakable crime. There was no movement perceptible to myself, or others but on the inside, half my body was convulsing with the feeling of an elbow banged on a hard surface. Then a buzz saw ripped through and cut me in two, top to bottom, left and right cleaved from each other, forever. Abruptly, it stopped. Then there was nothing. Struck stricken, stroke…

When an occupational therapist suffers a massive stroke while attending a wedding in her native England, she can’t believe it.

Janet R. Douglas emerges from a coma weeks later at a Chicago hospital where she once worked. Her left side is totally paralyzed, her eyesight impaired, her memory and identity lost.

Trapped in the present, she finds herself talking in German even though she has seldom spoken the language since high school. With no understanding of the severity of her problems, she resists therapy, thinking she doesn’t need it.

Despite all odds, she returns to her high-powered job only to find herself cast adrift by a corporate reorganization. With time on her hands, she carries out her own research to find out how damage to one specific part of the brain affects behavior.

From the perspective of both therapist and patient, Douglas explains the impact of stroke, how it makes the simplest tasks difficult, and how the visible disabilities it causes are  just the tip of the  iceberg.

Join Douglas on a decade-long quest to recapture her identity so she can once again enjoy family, work, and travel in A Wonderful Stroke of Luck.

Janet R. Douglas, an occupational therapist, specialized in the treatment of hand injuries at Royal National Orthopaedic Hospital in London and worked with the World Health Organization before moving to the United States of America. She was director of occupational therapy education at the Rehabilitation Institute of Chicago before earning a master’s degree in public health. She worked at Grant Hospital of Chicago before joining a human resources and risk management consulting firm. She’s written three textbooks and lives in Riverwoods, Illinois.