FoJo and the Mighty Wave 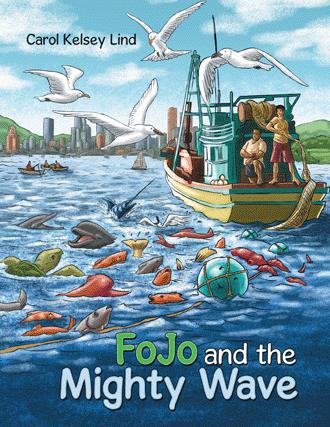 One day the sky became dark, the water roiled around us, under us. The net was uncontrollable, shaking up the ocean floor. The fish were frightened. Before we knew what was happening a gigantic black ship pierced our net. It was followed by hundreds of squawking sea gulls. Suddenly the main rope on the net was torn open and all the floats and fish were tossed to the sea!

What was happening? Was I free? Could I float forever on my own? Where were FuJi, Fiori and Fenton? Would I ever see them again?

Soon a beautiful wave beckoned me. "Come Fojo, ride with me and I'll take care of you!" Eventually he discovered his brothers were riding the same wave. He was so relieved. But would, could they stay...on the same wave forever?

FoJo is a round, glass, iridescent float manufactured by a Japanese company to secure the heavy gill nets used for fishing in the sea. This isn't a fun job for the glass floats because many of the fish they hold captive are their friends.

FoJo dreams of escape, and one stormy night he takes the opportunity. He is set free from the gigantic net and embarks on a seven-year, 6,000-mile journey across the Pacific Ocean to reach a soft, sand dune in Oregon. Throughout his adventure, FoJo becomes a close friend of the Mighty Wave who carries him through the many challenges of the sea.

It isn't an easy trip, and FoJo faces many tests. But he learns to work with Mother Nature to realize his wish for a better future.

Carol Kelsey Lind has lived most of her life near water. As a four-year-old she became intrigued with the ripples that resulted from dropping pebbles in the lake at her family home. This led to a lifelong passion for understanding the importance of water. As a teenager she educated herself by reading Thor Heyerdahl's "Kon-Tiki", the classic story of one man's solo journey on a raft across the Pacific Ocean.

Carol, a University of Colorado graduate, was fascinated by the fact that the earth is approximately 98 percent water. She continued to pursue issues specifically relating to the state of our oceans, sea life and climate change. She was also influenced by Kenneth A. Brown's "Cycles of Rock and Water" which expanded her comprehension of the broader impact of water to the earth. From 2002 to 2015, the author served in various leadership capacities including the Board of Directors of the San Francisco Bay Institute and The Aquarium of the Bay (bay.org) which she chaired from 2006 through 2010.