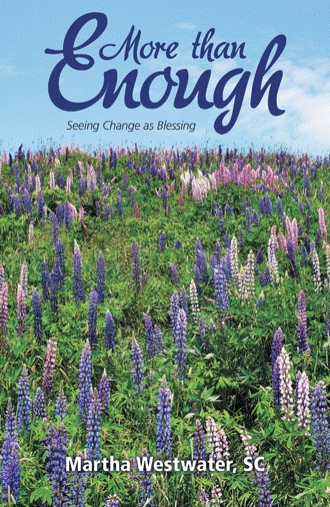 pp.62-65 in manuscript  During the third week of recovery when I was in a ward with three other very sick people, a friend brought me a tape of Cardinal Bemardin's life. I could not read, nor hold a book; formal morning and night prayers were impossible, but I could listen to a tape. I think I really began to pray when I heard how Cardinal Bemardin quoted St. Paul: ''Christ Jesus emptied himself taking the form of a servant" (Phil. 2:6). That one phrase, "emptied himself' become my life line. I discovered meaning in the emptying process which the aftermath of the accident entailed.  In the long tedious months ahead, alone in my hospital room trying to pray, I simply let myself flow with the emptying. I'd find myself staring out the window watching the pigeons on the hospital roof. Peacefully gazing at the birds, watching their frenzied flights and landings, saying nothing, thinking nothing, just being still, watching without words, content to be in harmony with my world as it was. This was my prayer.

Sometimes I wondered whether the experience was real or imagined prayer. I really can never be certain about what constitutes true prayer. However, this I know-I feel the presence of God when I least expect it. I cannot will or manipulate it in any way. The Godhead is far, far beyond my petty attempts to capture It. Fleeting are these moments when we sense the peace of God's presence, But in silently watching the birds I entered into timelessness and felt the power of God's love when I least expected it. I can't explain it further. I know my faith in God whose love was made visible in his care of the birds saved me from despair.

Not that I did not worry about my situation! My legs had been broken severely in several places. There was the possibility that I might never walk again. My body seemed not my own. In its weakness and pain it became a harsh tormentor and I desired to escape from it. The question I asked myself constantly was: Why-was I saved and my two companions killed? Of course there was no answer. Neither was there any answer to those other riddles: Why did I take my car when it had no airbags?Why didn't I stay in the front seat beside Agatha and let Betty remain in the back of the car? Hour by hour, day after day, the questions re-surfaced relentlessly and the answers were hopelessly elusive.

I wonder how the three sisters at Elm Avenue were ever able to cope with me. I was still recuperating more mentally than physically, but I always recalled the first meeting I had with a woman psychologist after the accident. I don't remember her name but on her first visit, out of the blue, she asked me very directly: "Would you rather be alive or dead?" I did not answer. She asked again, "Would you rather live or die?" Her expression indicated that she did not expect to have the answer next week. She wanted it then and there. Haltingly, even reluctantly, almost sulkily, I stammered, "Well, I am alive, am I not? That's the fact of the matter." "So," she continued, '\would you rather be alive or dead?" I had to answer her question ''I want to live. It was a simple reply but it was enormously critical because I had to

make a conscious decision to accept the burden of life--painful as that life had become. My psychologist made me articulate my decision to accept life over death, to put some order into the chaos of the crash. If order follows life, then a good life results when we accept the order life imposes...

What is it that makes most of us resist change? In this book, Martha Westwater takes her readers through the tumultuous times after Vatican II, when centuries-old assumptions about what constituted holiness were challenged. The church’s call for renewal invited women religious to discover again the roots of their call and the urgency of the needs of that time. Martha shares how she and the sisters with whom she lives seek to move into the future with integrity and passion.

Perhaps in every life there is a single moment of insight that defines the soul’s journey more than any other. For Martha, it occurred on October 9, 1997. The twist of fate that allowed Martha to survive a horrific car crash while her two companions died gnawed at her as she wrestled with every survivor’s question: “Why me? Why did I live?” You will discover that the answer is something only the one who asks the question can articulate. More than Enough: Seeing Change as Blessing challenges each of us to reflect on our own life and recognize that we have always had enough of what we need for happiness. The author uses both wisdom and wit to explore how God accompanies us through every change and uses them to bless our life’s journey.

Martha has spent her life as a Sister of Charity-Halifax. As a former English professor, author of scholarly tracts, long-time advocate and educator for women and refugees, she has spent much of her life reflecting on the changes that have shaped her seventy years as a religious.