Get the HECK Out of Our Way!

EXAMPLES OF GOVERNMENT REGULATIONS THAT ARE ERODING OUR FREEDOMS, HOLDING BACK THE ECONOMY, AND COSTING US MONEY AND WHAT WE CAN DO ABOUT IT 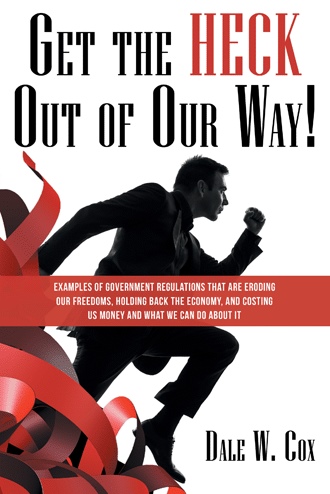 Should it really be this difficult to run a business in the United States of America? Regulations have become so numerous and extreme that it can be easy to forget what your business actually is and you start to think that complying with regulations is the business. Almost as an afterthought, there is the realization that there are customers and a product or service for sale.

I fell into this trap with my very first business venture and found myself thinking how mature and impressive I was, running this business. Then I realized I was spending most of my time doing things that had nothing to do with what supplied a product and fulfilled a consumer need but what law and/or regulations required. It was “busyness,” not “business.”

From my own experience and continued education, I have since come to realize that the regulatory environment we live in is holding back our economy, reducing our freedoms in the process, and contributing to inflation. If the government would get the heck out of the way, I believe many of the problems with the economy and our society would be greatly reduced or even disappear.

As the miracle of the Constitution originally intended, in order of decreasing influence in our everyday lives should be local, state, and then the federal government. The federal government had very limited powers. Most were reserved for the state and even more for the people themselves. This arrangement allows for local flair, while primarily the state governments make sure constitutional freedoms are maintained throughout their state. The federal government militarily defends the entire country and, in a very restricted fashion, oversees matters among states, intervening and regulating only in very specific and limited ways. Laws that were written to affect the entire country were to be few and far between, easily understood, known, and vetted publicly before being passed.

This remained the case for many years, allowing the United States of America to become unique in the world and to rise to prominence in historically record time. It was a place where immigrants could come, start with nothing, and become as successful as they wanted to be, all by the sweat of their own brow. And they gladly worked extreme hours to become successful. They enjoyed it. They were thriving, failing, and thriving again because the fruits of their labors were theirs to enjoy. There was very little holding anyone back who had an idea and wanted to run with it.

However, there was a turning point during the Great Depression. Since then, steadily and with increasing speed, the power base has shifted to the federal level. As a result, we now live in a country where the fruits of hard labor are forcibly taken and used for any number of things, many of which we would never choose to spend our money on. One of the largest federal expenditures is taking money from those who earn it and giving it to those who do not. This is a long way from what made the United States a shining light.

What is worse, the regulation industry, because that is what is has become, has grown exponentially since the Great Depression. Today we are becoming more and more enslaved by government and the wishes of those who would be our masters. Those are strong words, but in many respects, it is true. From my own personal experience, if the government would get out of our way, there is no limit to where we as a people could take our country and ourselves.

There must be change to the current environment for that to happen. It is within our power to get back to what government was constitutionally intended to do, to protect our freedoms and our liberties and not much else.

We need to return to the basic beliefs that we are responsible for our decisions, regardless of our circumstances, and must take ownership of them. It is up to us to figure out how to get to where we want to be. We have unalienable rights, among them life, liberty, and the pursuit of happiness, which are God-given and cannot be taken away. We have, and are trying to preserve, the freedom and right to do and obtain what we will, not the right to have things provided for us.

It is much easier to blame others for our failures. It is seductive, and it is dangerous. Some would use this seduction for their own purposes. When people become convinced that their troubles are due to others, terrible things can happen, especially when enough believe it. There are examples throughout history, including violent ones. We even see it today, in riots at college campuses and in towns and cities.

We need to teach that it is up to us to determine why we made poor choices so we can learn from our mistakes and move forward, bettering our communities and ourselves.   The knowledge that we are all responsible for our own lives and actions is crucial to avoid being trapped by others who would otherwise use us for their purposes.

I am convinced that, as people become aware of how they have been misled and how much more joyful life can be when living truly free, they will be motivated to be agents of change. We can all then become instruments to help educate our neighbors. The joys of living a self-reliant and responsible life are tremendous and unfortunately unknown to many Americans. They can be taught, however, and realize those rewards, if we take the time to love and teach them. The rewards of action are great, and the consequences of inaction are disastrous. Keep going. Never give up hope. I am excited to see what the people of this exceptional country can do when the regulatory roadblocks and restraining bands are removed. Let’s get them the heck out of our way, and show what we are made of! Let the reeducation begin!

Government regulations are increasingly holding back economic development, inflating the prices of most consumer goods, and reducing our freedoms.

Dale W. Cox, and his wife, LeAnne, know that firsthand as they have operated businesses of various types throughout the years.

What they’ve found is rules and regulations that constantly change and get more complicated, which hurts their businesses, their family, and their customers. In this book, Cox gives a detailed account of how these regulations make it more expensive to do business, boost inflation, discourage innovation, curb economic growth, and reduce personal and business freedom.

The examples of how regulations affect us from a cost and choice standpoint are illustrations that everyone can relate to, including buying a gallon of milk or a car.

Cox’s goal is to educate as many people as he can so we can move forward as a nation to restore freedom by supporting elected officials and others willing to do something about it.

It’s time to demand that we keep the fruits of our labor, which starts with telling meddling regulators to Get the Heck Out of Our Way!

Dale W. Cox earned a bachelor of science and master of science in food science at Brigham Young University. He has worked more than twenty-three years in the food industry, primarily in new product development and process improvement. With his wife, LeAnne, and others, he has run several businesses, including various real estate investment ventures, a mobile home park, and land development. He lives with his wife and their three children in North Carolina.