The Novel of St. Patrick and Ireland 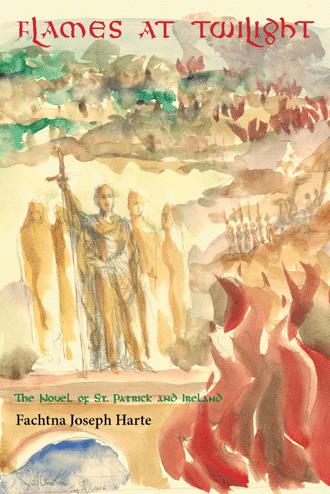 Pátraic was now keenly aware of the growing snake population in the west of Éireann and especially in Máigheo.  In his heart he grieved for the little boy who was lost because of the venomous bite of a snake.  He had heard the complaints of so many people who wished that something could be done to rid the entire island of the treacherously dangerous reptiles.  His new Christian converts had great belief in his relationship with the Blessed Trinity.  He began to pray constantly about the problem, to the extent that his soul was totally captivated with the dilemma.

One evening, having contemplated the goodness of God and the graces He had brought to his life, again placing his quandary in the hands of God, he retired for the night.  In many ways for Pátraic it was a night of wonderment with a dream that he believed was a message from on high.  In the dream he was standing on the bluff by the oceanside.  Reptiles of all descriptions surrounded him.  They were but a short distance away and he was unnerved by their massive numbers, endangering his life.  Snakes of every kind seemed to be slithering around him threateningly.  In his dream he turned to God, asking Him to free him.  Suddenly, at the raising of his hand in a gesture of 'STOP' all the snakes crawled with alacrity over the bluff and fell to the saltwater below where they drowned.  All other vicious reptiles in his dream disappeared.  Pátraic awoke with a start.  His heart was throbbing.  He had been through a nightmare.  He lay on his pillow with prayers on his lips.  He began to wonder if perhaps this was a communication from God.  He pondered and prayed.

"Could this be true?" he thought to himself.  "Might it be possible that, instead of a nightmare, this was a message from the Divine Persons?"

He recollected that his mind had recently been engulfed by thoughts of snakes and the calamities they were causing.  He had many followers beseeching his intercession with God, some even suggesting that through Divine help Pátraic himself would have the ability to rid the neighborhood of this plague.  For a number of days Pátraic prayed and prayed over this conundrum.  Then, one day, he watched a snake crawling up a tree.  Instantaneously he decided that, yes, he could and he would do something with God's help.  He told his companion priests he was about to visit his Christians on the north shore of Máigheo, a journey that would take them as far away as possibly the shores of Oileán Achla , further down on the west coast.  Pátraic remained silent that somewhere along the way he intended to perform a ceremony with the intent of ridding Éireann of snakes, once and for all.

It is July 384 when Roman officer, Calpurnius Potitus, receives a script from the emperor of Rome that he must take one hundred men with him to Britannia to reinforce the Roman army and protect the population from hostile marauders, especially the Celts from Hibernia who frequently invade the coastlands to murder and capture citizens. After a stunned Calpurnius reluctantly notifies his wife and teenage son, Succat, of the impending upheaval in their lives, he gathers his men and begins a dangerous journey into Britannia where uncertainty awaits.

A year after their arrival, all seems surprisingly well until their world comes crashing down without warning. After the Celts invade, capture Succat, and transport him to Ireland to become a slave, Calpurnius’s son sets out on a valiant quest to survive that eventually leads him to a monastery on the island of Saint-Honorat. As Succat leaves his old live behind, the abbot assigns him a new name. While Pátraic becomes a man of God committed entirely to the will of the Most Holy Trinity, he rises up to accept his destiny to bring Christianity to the Emerald Isle.

Flames at Twilight shares a fascinating tale that celebrates the remarkable journey and life of Saint Patrick.

Fachtna Joseph Harte was born in County Mayo, Ireland. Prior to his ordination as a Catholic priest, he was educated as a national teacher. He eventually immigrated from Ireland to the United States where he served in Yakima, Washington, and Orlando, Florida, earned two degrees, and taught in secondary schools. Now retired from active ministry, Father Harte lives in Orlando, Florida. This is his second book.