My Medical-Legal Back Pages

A Physician’s Journey Through a Marital, Medical and Legal Maelstrom 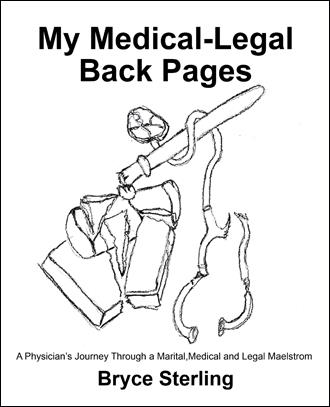 This financial adviser then clued me in on Mindy’s medical school and nursing school debt for which I should have received credit, but nowhere in my attorneys’ work product/records, depositions or Skyler’s half filled “Scorecard” had this had been taken into account. All numbers were all pre-tax. And of course, this financial planner was astonished that I had been paying Mindy $4,500 in support payments plus 100% of the child support while giving her exclusive use of the paid for marital residence with all debts, even the car payments and her premarital medical school loans already paid off. “She's a doctor, she isn't entitled to any support! Not even temporary support. How did she get that? Didn’t you get a second opinion?” I told her Skyler was the second opinion. I explained that during the divorce, after seeing my ex-wife running around, not working, having everything provided for her while she sat on her medical degree, the word got around and back to me, no less than from my children’s pediatrician: “Who in the hell is your lawyer Ken? Why isn’t your ex having to work while you are stuck having to work and pay her alimony?” This had prompted me to get a second opinion from Elaine Skyler.

Sensing now that this case was a disaster, she asked me if any provision had been made for this medical malpractice case and I said no. She then said “Oh, Dr. Sterling, I wish I had been able to talk to you before you settled. Your ex-wife has wiped you out! Here she is talking about goodwill on your practice and this medical malpractice suit is going to cost you more than your policy limits of just $200,000. Your practice may end up not being worth anything, and your lawyers made no allowance for this in the settlement? Didn’t they even discuss your malpractice liability limits?”

“Nope.” I fumed. I later realized that the lawyers hadn’t even made any provision for the impact the future Medical Board’s suspension would have on my career and future earnings potential.

As a boy grows up the child of two unemotional doctors, he learns some of his work ethic and sense of duty from his beloved nanny. While he transforms from the toughest boy in his class into the runt and eventually into an academic and athletic success, the young man has no idea that many years later, his medical career will suddenly end, mainly because of one tumultuous event.

In a hard-hitting narrative, Bryce Sterling details how his storybook life as a young physician slowly spiraled into a nightmare after he became embroiled in battles with his ex-wife, his lawyers, medical boards, courts, and colleagues. After sharing observations of the legal system, Sterling offers a glimpse into his background as he entered the medical field and then reveals the treachery and pitfalls that unfolded after he was sued for medical malpractice. As he details how he struggled to continue his shattered career until its bitter, premature end, Sterling shines a light on the inner-workings of a legal system he claims purportedly leaves doctors with a limited defense against the medical board.

My Back Pages is the true story of a physician’s journey before, during, and after his life and career were forever thrown into chaos.

Bryce Sterling is a board-certified orthopedic surgeon with a diverse background that includes a master’s degree in physiology, a certification in scuba diving, and a private pilot’s license. He is also a world traveler, ham radio extra operator, reef aquarium enthusiast, rock and jazz hobby drummer, and former collegiate all-conference wrestler.