A mercenary and his dogs 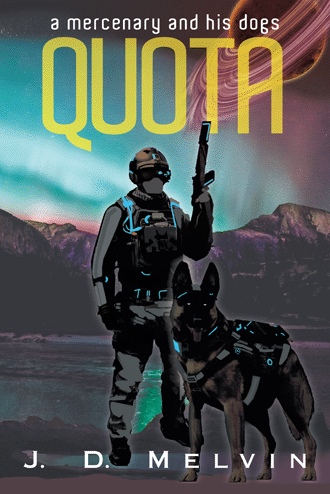 I had to protect my dogs but I felt the initiative slowly slipping away. At this point I was just reacting to the coming threat, not acting offensively. But I had to maintain my nerve and let them come to me. It was high-risk: The complex I was now hiding in could end up being my tomb, especially if there were a number of them out there. I decided to meet them at an entrance first and then move backwards and fight them back into the complex by picking them off one-by-one.

I lowered the cargo bay ramp. I would cover the ramp entrance from the inside and bound back into the complex as the fight progressed. As the ramp hit the ground outside, sun and dust filled the air inside the bay. The defensive laser cannon in the ceiling remained in a slouch, pointing lifelessly toward the floor. I took cover behind a nearby workstation and waited.

A sudden blast threw me to the floor. The intense light energy produced by the perimeter stun grenade that had been thrown blinded me and the resulting low-pressure wave designed in its punch produced an immediate and intense nausea. I had double vision from both the light and low-pressure effects. I could no longer hold my position as intense waves of nausea enveloped me as I bent over to vomit.

As I did I could hear the thumping footfalls of an up-armored fighting suit approaching from the outside. I forced myself up from the floor, using the workstation as a crutch. I looked around for my carbine but my double vision made it almost impossible to see past an arms length away. I was about to puke again when my unsteady hands found the grip of the ZG Gun that I had left on top of the workstation earlier. The heavy clomping of the fighting suit was now coming up the ramp. I crouched behind the workstation for cover as I let it come forward.

The armored suits right arm suddenly bloomed outwards into a blast of energized light as the GS-3 Gatling Hand Laser mounted there came to life. It sprayed its laser fire along the far wall, hoping to get my fire in return, thereby exposing my position for a better aim. When it didn't get the desired response it walked cautiously up the ramp and walked a few steps into the cargo bay.

As soon as it stopped to visually search the area I ordered #3 back into her stall at a run. As she ran across the cargo bay floor the suit swiveled toward her to take a shot. I focused the ZG gun on the heavy ballast bag that was stored on the upper shelf above my attacker, pulled the trigger and pulled the bag toward me. Two-tons of lead-based ballast crashed directly down on top of the suits helmet and pounded the body onto the cargo bay floor.

I ran over to the now prone fighting suit and blasted away at the helmet with my pistol. It wouldn't penetrate but it shot out the latches that held the helmet onto the suits torso. I kicked the helmet off and exposed my attackers face. He was in obvious pain. I screamed at him to tell me who sent him and why and how many were left out there. He replied in the same manner that I would and that was with nothing. The bulky armored suit underneath me and the heavy ballast bag were beginning to move as the suits occupant tried to roll over and free himself.

It is dire times for mankind. Population growth and the pollution of our environment was just the start. There seemed to be little chance for our continued survival until a new mineral called The Resource is discovered that could provide us with a new future. But we’re not alone. An alien race has also discovered the value of The Resource.

The Conglomerate is now Earth’s only remaining corporation. To control The Resource, they now hire mercenaries to protect against any threat that might hinder the Conglomerate’s mining process.

Our hero, now a mercenary and a recently wounded and discharged military veteran, is hired on with the mission of protecting The Resource against outside invaders. But the Conglomerate has a secret and dark agenda.

Eventually our hero has only a few unlikely partners to help him fight the battle for his own survival. And they are dogs.

J. D. Melvin has over two decades of experience as a member of the U.S. Army Special Forces and the United States Special Operations Command. While training with an USMC Military Working Dog Team in preparation for a combat deployment to Iraq, J.D. quickly learned of the dedication and sacrifice displayed by the human handlers and the selfless service of their working dogs. This was the inspiration for his novel.

After his military career, J.D. has served as a law enforcement officer, EMT and military paramedic instructor. He now lives in the mountains of Colorado with his wife Kim and their dog Ronin.