The Lost Diary of Marilyn Monroe 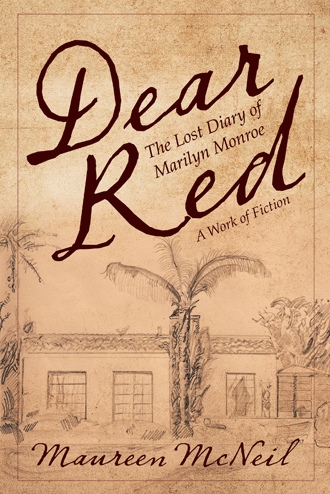 FEBRUARY 16, 1962
Dear Red,
Arthur married Inge Morath today. I should be happy, right? But I think of them enjoying the Connecticut farm and it depresses me. They flirted on the set as we shot Misfits. Meanwhile he kept rewriting the script using my angry words. I felt so used and exposed. We knew our marriage was over, but why did the pain have to be so public? Only I got blamed for problems on the set—the dumb blond is an easy scapegoat.
Clark Gable was a sweetie, letting me cry on his shoulder at Bucket of Blood Saloon. I was so sad when he died a few months later, his wife pregnant. Of course people blamed me for his death! He was the only cast member who never complained when I blew a line. When I was little, Mother gave me a photograph of Clark Gable—she told me he was the spitting image of my father.
Come to think of it, I also got blamed on the set of Let’s Make Love. Yves Montand told gossip columnist Hedda Hopper that I wooed him, when Montand was the one who chased after Cukor and me, playing us off each other. We got along better before Montand came along. I never bothered to correct his lie. Montand got the American press he wanted, making me the slut. Like Arthur, who let the press babble on, never mentioning that he was the one to have an affair. I was loyal to Arthur. And I’ve never been a tattletale.
Doris Day sings “Que Sera Sera” bullshit on the radio all day long.
I’m drawing sketches, looking through magazines, trying to decide what kind of hairdo I want for the president’s birthday. My hair has been a different blonde in each of my films: moonlight, golden ash, silver ash, white ash, amber, smoky blonde, honey white, topaz white, unbleached, platinum white, and now pillowcase.
FEBRUARY 17, 1962
Dear Red,
I woke up to the same bad dream—smoke seeps from beneath the closet door, and my muscles spasm up and down my left side. I called Inez right away, afraid something happened to Mother. She visited this week and assured me that Mother is fine. I’ve got a trust fund for Mother’s care at the Rockhaven Sanitarium. It should be enough if she lives to be a hundred. But after talking to Inez, my voice was still shaky, and I called Dr. E. He came over and gave me a shot to calm me down. Even now, hours later, I am still trembling. I feel like the wild horses in Misfits about to be turned into dog food.
FEBRUARY 18, 1962
Dear Red,
It’s 3:21. I soaked in the bath, took pills, and still can’t sleep. This afternoon, we were on Santa Monica Boulevard, a few blocks from my house. I was putting on lipstick and looking in the mirror and saw Giancana in the passenger seat of the car behind us. A woman was driving. I pointed him out to Mrs. Murray. If you ever see him again, tell me. She asked who he was. I just said, “A friend of a friend.”
Gandhi called his autobiography experiments with truth. Reading about his life as it evolved is like reincarnation. I think he started out as an accountant! Truth is a kind of balance you have to practice, like walking. A continual adjustment is necessary to come up with the truth.
FEBRUARY 19, 1962
Dear Red,
The Rat Pack doesn’t consider my belt full of notches equal to theirs, but Frankie can’t get rid of his feelings for me. And he can’t make me disappear like all the other girls. That’s why they call me an institution, like his mother, Dolly. She was godmother of Hoboken, saving neighbors down on their luck, including a Jewish girl in need of surgery. Dolly told me that she always wanted a little girl, but Frankie was her only kid.
I woke up with blood all over the bed like something violent happened. I hate that women have to put up with feeling bloated, the cramps, the painkillers, and the mess. Being born a man might have been better for a lot of reasons, but then I should accept all the parts of womanhood, right?
Dad and I don’t agree on everything. I mean, there is nearly a forty-year age difference. He thinks Adelle Davis is bullshit. She says that every day you do one of two things: you build a healthy body, or you produce disease. I’d rather call it dis-ease. I think she speaks the truth, but I don’t argue with him. Fathers are of a different generation, and truth seems to change with time. Old movies have to be remade. Just look at the Adam and Eve story—that old script needs a major rewrite!
FEBRUARY 20, 1962
Dear Red,
I’ve always adopted families. Lately it’s Dr. G’s. I like his kids and his Spanish-style house. But I have a house of my own now. I don’t need his. I think all he needs is one big fat patient—Marilyn Monroe—for his livelihood. He takes so much of my time—ninety minutes every morning. And since I moved, he stops by my house for no reason. Maybe my upcoming trip to Mexico will break his bad habit.
To-Do List
Ask Dr. G how to get a new fantasy (he needs it)
FEBRUARY 21, 1962
Dear Red,
Astronaut John Glenn circled the earth three times today, and the whole world stopped. Isn’t that something? Seven thousand people watched on a screen in Grand Central Station. The capsule dropped into the ocean and was picked up by a destroyer. That is fucking dramatic! Dreamboat greeted Glenn at Cape Canaveral and invited him to the White House to hear what it was like to float in space. I look forward to the picture of earth whispered in my ear one day soon.

It is 1962 and America’s greatest sex symbol is ahead of her time. Within the pages of a secret diary she names Red, Marilyn Monroe scribbles her hopes, dreams, and fears, inspired by her aspiration to one day motivate a young person to become something bigger than they ever imagined.

Marilyn begins on January 1 by divulging she has officially given up eating mammals. As she pens her feelings and experiences for the next seven months, the thirty-six-year-old actress shares impressions of dogs and bike rides, memories of married life with DiMaggio and Miller, and reveries of a future with Dreamboat. As she attempts to distinguish friends from enemies while preparing for her last film, Marilyn details her rehearsals for the Happy Birthday performance for JFK’s Madison Square Garden celebration, worries about her mother’s health, and battles for a million-dollar deal with Twentieth Century Fox. But as Marilyn makes plans to free herself from those she cannot trust, she never imagines what will happen next.

Dear Red shares the fictionalized diary of the brilliantly funny and hardworking artist, Marilyn Monroe, as she lives again, if only to reveal an emotional truth about her death.

Maureen McNeil is an artist, educator, and writer who works within nonprofit organizations using the arts for social change. Her poetry and short stories have appeared in numerous journals, and a collection about Brooklyn, Red Hook Stories, was published in 2008. Maureen divides her time between homes in New York City and Hudson, New York.