A Pioneer Tale of the Ohio Valley 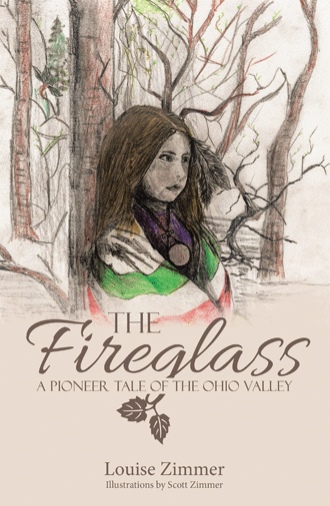 He moved carefully along the river bank, keeping well within the shelter of the brush growing there. Suddenly, a familiar scent reached his nostrils. He felt his head snap back as if he had been struck. The stench killed his appetite on the spot and took him back in time – back, back, back to the banks of remembered rivers, back to the scene of killing fields.

It was the unmistakable smell of blood.

He froze motionless for several minutes, straining to hear, using every sense, every instinct to interpret the sinister information brought to him on the wind. There was no sound except that wind and the slap-slap-slap of the water thrust against the shore. Instinctively he checked the knife at his belt, and crept forward, rifle in hand.  Impossible to pinpoint movement in the tumult of the approaching storm, he inched his way up to the edge of the river bank – steep at that point – and looked down.

It had been a small flatboat. For a time, perhaps since leaving Fort Pitt, it had been the home of a family - a man, a woman, and two half-grown children. Their bodies were scattered among the wreckage of their boat. Peter might have thought they were the river’s victims, thrust ashore and smashed to bits by the angry water, but these bodies were naked. They were scalped and mutilated. The man’s body was half in, half out of the water – the river would soon claim him and he would be just more debris swirling down toward the mightiest of rivers-the Father of Waters.

No help was needed here. Peter stepped backward – carefully, carefully preparing to ease into the brush line, to blend and vanish into the forest. And then he sensed - rather than saw – movement. It was the woman’s body. Could it be she still lived in spite of those vicious injuries? Still cautious, looking about him, Peter moved toward her. The fringe of hair left on the back of her head was corn-silk yellow, her naked body showed white and fair between streaks of blood.

And then he saw the source of movement. It was an infant. A tiny blood soaked, mud covered creature – hardly recognizable as human - more than half concealed by its mother’s body. He grasped the woman’s white bony shoulder and turned her slightly stiffened corpse to reach the child. It was not scalped. In fact, it was still wrapped in what appeared to be a small muddy blanket.

Peter had never touched a baby before. How to grasp the slippery little body? And shouldn’t it be making some sort of noise? Two possibilities galvanized Peter into action: life might well be ebbing away from this pitiful creature – or – the second possibility even more alarming, it might rally and raise a cry to bring the warriors back down upon them. Quickly, he found a mud-slicked little arm and pulled the baby up, away from the mother’s body. Still no sound. Clutching the child against his chest, rifle in his other hand, Peter moved swiftly back from the river bank and the scene of carnage. In the relative safety of the cover of the bushes, he examined his foundling. The mud and blood soaked blanket was worthless. He pulled it away, and used the corner of his hunting shirt to wipe the mud from the baby’s face, clearing her nostrils. Little arms flailing about, the child struggled with its breath.

At that moment, the storm broke. Great stabs of lightening ripped the sky and the rain came down in sheets. The baby almost leaped from his arms, gasping as the water struck her body.  An astonishing and piercing howl joined the pandemonium of the wind and rain and thunder that surrounded them. Peter was appalled. How could so small a being make such a noise? Somehow, she must be silenced, or she would bring certain death down upon them as surely as that which had destroyed her family.

She must be silenced, and she must be hidden. And he – Peter – must leave this place with all possible speed. How to reconcile these desperate necessities? She wasn’t much larger than a few cakes of bread, or a handful of May apples – items Peter had carried in his hunting shirt for many miles.  He tucked the wet, cold and wailing little body into his shirt front, folding the garment tightly around her, binding her to him. He fastened his belt tighter to hold his squirming burden in place. And then he ran.

Peter Shamokin is a young man who comes of age amid neglect and sorrow in the high-risk environment of the frontier of the New World in the late eighteenth century. He drifts into a life as a lone hunter and trapper, sharing supplies with a succession of men who are as loveless and homeless as he is.

Despite the hard existence, Peter finds some solace and contentment. He possesses a fireglass, a gift given to him by a trader for a favor, which serves as both a magnifying glass and a fire starter. Through hardships and injuries, the fireglass serves as a good luck charm that carries him through to safety. Then, one day, Peter rescues a baby from among the remains of her murdered family in the wreckage of a flatboat. He names her Dinah and resolves to take care of her, and from that moment on, his life forever changes. Although history is being made in the Ohio Valley, Peter manages to slip unscathed through its pages—until those events touch Dinah.

In this novel, a hunter living in the Ohio Valley in the 1700s has two treasures that give his life purpose: the fireglass and the baby he rescues and raises as his own.

Louise Zimmer was a well-known historian, storyteller, and author of the Ohio Valley. She lived in Marietta, Ohio where she worked at the Washington County Public Library as reference librarian and head of the History and Genealogy Department for eighteen years before retiring in 1992. She was the author of several books, a newspaper column, and a long-running radio series. She died in 2015, leaving a legacy of historical knowledge told through passionate storytelling.