From Opposite Sides of the Periscope

The Trail Is On 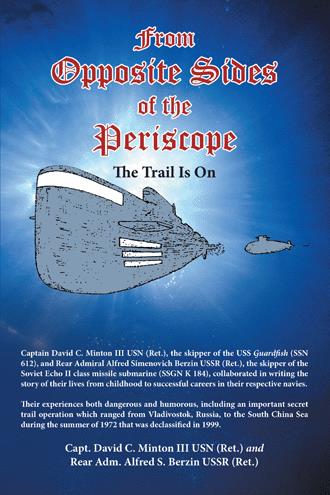 The spring of 1972 was a very perilous time. For not only was war raging in Indochina, a second war, a Cold War, raged in secret as well. The question, without an answer, was would the bombing and mining campaigns of the Hanoi and Haiphong harbors, announced by President Nixon on May 9, 1972 bring the two super powers into a violent collision? Would the presence of nuclear submarines, both Soviet and U.S., turn the Cold War hot?

It was during several weeks in 1972 that one lone nuclear submarine prevented the tactical morass of the Vietnam War from engulfing the strategic success of our Cold War containment. This submarine, USS Guardfish (SSN612) commanded by Commander David C. Minton III, was the only source of hard intelligence available to our government and provided real time tactical information on the Soviet submarine threat to our carrier forces which were off Vietnam. Our carriers were deploying thousands of sorties into North and South Vietnam. Under this tremendous operational burden they were especially vulnerable to attack.

With a war raging in Indochina and a Cold War raging in secret, the spring of 1972 was a perilous time.

The question everyone wanted an answer to was whether the bombing and mining campaigns of the Hanoi and Haiphong harbors, announced by President Nixon on May 8, would cause the Soviet Union and the United States of America to collide.
During several weeks in 1972, one lone nuclear submarine prevented the tactical morass of the Vietnam War from turning the Cold War hot. The submarine, USS Guardfish (SSN612) commanded by Cmdr. David C. Minton III, secretly followed a Soviet nuclear guided missile submarine K 184 commanded by Capt. First Rank Alfred S. Berzin, from Vladivostok to the South China Sea, in the wake of the mining of the Haiphong and Hanoi harbors, providing real-time information on the Soviet submarine threat.

Follow two young commanders who led different lives but had surprisingly similar careers until they converged in the waters off of Vladivostok.

Capt. David C. Minton III USN (Ret.) was commanding officer of the USS Guardfish (SSN 612) in 1972 when the Soviet Navy sortied five nuclear missile submarines to the South China Sea in response to the United States’ mining of North Vietnamese ports. Minton trailed a Soviet nuclear guided missile submarine, K 184, for twenty-eight days and 6,100 nautical miles.
Years later he was able to contact the commanding officer of the Soviet submarine, Rear Adm. Alfred S. Berzin USSR (Ret.), and they were able to co-author this book.