The Round of Your Life

A Book on Golf and Life 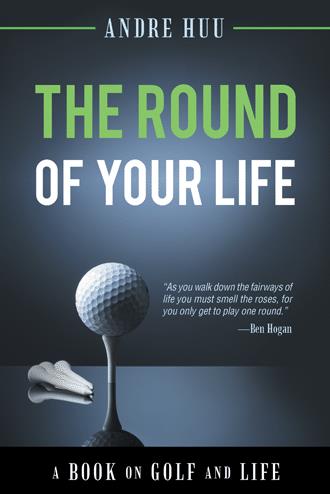 GOLF: THE ROUND OF YOUR LIFE

“As you walk down the fairways of life you must smell the roses, for you only get to play one round.” –Ben Hogan

As the great Ben Hogan once said, what if your life was like a round of golf? What would that round be like? What might the current unfinished “scorecard” of your life look like?

If the average life expectancy in the U.S. is approximately close to 80 years of age, then imagine splitting the first forty years of your life into a “Front Nine”, and the remaining forty plus years of your life into a “Back Nine”. Using this metaphor then, which “hole” of golf would you currently be playing on now? What kind of round have you had so far? And most importantly, how are you going to finish out this round, the one and only precious one that’s been given to you in this one life that you have to live?

The curious quest to search for answers to these hypothetical questions and more is what eventually led me to the fundamental concepts behind this book. The inspiration to actually write a book on the subject first came about after these very exact thoughts hit me as I was making the turn one day during a routine round of golf with my usual golfing buddies in Texas. I’m certainly not the first person to have experienced such profound thoughts on the subject of golf and life, especially while playing in the middle of a round, but as I looked around to my three other partners on that one hot sunny day in Texas, I wondered too about how their round had been playing out, and what their scorecard might have looked like up to that point in their lives…

Has their round been filled with more bogeys or birdies or pars? How many lucky chip-ins or bunker and other shots out of the hazards have they had to take in life? How many times have they found themselves “in the woods” and had to punch out just to get back onto the fairways of life? How many short “gimme” putts have they missed on their greens? And regardless of their score, were they still able to take in the moment and enjoy their round, each and every stroke of every hole, or were they too frustrated by the constant daily stresses and “ups and downs” of everyday life to really enjoy the round?

As I approached the next tee box and my thoughts quickly returned back to the matter of playing golf that day, I tried to recall a quote that would make it easier for me to keep things in proper perspective as I prepared to take a swing with my driver:

“Stop stressing over hitting the perfect shot every time Andre! Just remember that a bad day on the golf course is better than a good day at work ANY day!” It was a quote that I had heard probably dozens of times before, and I was hoping that it would once again help relieve me of any anxiety and pressure that I had been placing on myself that day. This bigger picture perspective did indeed help me play better on the next several holes, but just as I was starting to get fully warmed up and put a string of good holes together, I found myself already on the eighteenth and final tee box of the day. My round was almost over!

Geez, where did all the time go?! It seems like I was just getting warmed up for my round, and now it is nearly over already! If only I could just play another eighteen, I remember thinking to myself.

And that’s when the thought hit me…how many times might the average golfer have said that to himself at the end of a round? Or applying my earlier metaphor of life to golf, how many times have people on their death bed wished that if only they could play another round, and have a second lease on life, or at least get a do-over of their first one?

It’s been said that most people regret more of the things that they didn’t do rather than the things that they did do in life. Applying that logic to golf, perhaps what we should be doing more often then, is focus more on the enjoyment of playing golf itself, and on being in the great outdoors in the company of good friends, rather than worrying so much about our overall performance. After all, it is those memories of spending the round with our friends and exchanging playful banter back and forth amongst each other that we will ultimately remember most, not what score we shot that day.

Thus, with the enlightened mindset of worrying less about our scorecard and more on getting the most enjoyment and happiness we can out of our round, perhaps most of us should have “went for it” in two shots on those reachable Par Fives instead of laying it up safely just short of the hazard. Sure, the odds of us landing that little white ball onto the green in two might be less for some than others, especially if you’re a mid to high handicapper like me, but one thing is absolutely certain: you never know unless you try.

As the great basketball legend Michael Jordan once said, “You always miss 100% of the shots you don’t take.” I’ve personally found that even when I don’t make it onto the green in two, I was still able to gain much more satisfaction from having “gone for it” and falling just short of my goal, over the feeling of relief I got from avoiding a big number on that particular hole by having played it safe. Of course, I don’t always aimlessly take the uncalculated risk, but I do try more often than not. And for those times when I do succeed, the feeling of reward I got on even half of those attempts were all worth it to me.

It was this same line of intriguing thought that would eventually lead me to view every round of golf I have played ever since quite differently. The thought occurred to me that every cliché and every inspirational quote that I had ever heard or read in my life could easily be applied to the game of golf. Every life lesson even. And as every golfer can attest to, there are a great number of life lessons that this beautiful game can teach every single one of us, if only we were receptive and open enough to learn it. And that is one of the humble aspirations that I have for this book.

My hope is that every person reading this, from the triple-digit beginning golfer to the more advanced scratch or low handicap player, and everyone in between, can take away a simple message that might forever change the way they view and take in every round of golf they play from here on out: Life is indeed very short, so why not play every round as if it was your last?

I’d like every golfer reading this to really pause and think about this for a brief moment: if this was indeed the very last round that you ever got to play in your life, why wouldn’t you go for it in two instead? I mean, what do you have to lose? Would you really still play it safe knowing that you were going to die tomorrow? In fact, how might that change your overall approach to all the other shots you take in your final round as well? I have a feeling that many of us would perhaps “go for it” more often and leave fewer putts just short of the hole if we all had this “nothing to lose” mental approach to our round.

The late, great Steve Jobs made a similar point along this very same line of thought in his famous commencement speech for Stanford University in 2005:

As the great Ben Hogan once said, what if your life was like a round of golf? What would that round be like? What might the unfinished “scorecard” of your life look like? The quest for answers to these hypothetical questions led author Andre Huu to the fundamental concepts behind his book, The Round of Your Life.

In his memoir, Huu likens his life to a game of golf, offering a scoring method to help him evaluate his experiences, responses, and lessons learned. Throughout this journey—from his birth in Vietnam to the present day—he shares his stories and the scores he has assigned himself for each hole he’s “played.” He invites you to apply his unique scoring method to come up with a scorecard for your own life.

Filled with life stories, insights, advice, and inspirational quotes, The Round of Your Life encourages you to worry less about the score of the game and focus more on getting the most enjoyment possible out of the rest of your round.

Andre Huu is a jack of many trades: physical therapist, entrepreneur, aspiring author, and artist. But mostly, he is a proud husband and father of three. He is also an unaccomplished, high-handicap golfer. Visit Huu online at www.golfroundofyourlife.com.