You’re Not the Boss of Me 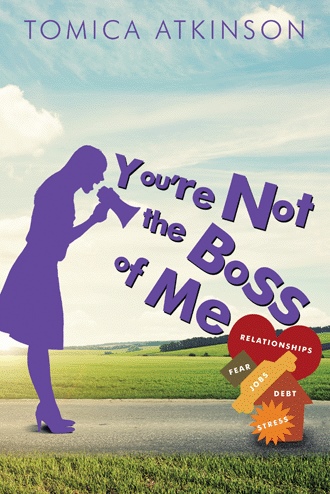 Just sitting thinking...I don’t want to work anymore.  I am so tired of working for someone else.  There are so many other things that I want to do instead of sitting in a cubicle all day frustrated.  I refused to hit a timeclock for the rest of my life living paycheck to paycheck.  There’s more to life than this.  Others may be okay with that, but I’m not.  I know people aren’t okay with this, I heard my friends, family, and co-workers talk about this every day.  The constant complaining about their work schedule, job duties, other co-workers, supervisor, salary, work environment……the list goes on and on.  We all feel overworked, unappreciated, and underpaid in our jobs.  Where was the loyalty and the concern of employee morale?  Why are some put in management positions to supervise and lead employees, but don’t have leadership skills?  Why are so many undeserving people getting promotions?  I’m doing all the right things and still being overlooked. When you throw in everything else going on in your personal life with family, finances, health and personal wellness this is just way too much to deal with. Something is very wrong with this picture.  Almost everyone I know is actively seeking and interviewing for other employment, but just hasn’t gotten an offer yet. On the other hand, I also know quite a few entrepreneurs.   have always wanted to start my own business. I should be my own boss.  Well, what’s stopping me?  Maybe fear. What if I fail at what I want to do?  What has the world we live in evolved to?  The rich get richer, the middle class stays broke, and the poor get poorer. Seems to be a tremendous gap in the mindset, a lack of education, and motivation of the three classes of individuals. We must do something to bridge the gaps. It’s ridiculous to live in a world that we allow this to be our norm.  We need to educate our communities and create opportunities for individuals to be self-sufficient. It’s possible.  Has anyone ever heard of Black Wall Street?  My God, every time I think about how it was all destroyed in the blink of an eye I get furious. Despite my emotions, the point is it existed. Why can’t we get that back? I can only imagine the world we could be living in if we bridged those gaps so our communities were thriving filled with different levels of prosperous and self-sufficient individuals not from a hand out, but from an opportunity. Not from any type of government programs, but from the fruits of your own vision, knowledge, power, and labor. Wisdom and vision that we can pass on from generation to generation. I know the bible says in Proverbs 29:18 KJV, “Where there is no vision the people perish.”  Because there is no vision these gaps continue to grow wider and wider. This world is setup for us to fail.  Why are we only teaching our children to get a college education to create thousands of dollars of debt and put limits on their lives by telling them to go get a job work for 30 years and retire.  It is so funny how people go to work and the manager tell you what to do all day long and you do it without hesitation for someone else.  Or you give 110% to a job, but won’t do it for yourself. I realized why we were programmed that way and it won’t end until we break the cycle.  So, what am I going to do?  I am going to use that hurt as motivation to change myself and to inspire others to change. I am going to break that cycle. I will be my own boss.  You are not my boss. I am my own boss. Just my thoughts.

But don’t just take my word for it. In my research, I found that 30% of the 150,000 full and part-time workers surveyed honestly enjoyed their jobs and their bosses.  But that is where the good news stops.  The other 70% of Americans surveyed in the 2013 Gallup poll either hated their jobs or were completely disengaged, and not even incentives and extras could remove them from the working man’s blues.  Of that 70%, a full 20% of the respondents are what Gallup classifies as “actively disengaged,” these people who quietly voice their frustrations and complaints amongst their co-workers and job hunt on their lunch breaks. The remaining 50% of US workers are labeled as “disengaged,” according to the report, meaning that while they show up for work, they are not “inspired by their managers.”  The article stated, many of the surveyed complained of “bosses from hell” who ignored talent and didn’t cultivate growth. But the implications of the report go much deeper. The report stated that the dissatisfaction, anger, and boredom felt by workers hurt the economy, which has been feeble since the Great Recession of 2008. According to the article, it also costs the US an estimated $450 billion to $550 billion per annum of lost productivity, stolen goods, and missed days of work .  Now, how is that for some honesty?

Why does it have to be like this?  Who can you blame for feeling like this? What do you do in this situation when you just feel stuck and all hope is lost?  Well, enough is enough no more complaining it is time to do something about the frustration!!! So, I will answer these questions for you. The simple answer is you cannot control the actions of anyone else. However, you can control your own actions and remove yourself from any situation especially a bad one. It is time to realize that no one else is your boss.  You are your own boss.  You control everything, the good, the bad, and the ugly. It’s all you!

You might be in that thirty percent of employees that a Gallup poll tells us truly enjoy their job and supervisor.

But more likely, you feel overworked, underappreciated, and underpaid. You may also wonder why so many undeserving people get promotions, why loyal employees get laid off or fired, and why you’re doing all the right things but still being overlooked.

Tomica Atkinson knows how you feel, because she once felt the same way. She changed her life by applying six simple strategies to become her own boss—stratagies she reveals in this book.

The tools and resources she shares will help you end whatever frustration and misery you’re facing on the job. You’ll learn how to channel those feelings into a determination to start your own business or change careers.

Discover a roadmap that leads to a new mindset, new results, and a new future with you at the wheel in You’re Not the Boss of Me.

Tomica Atkinson is the CEO and founder of Shanelle & Co. Boutique, LLC. and London Belle Business Solutions, LLC. She has more than twelve years of experience in accounting and business. Her burning desire to impact the lives of others as well as promote her own growth fuels her passion to serve, educate, and empower others to take a leap of faith toward their dreams.