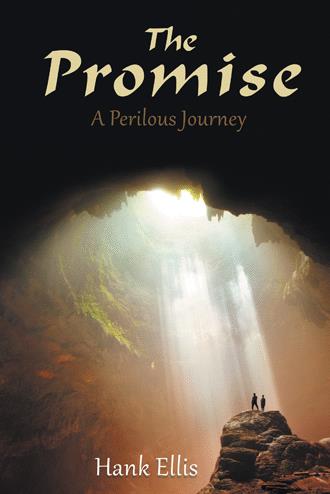 The two of them kept waiting for their eyes to adjust to the dark, but it never happened. More than fifteen minutes passed before they realized their situation wasn’t going to change. It was a clear lesson on what it meant to be blind. Their other senses began to compensate for their loss of sight. The hard surface of the rocks began to aggravate Dave’s back pain, and Peter’s wet clothes started chilling his body at a quick rate. To help overcome the pain and cold, Peter wiggled his body up against a fairly flat rock and sat piggyback around Dave’s back. The touch of their arms and hands was reassuring, comforting, and warm. All fear of embarrassment melted away as they held each other. They were simply two brothers in a very difficult place sharing their resources.
As they stared into the darkness, the boys heard strange sounds coming from the cavern and the water. They reassured one another by whispering that everything was okay. Whenever something moved toward them, they would start speaking out loud. As soon as they did, the noise would subside or move away. To be sure of their safety, the brothers ran their hands along the large boulders near their seat in search of something to throw. They sat in the same place for almost an hour. For a short time Dave fell asleep while Peter maintained a protective position. Peter thought about ways to overcome their predicament but kept coming up short. Never had he encountered such a strange problem. He didn’t know where he was or which way to go to reach light and a possible way out.
Before long, Peter started to drift off into tiny episodes of sleep. He fought it, but it was difficult. After five minutes of head bobbing, he started dreaming. At least he thought he was dreaming. In the pitch-black he wasn’t sure. He thought he could see flickering dots of light on the other side of the lake that were slowly spreading over the water. The tiny bits of light increased until he could see the shadowy outline of the cavern. This is crazy, he thought. I must be awake. “Dave, do you see this?” whispered Peter.
As Dave slowly opened his eyes, he was overcome by the spectacle. By now the light had grown by leaps and bounds. The little flickering light sources were thousands of lightning bugs. Dave could see the entire cavern, the rock walkway they were sitting on, and the entire lake. “I sure do. This is incredible. Look! I see some men on the other side of the lake, and they’re coming our way. Is this a dream?” asked Dave.
“If it is, we’re both in it, and it feels real,” said Peter. “I see the same men.”

Peter and David Wilson are two adventurous, adolescent brothers, who make a fantastic discovery in the nearby forest. One afternoon in late June, they stumble upon a huge mysterious cavern protected from the elements for centuries. Using dreams and deciphering riddles, they travel through underground passageways to meet the maker of their dreams. Through a series of strange and supernatural encounters, Peter and David must rely on resourcefulness, perseverance, and love to lead them to an opportunity they could never have imagined and make a decision that will change their lives forever.

Hank Ellis has been blessed with a beautiful and loving wife, two incredible sons, their remarkable wives, and some amazing grandchildren. Beginning in early childhood and continuing into retirement, nature has always been an important part of his life. From childhood fort building and camping to exploring in the forest and swimming in the small pond behind his rural home, he experienced nature first hand with family and friends. He spent two summers mountain and rock climbing, throughout the United States with two special cousins. He earned a bachelor of science degree and a master of science degree in natural resources and animal science from the University of Rhode Island and was supervisor of the Freshwater Wetland Protection Program for the State of Rhode Island for 25 years. As husband, father, and friend he loved camping with his wife, sons, and some special companions. His most recent exploration was scuba diving with his sons in Narragansett Bay, Rhode Island Sound, and Block Island Sound. This is his first book.