On the Origin of Dignity

Its Creation and Enhancement 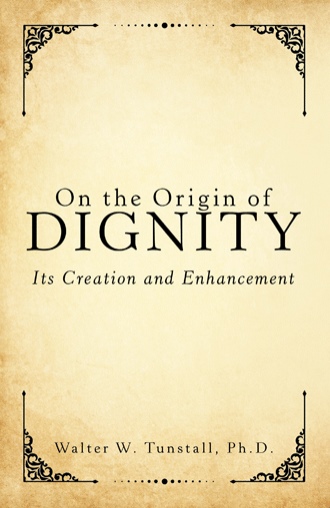 The position taken here regarding the conditions from which dignity/worth originate are generally in agreement with the position taken by symbolic interactionists: human existence is given, but itself has no meaning. From this viewpoint meaning becomes possible in relational situations in which influence and consequence follow from interaction. Meaning in this view is an emergent phenomenon. It comes into being as the process of interaction takes place. Meaning, therefore, is social in origin (Stern,75).

Some might argue that humans have worth, and hence dignity, because we are the originators of meaning. This is, of course, an important consideration, but it is not the principal aspect of the interactive process that will be focused on here. The genesis of worth is more intimately tied to the interactive process. Humans are not seen, in this formulation, as having worth because of something else: because of a relationship with God, because of our ability to think, or even because we are human. Worth is not seen as a derivative function of some other thing, condition, or circumstance. Instead, worth/dignity is seen as a constantly renewable and emergent phenomenon.    Worth/dignity takes place, emerges, from within the interdependent and intersubjective phenomenology of one human being interacting with another human being as validation or invalidation, and it always takes place whether we are aware of it or not, or whether we want it to or not. Worth/dignity is, thus, an interactive and emergent creation, a co-creation, and as such does not exist apart from interpersonal experience.

Worth is manifest through the act of objectifying or bringing into the experienced phenomenal world the perceptions (beliefs and emotions) of each individual engaged in the interaction. Through the process of validation individual phenomenology, our awareness of the contents of our consciousness, is taken from the personal, the subjective, and imaginary and is given an existence outside the differentiated consciousness associated with the self. Through the process of validation consciousness achieves authenticity; it becomes real.

In On the Origin of Dignity Dr. Tunstall presents a revolutionary, provocative and original theory that spells out how our dignity comes into being. This monumental work recounts dignity’s long existence as a concept, and its growth as a major theme within current international discourse, as it moves beyond dignity’s existence as a mere belief to explain how dignity becomes a living experienced dimension within each human being.

On the Origin of Dignity sheds new light on its topic by going beyond the conventional and mythic accounts of dignity’s origin to offer a detailed explanation of how, when, and where self-worth or dignity comes into being. The book describes dignity’s emergence within a universal psychological process as integral and elemental to human experience as breathing. It is not dependent upon social norms, tradition or religious and philosophical traditions to account for dignity’s origin. Instead, it offers a detailed explanation of dignity’s creation within day-to-day, moment-to-moment interpersonal experience.

On the Origin of Dignity asserts that human interaction is the co-creative nexus from which dignity emerges. It clarifies and provides a coherent and understandable account of why and how the underlying psychological process of validation unifies many of the customary and disputed meanings associated with the idea of dignity in centuries past. This original work appears at a time when a Zeitgeist exists that seems to have forgotten the importance of dignity in maintaining a civilized society. Dignity, as On the Origin of Dignity makes clear, may well be the essential ingredient in human striving that achieves stable civilizations locally and globally.

Walter W. Tunstall, Ph.D. earned B.S., M.S., and Ph.D. degrees from Virginia Commonwealth University. He taught at numerous colleges in Virginia and Washington State, and he worked with persons with chronic disabilities in both states. Dr. Tunstall is retired, lives in Olympia, Washington, and welcomes comments from readers at: WalterTunstall0656Comcast.net.