The Last Days in May 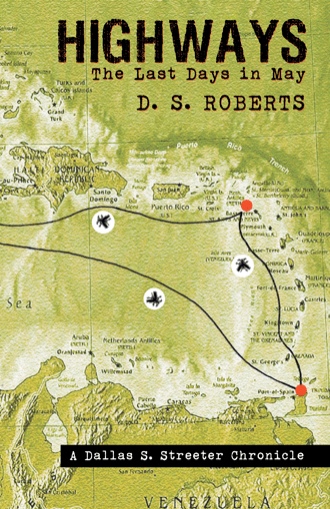 Highways Preview
Dallas walked over to the person sitting in the swing and heard a familiar voice, a voice he hadn't heard in almost a year. The voice clearly said, “Why hello Streeter! Been a while hasn't it?” Dallas wanted to puke! COX! Dallas crisply said in return, “Yeah been a while. What the Fuck are you doing on my island?” “Oh Streeter, no man is an island! You know that!” “That didn't answer my question COX!” “Oh, that? Well I just thought I'd stop by and talk.” “Talk?” Dallas said, incredulously. “You want to talk to me? You have no jurisdiction out here!” “What? Two old friends can't get together and talk out here?” “What two old friends?” Dallas asked. “You – Me – Us, WE aren't friends COX, you tried to screw me at the last minute, back when I gave you a serial killer named Skeets! Remember?” “Oh, that, well you were always one or two steps ahead of me Dallas, I had to make it look good, ya know, for the paperwork and all!” “Yeah I bet! COX,” Dallas shot back. “Listen COX, get to the point!” “OK Streeter, the point is that . . . You mean you didn't get my message I sent out here?” “No. What Message?” “Well Dallas, you probably don't know this, but our old friend Ernie Skeets – You remember him – Sycophant-Killer with a real hard-on for you by the way.” “Yeah! What about him, Cox?” “Well when his old partner Henry McCluskey talked him out of that sinking sailboat, well, he didn't secure him real well. And Ole Skeets slipped his cuffs. We think that he had his own key hidden, and Henry didn't search him except for weapons, and with all that Cocaine floating in the water and the boat sinking . . .” “SINKING? Cox, it was in 4 feet of water. Jeez!” Dallas voiced loudly. “Yeah, yeah, we know that. But everyone else thought different. “Therefore?” Dallas asked again. “Well Skeets slipped his cuffs and jumped out of the Black Hawk. “YOU have ta be shitting me COX!” “Nope, got clean away.” “C'mon Cox, he was shot twice and tripping his ass off on mushroom juice!” “Oh that's what the stuff was!” Cox interjected. “Man, he thought we were aliens and taking him to a mother ship.” “BUT HE STILL ESCAPED? “Yeah, poor old Henry, his old partner lost his pension behind this one.” “Ya know something Cox? You guys are for real scumbags.” “No Shit! Well that's not why I'm here.” “Then why are you here?” “Got a beer?” “No,” Dallas said, holding a case under his arm. He tore open the case, and gave one to Cox, too. “Thank you.” “Yeah, no prob.” Dallas said. “So what's the deal?”
Cox began telling Dallas about how rogue agent Skeets has been seen in several places in and around the Carib Basin, which is anywhere between Jamaica, south to Central America. “Last reported sighting that was confirmed was in Belize. Our Intelligence has him hooked up with the Mexican Cartels and he is selling them information and giving up the names of our agents down that way. However, here is where it involves YOU. Seems you have a younger brother, don't you?” “Yeah, and he is in school, Cox.” “He’s what, a graduate of U of Arizona, and in his second year of law school, NO?” “That's right,” Dallas replied. “OK. Here's what we know about your little brother R.C. Streeter.” Cox was now looking at a folder that Dallas hadn't seen because Cox was sitting on top of it. “Let’s see, Randall Chance Streeter, D.O.B 12/18/61, Adrian, Michigan. Hey Streeter, how come you didn't bring him into the family business?” “Because it wasn't for him. I gave him a choice: A full ride to school only if he became what I should have, a lawyer, or join me and die young or all fucked up.” “What a choice. So you have had him insulated all this time. We didn't even know about him until two of his best friends disappeared and were found dead in the Mexican desert.” “Cox, don't tell me that kid was fucked over for a thrill of a deal.” “No, he wasn't. His friends were, though! As far as we know, R.C is still alive. We think Skeets is going to ransom him off to you! I'm here, Dallas, to make sure you don't get involved, and I mean at all! We have it covered; we know where he is and who's holding him.
What's the date today?” “Hmm, the 7th of May, Cox.” “We have a guy going in as you, a Special Op's guy. Even looks like you. If it's Skeets, and we think it is, we are gonna bring him in dead or alive.” Dallas stood there in shock. The more he heard, the more he got sick. “I should have killed that son of a bitch when I had the chance. Now look what has happened. And I'm supposed to trust you guys with my little brother’s life”? “LOOK, Cox put his finger in Dallas chest. YOU STAY OUT! That goes for your buddy Harvey, too.” “OK,” Dallas said, (he was lying as fast as he was thinking). “Yeah, OK Cox, you guys have all the resources, and the Intel, just tell me this – What Family has Skeets been selling his soul to?” “The Amada’s. I know you know them,” Cox said. “Oh yeah,” Dallas said, “but I have only done one or two deals with them in ten years, and I'm retired now and they know it.” (All lies). Dallas was working out a rescue plan as he lied in the face of a guy he couldn't trust to change the toilet paper roll in the bathroom.

Life is good for Dallas. Semi-retired with just enough occasional action to keep the blood pumping, he lives in a fancy estate with a million-dollar view on an island near Trinidad. He and Janis share the space with an Iguana named Goliath, and the rest of his smuggling crew keep their noses clean—but all that changes following two murders in the Mexican desert.

The investigation brings the DEA’s Assistant Director Cox to Dallas’s doorstep, and life is soon turned upside-down. He and his pals are forced back into the criminal underground. With the help of Captain Bob and Marboy, Dallas pays a visit to old enemies, and it’s personal this time. He’s going to end what he started, DEA investigation or no. It’s time to finish Skeets for good.

Second in the Dallas Streeter Chronicles, Highways continues the tail of daring exploits and outlaw adventures. It’s filled with old vendettas, dirty DEA agents, and various characters of questionable repute. Take a ride by land, air, and sea from the Southern Caribbean to Belize, Jamaica, and more as Dallas races to settle the score and save his brother.

D. S. Roberts is a storyteller whose stream-of-consciousness observations paint vivid pictures of the people and places that exist in the seedy world of his past. His use of “faction,” or “lies loosely based on truth,” paints a lush and detailed backdrop. Robert’s only fabrications are a few changed names, places, and deeds.