The Planet of Magical Food 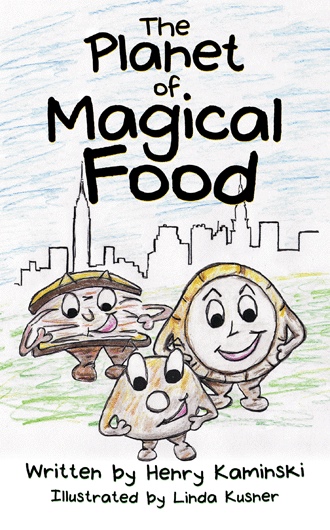 The donut knew he had to run as fast as his curious little legs could take him. He had only gone a few storefronts when he heard bellowing, “Donut on the loose…Donut on the loose!” Then more screaming “Call the police! We have an emergency! That donut has stolen himself without payment!”

The donut did his best to zigzag and dodge feet, paws, and the sidewalk cracks. Sirens in the distance came closer and closer until they were screaming at him. He was getting dizzy. A bike tire nearly squashed him. Then it got worse. Two men in blue appeared. He heard them scream. “Stop. We need to eat…I mean talk to you little pastry.”

The donut ran faster. Suddenly, a hand appeared. He swerved, flipped, and began to roll down a fortunately placed road with a steep hill. He gathered speed and saw the two police officers disappear into the distance.

Sometimes the unlikeliest heroes come from everyday people.  But what about a donut, pizza, and a sandwich?

Although unlikely heroes, they are just that in author Henry Kaminski’s The Planet of Magical Food. In a story spanning two continents, a glazed donut, a refined pizza, and a chubby pastrami sandwich work together to fulfill the final wishes of a woman separated from her love by war and time. Using the cunning plans of Donut and the strength of Pastrami Sandwich, the three evade international police and New York City’s finest when they are accused of crimes they did not commit. Pizza’s sworn mission is their common inspiration.

Illustrated by Linda Kusner, The Planet of Magical Food shows how the trio becomes friends sworn to new adventures, wherever they may lead. And that anyone can be a hero.

Henry Kaminsk, his wife, and the book’s illustrator, Linda Kusner, live with their son in Washington DC, a magical place filled with contradictions—the stuff of good fiction. Naturally, when Henry’s son asked him to tell him a story—he did. At first, the tales were brief, based upon the author’s past, and then much longer stories interweaving truth and fantasy.