BamBam the Prince of Valprivas! Gets a Visitor 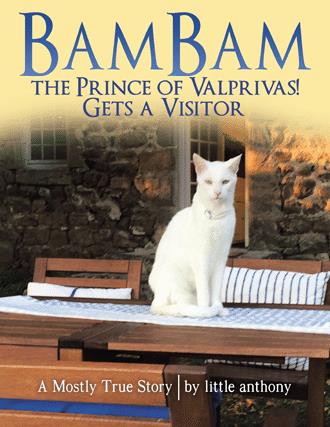 there was a homeless tiny white cat who became a Prince . . .

found the tiny white cat on the streets of Palm Beach. . .

BamBam went to live with

little anthony in Miami Beach in an

art gallery housed in a great big mansion in the sky 33 stories high.

When BamBam was all grown up, he fell in love with an adorable grey cat with white sox, named Princess Bijou.

At the pleading of Princess Bijou’s mother, Queen Helene, little anthony brought the cats to live in the

Queen Helene, as she had promised little anthony she would, bestowed upon BamBam, the title—

BamBam, the Prince of Valprivas!

For little anthony, it was . . . a mitzvah. Mitzvah is a Hebrew word which expresses an act of human kindness.

But back at home in Miami Beach,

little anthony was missing his BamBam . . . and Bijou, too!

So he decided to pack a little bag and head to Europe.

It was a very long trip for little anthony as he traveled by plane from Miami to New York, New York to London, London to Geneva, Geneva to Monaco . . . and then . . .

. . . by train, from the Principality of Monaco to Marseille; Marseille to

and finally, to the Principality of Valprivas in the Haute-Loire!

With its heavy wooden door and turrets to protect the castle. . . 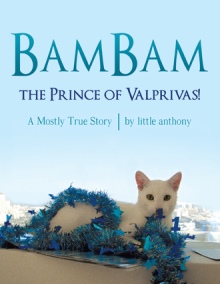 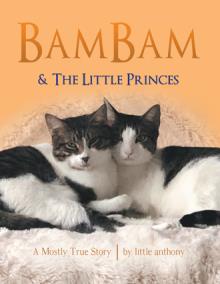 BamBam,the friendly Prince of Valprivas (pronounced Val-pree-va) is a cat that started his life homeless. One day, a little girl with big black eyes found him and gave him to a little boy with big brown eyes named little anthony . Once fully grown, BamBam fell in love with Princess Bijou of the Château de Valprivas in France, and he moved with her to live at her castle.

Some time has now passed, and little anthony longs to see his buddy BamBam. He finally makes the long journey from the United States to France to visit the Prince at his castle. Once he arrives, little anthony marvels at how regal BamBam has become. BamBam, recognizing his old friend, showers him with love, protection, and appreciation.

With Princess Bijou by his side, BamBam hunts in the garden; and Bijou climbs big, tall trees. They give little anthony a tour of the castle, including BamBam’s favorite place—the concert hall. Together, the old friends celebrate at one of the Queen’s splendid parties.

In bringing BamBam to Valprivas, it seems an enduring friendship has been built between America and France.

little anthony loves to read and write. When he was a young boy, his grandmothers read him his favorite stories over and over, including Curious George. He’s not sure whether it was the stories he loved so much or the cozy cuddling. This is little anthony’s second book in the BamBam series. He’s all grown up now and lives in Miami Beach, Florida.