A Glimpse Inside the Happy Brain of a Golden Retriever 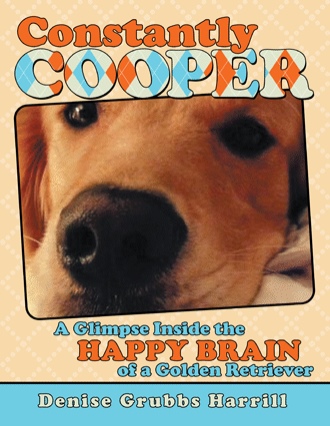 Mom was being really serious about the rules this time. It wasn't like when Nonnie and Papa came over and they kept saying the "no" word, but eventually got tired of saying the “no” word.  And I would get to keep my smellephant-sized paw propped up on Papa's knee or my drippy droopy mouth on Nonnie's lap. Papa would just say I was taking a break from being Mom’s shadow to be theirs for a few minutes. And I can't even count all the stuff that I tipped over with them. One time that stuff was almost Nonnie.

Mom said I really, really needed to be a good boy. So I said the rules over and over again in my head...

#1 do not jump all over people (she meant non-furries, but I said those rules in my head just the way she did so that I wouldn't forget)

#3 something, something personal space

just then I saw birdie Bob outside so I thought it best to start barking a whole lot so he would see me too. I would have to finish rule repeating later.

It turned out that it wasn't birdie Bob. It was that nice fellow. I was very excited so I greeted him with a big jump and lots of high fives, and then made sure he felt welcomed by inviting him to several games of tug. After I got out of time out, I really hoped that he would want to talk some more about what a good boy I was. I made sure to sit right beside him with my paw on his knee so he’d know I was ready to listen.

Cooper is golden, furry, and a beloved member of the family. His blocky head contains the silliness and devotion that come through clearly in his chocolate pudding eyes.

A goofy, lovable golden retriever, Cooper makes his way from Kansas City, Kansas, to meet his new family in Birmingham, Alabama. What’s more, he arrives right when they need him the most. After an airplane ride, he gets to his new home just in time for it to be visited by firetrucks, who come to put out the flames in the dining room. Then Cooper learns to do his business outside, although he believes he’s too young to start a business. Over time he grows older and gets to know more about his home and his family. He even gets a sister who is a cat and finds many ways to get into trouble.

In this tale told in his own words, a golden retriever shares how he perceives the world around him, the non-furries in his family, and his relationship with them.

Denise Grubbs Harrill is a wife, mother, daughter, and educator; she is also the non-furry mom of Cooper and Kitty Claire. She owns and works as an Interventionist in a company that helps people improve their literacy skills. She lives with her family in the heart of Birmingham, Alabama, in a 116-year-old house, whose original wooden floors are holding up nicely against the punishing footsteps of the one-hundred-pound Cooper.