Hacking’s Not a Game

by Gregory B. White & Illustrated by Yolanda Kastelic 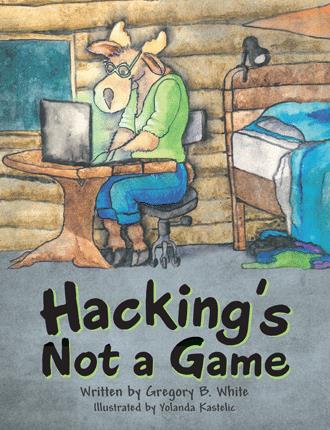 After a few miles, Papa again turned onto the highway and the family was once more headed home. Tired and upset, nobody said much on the trip back. There was no family singing. Papa wasn’t telling jokes. Mama wasn’t telling stories. They all just wanted to get home and have the day end. “At least the traffic has lightened up a bit” Papa said. “Maybe they caught whoever it was that was breaking into the computers.”

“I wonder what will happen to the hackers when they catch them” Mama said.

“Probably spend time in jail” Papa said. “And maybe have to pay for the problems they caused today.”

“Hopefully the judge won’t let them touch their computers for a long time” added Mama.

“Well, I guess your friends won’t be hacking into any computers again. I wonder if they still think it is a lot of fun” Maggie said. “They sure caused problems today.”

“Yes, they did” Max said sheepishly. “I won’t be doing it, that’s for sure. I don’t want to lose my computer and go to jail. I guess hacking is not a game.”

The Moose family has been planning their annual trip to the beach for months. Mama and Papa Moose and their children Max, Molly, and Maggie plan to spend the day building sand castles. But when they get in the car and on the road, trouble begins.

Traffic is snarled because someone has hacked into the city’s computers and changed a number of important things. In fact, the Moose family’s whole trip turns into one misadventure after another as their plans are foiled by those who are messing around illegally with businesses’ computers. Max might just know who is responsible for the hacking.

A picture book for children, Hacking’s Not a Game introduces today’s kids to the subject of hacking and computer ethics. It provides parents an opportunity to address the consequences of hacking, the problems it causes innocent people, and what might happen to individuals who do it.

Gregory B. White is a professor of computer science at the University of Texas at San Antonio. He has been involved in computer security since 1986.