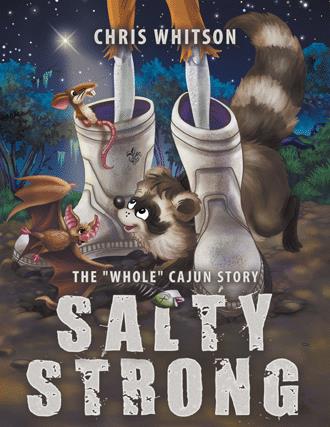 Salty was gritty and very witty. He taught himself to jazz up each dish with just a tip of his salted cap.

“I’ll keep dis trick under my hat until I find a friend te share it with,” he thought.

Salty grilled, fried, and boiled everything he caught. He poured himself into each culinary creation. “A tip of my hat adds tasty salt te dis, and dat,” sang Salty.

As savory wisps of smoke flowed through the caverns, the critters came callin’ and crawlin’ in. While Salty chewed, he shared tasty morsels with the dome’s hungry critters. This made his tiny toes tingle and tingle.

As his fire dwindled, Salty peeped through a tiny crack in the rocks. He spotted a single shiny star and asked, “Will I ever meet a spicy friend like me?”

Then he nestled into the damp walls of salt and conked out cold.

Salty is a divine Cajun boy created from the salt of the earth. While dwelling deep in the caverns of the ancient salt domes in the swamps of Louisiana, he enjoys cooking and caring for all his critters. But one day when burly salt miners arrive, Salty’s ordinary world suddenly changes forever.

After the salt miners accidentally crush Salty into a witty, gritty pile of granules and hastily pour him into a saltshaker, his strong spirit is somehow spared. As he embarks on an adventurous and uplifting journey to become whole again, Salty travels to the lively French Quarter Market. When he is purchased by a cranky chef, Salty must now come up with creative ways to stay strong in the shaker while he endures his ordeal.

In this entertaining story, after a mystical Cajun boy created from salt is accidentally crushed and poured into a saltshaker, he must begin a journey to become whole again.

Chris Whitson is a New Orleans native, father of four children, and currently a grandfather of six. Although he now lives with his wife in Florida, Whitson’s love for New Orleans, the welcoming spicy people, the jambalaya culture, and the “who dat” nation have never faded.