TRUMPED Up and DUMBED Down in the U.S.A. 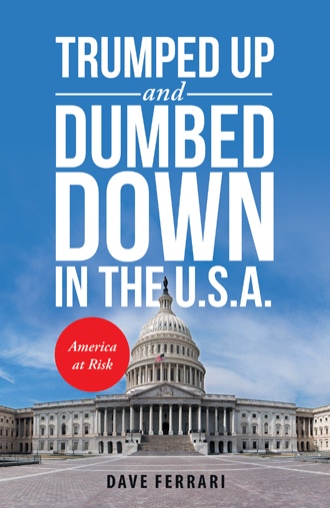 The President often enters the stage applauding either himself or the audience. The people’s reaction is astonishing. The adoration and love they have for this former TV star borders on worship. It is nearly identical to the reaction of North Korean crowds to their leader, Kim Jong-un. Praise for President Trump from those in his base, like praise for Kim Jong-un from those in Pyongyang, is feverish and hysterical. And perhaps dangerous. In their eyes, he can do no wrong. Love overrides reason. Love is indeed blind.

American democracy was violated when the Russians hacked into U.S. citizens’ e-mails. And,the Russian espionage was aided and abetted by Americans who wanted a victory at the polls so badly, after eight years of Obama, that they would even do the unthinkable to obtain it. On June 9, 2016, Donald Trump, Jr., knowing he was about to receive information gathered and compiled by the Russian government, met with Russian attorney Natalia Veselnitskaya at Trump Tower. According to the Times, this meeting was the first known indication that the Trump campaign was eager to accept Russia’s help in the election.

Some historians have called Russia’s cyberattacks equivalent to the assault on the twin towers on 9/11. It is unknown at this point the extent to which President Trump, or any of his supporters or staff, personally assisted this foreign power in swaying the election in his favor. At least a dozen of his staffers, appointees, and associates have, or at one time had, involvement with Russian officials and/or oligarchs. His adult children have had numerous interactions with Moscow as well.

Through the first 347 days, The Washington Post documented over 1,950 lies told by this new President. That is an average of nearly six per day.  Compulsive lying has no official diagnosis, according to Robert Reich, M.D., a New York City psychiatrist and expert in Psychopathology. “Instead,” he said, “intentional dissimulation . . .is associated with a range of diagnoses, such as antisocial, borderline and narcissistic personality disorders.”  The real issue here is that the new President and his spokesmen and women have limited credibility with the American people, outside of the core Trump voters . . .  If they can’t be trusted to tell the truth on the little things, can they be trusted to be honest about the major issues . . ?

The President has caused turmoil and trauma for the American public as well as for the world. Millions of our citizens have feared losing their health insurance coverage. Millions of others have wondered if they, their friends, or their loved ones will be rounded up and deported. Millions more have watched in disbelief as their new President lobbed missiles into Syria after promising to avoid any further entanglement in the Middle East. Many of our citizens have gone to bed at night wondering if their country would be involved in a nuclear war with North Korea by the time they awaken the next morning.

He is running the Presidency like a plutocracy, marginalizing the opposition and then encouraging widespread dissent and hostility towards that opposition are behaviors that are inconsistent with civilized democracies.

David Frum of the Atlantic Magazine says, “public opinion, public scrutiny, and public pressure still matter greatly in the U.S. We are living through the most dangerous challenge to the free government of the United States that anyone alive has encountered. What happens next is up to you and me,” he said. “Don’t be afraid. This moment of danger can also be your finest hour as a citizen and an American.”

Perhaps the most important lesson the American people have learned from the election and the year that followed is that elections matter, votes matter, words matter, people matter, decency matters, the truth matters–look what you end up with when these things that really matter don’t matter to those who seek to serve.

He insulted immigrants, the disabled, women, prisoners of war, fellow politicians and their wives and fathers. He even threatened allies while embracing enemies.

Despite all that, Donald Trump is now the president of the United States of America.

Dave Ferrari, who served two terms as Wyoming’s state auditor and on the transition teams for three Wyoming governors, examines the 2016 presidential campaign and the consequences of the election.

He zeroes in on the Trump campaign’s possible collusion with the Russians, the president’s personal and financial ties to the Kremlin and Russian oligarchs, and the role that the media plays in the election process, including the growing power of conservative radio and cable TV.

Whether it’s fake news, alternative facts, or the deliberate undermining of the free press, Ferrari offers a critical analysis of Trump’s presidency, comparing it to previous administrations.

Join the author as he frankly assesses our commander-in-chief and the implications of his policies and demeanor on America and its people in TRUMPED Up and DUMBED Down in the U.S.A.

Dave Ferrari, a former Republican statewide elected official, served two terms as Wyoming’s state auditor. In the 1994 election, he received more votes than any candidate who has ever run for state office in Wyoming history—a record that stands today. He was Wyoming deputy state auditor for twelve years, served as the state’s top budget official, and was director of finance and accounting for the Wyoming Department of Education. He served on the transition teams for three Wyoming governors.