One Woman’s Comical Collection of Musings, Reflections, and Observations on This Thing We Call Life 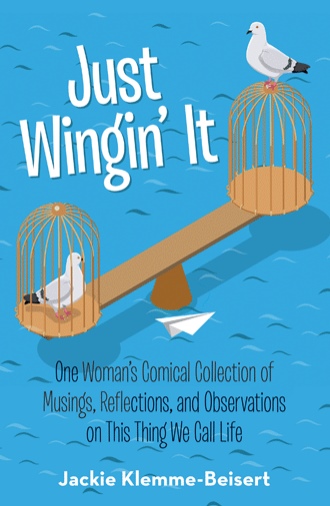 Although Benjamin Franklin is often credited with the quote, “A penny saved is a penny earned,” the phrase was actually coined (pardon the pun) well before his time. In 1640, a Brit by the name of George Herbert wrote, “A penny spar’d is twice got,” in his book titled, “Proverbs.” That is probably why everything is missing the letter E during this time, I am thinking the letter E cost a pretty penny so they just left it out. In 1695, another Brit named Edward Ravenscroft referred to this concept as well in his play, “The Canterbury Guests.” So with this history lesson out of the way, I will share with you the myriad of money saving tips I have learned throughout my years of parenting. These are humorous tips for parents who are either (thanks Gwyneth) “conscientiously uncoupled,” or otherwise.

Jackie Klemme-Beisert holds impressive parenting credentials: she waters and feeds her children on a regular basis. Her houseplants, on the other hand, are an entirely different manner.

In a collection of anecdotes and other stories based on her life, Klemme-Beisert humorously reflects on the ups and downs of raising four children, how a crush on Leif Garrett transformed into a dream of becoming an actress, why an epiphany led to a pledge to dance on every Coyote Ugly bar in the world, and how overcoming a long-held fear led her to drive into Mexico without a map, a phone, or knowing a lick of Spanish. Klemme-Beisert’s other amusing stories include helpful hints for newlyweds, insight on why a bloodcurdling scream will summon a game warden quicker than anything, and tips on why no one should ever put dishwashing liquid in a dishwasher or let a pet bird fly near a ceiling fan.

Just Wingin’ It shares one woman’s humorous musings on motherhood, marriage, and everything in between as she embraces a life full of laughter.

Jackie Klemme-Beisert was raised on a hog/grain farm in Indiana and later lived with her mother and stepfather in Texas. She has enjoyed a successful career in the retail/merchandising and pharmacy fields. Jackie is a former humor columnist, mother of four children, and currently resides in Magnolia, Texas, where she is working on her second book.