Curiosity the Bear and the Popcorn Party

And Thirty-Eight Other Bedtime Stories for Children 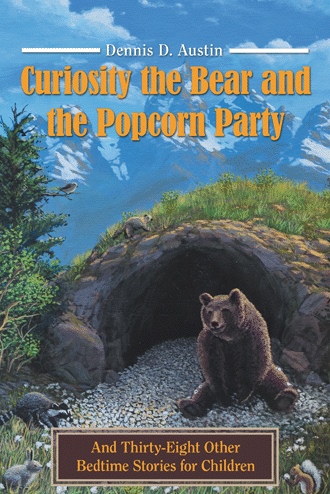 Curiously, as he was wandering through this maze of vegetation, he heard no birds, not even song sparrows, which was very strange for such nice habitat. In fact, it was also strange that there were no deer trails, or any other kinds of animal trails, which made Curiosity the Bear even more curious. As he proceeded toward the inner part of this massive vegetative habitat, the vegetation became thicker and thicker until he could barely push his nose through. And every time he went a step, he had to stop and push more bushes and thorny briars out of the way. His tender little black nose was getting scratched from all the thorns.
Finally, he reached the center, or what he thought was the center, of this massive riparian zone of vegetation. Right in the center stood a great, giant old tree surrounded by a mat of tasty green grasses. This tree was ancient by every means of measurement, and had died centuries ago, but yet looked very solid. It had not weathered during the many years it had stood in the center of this wet vegetation habitat. This also seemed rather strange to Curiosity the Bear. Curiosity the Bear looked at the tree and thought, “I wonder why this tree is here, why this tree is still persisting, and why there are no other trees.”
**What do you think about this strange tree?**
Curiosity tried to climb the tree, but for some reason he couldn’t dig his claws into the bark or the wood of the tree, and was unable to climb it. He decided to walk around the tree. He walked around it slowly, trying to figure out what made this tree so different. This tree was so big that it took almost a full minute to walk all the way around. The trunk was almost as big around as a house. But the tree just appeared to be a normal tree, probably a Douglas fir tree that had died centuries ago and was somehow still preserved. Nonetheless, Curiosity the Bear felt like something was really strange here; so he just kept looking and walking around, and wondering why there were no birds or mammal trails leading to this giant, interesting tree.
On the fourth lap around the tree, he noticed a small yellow button in one of the knotholes of the tree. He knew that a knothole was where a branch had once grown, but had broken off, and that a yellow button had no natural place in a knothole.
Curiosity thought, “What is a yellow button doing in a knothole?” He peered closely at the button and thought, “I don’t know why that button is here.” He reached up with his bear paw and was about to grab it, when he realized that it wasn’t a regular button. It was not a button for clothes as he had thought, but it was a button to open a door. Printed in miniature letters on the button were the words, “Push to Gain Access.”
As soon as Curiosity pushed the button, the tree began to open up; a massive door, camouflaged in tree bark, creaked ajar. Inside the door, Curiosity the Bear could see a long hall leading down a tunnel underneath the ground. Curiosity the Bear didn’t know what to think.
**What do you think Curiosity had discovered?**
Curiosity the Bear had just discovered one of Santa’s three secret entrances to his Secret Toy Factory. Of course, Curiosity the Bear didn’t know that this was a secret entrance, so he just walked in. Once inside, the massive door abruptly closed, with a loud “CLUNK,” and the room became black without any light. But after ten seconds, a switch clicked, dim lights turned on, neon signs lighted up above him, and he read, “This is Santa’s secret entrance #1 to his Secret Toy Factory. There are only three entrances, and guards are always stationed here to escort you out. Please never return. This is a secret place.”
But there were no guards! This seemed strange to Curiosity the Bear. And Curiosity thought, “Heck, I’m not a human anyway, and I know I’d never hurt anybody. So I’m just going to go down this tunnel and determine where it leads.” As he walked down the tunnel, he saw posts where the guards should have been standing, but there were no guards, anywhere.
**What do you think had happened to the guards?**
After a short walk he found a cart, and the cart was located at the end of an underground rail system. Of course, Curiosity jumped in the cart, and immediately and automatically the cart began to roll down the rails, and the cart just kept going and going and going. It was a long rail track. The cart carried Curiosity for several miles at very high speeds that baffled Curiosity the Bear. The system was automatic and Curiosity the Bear didn’t understand automatic. Finally, the cart came to a screeching halt, but again there were no guards to tell Curiosity the Bear he had to leave. Indeed, Curiosity heard nothing.
Curiosity continued to walk down the dimly lit tunnels until he saw a lighted area ahead. As he approached, he could see that it was an immense room, approaching the size of a football stadium. The room was the main sub-factory for the making of toys. And next he began to hear voices, far away voices. Voices that sounded a bit strange, maybe human, but yet unusual. Curiosity the Bear continued until he could peek over the railing into this immense, cavernous room. And what he saw was really surprising.

Explore the adventures of Curiosity the Bear, Twinkly the Mule Deer, Abbey the Moose, Lizard the Leprechaun, Journey the Wolf, the Orange Fairy, Tritzel and Little Elf, Icicle Man, Little Cup, the Flying Suitcase, and many other creatures.

Delight in the magic of the Magic Pencil, the Magic Muffins, the Magic Glasses, the Magic Puddle Waters, the Mental Telepathy Book, the Ghost Detective Handbook, the Animal Voice Interpreter, Spirit Lake, and many other magical phenomenons.

Enliven young minds to the mysteries of bedtime story imaginations.