A Simple Will for Dying Well

How to Handwrite Your Own Will without Witnesses, Notaries, or Lawyers 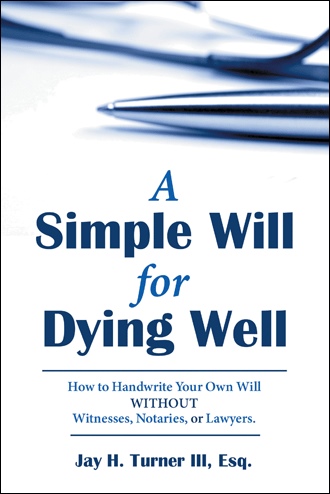 Chapter 1. Why Have a Will?

The only guarantees in life are an eventual death and, as Ben Franklin points out, paying some taxes along the way. Despite the certainty of our own mortality, most people in America have not prepared a will. In a Gallup poll taken in 2016 , only 44% of Americans report having prepared a will. This is lower than in two prior Gallup polls: 51% taken in 2005, and 48% taken in in 1990. According to the statistics, approximately 56% of Americans will die “intestate” (a legal term for “without a will”). Such people come from all income and socio-economic levels. The recent death of the musician Prince is but one high-profile example of a person with significant assets who died without a will. In Prince’s case, the lack of a will opened the door for numerous “heirs” claiming to be his wife, child, sibling, and other distant relatives. Without a will identifying beneficiaries, his estate will undoubtedly incur additional and significant legal costs addressing these claims.

The statistics are discouraging and they mean that most families will, at some point, administer an intestate estate. When a person dies without a will, the state laws of his or her residence determine who inherits the estate assets. The people who inherit are referred to as the “heirs at law.” The heirs at law generally start with the closest living relatives, then move out along family lines. Sometimes this arrangement works fine, other times not.

It would be interesting to do a survey of Americans who would be willing to let their state government mandate exactly how they could spend their money during their lifetimes. I suspect the number who would be willing to do that would be very small. But, by dying without a will, such individuals are doing just that – allowing the state to determine to whom their assets pass at death. Moreover, these estates are significantly more difficult and expensive to administer than when a decedent prepared a will.

One common worry is that if a person dies without a will, the state will take that person’s assets. While this result is unlikely, it is possible, depending on state law and whether the person left any close relatives surviving. Even if there are living heirs at law, such heirs may not be the “beneficiaries” that the decedent intended to benefit. There are several common scenarios that often result in unintended inheritances:

Multiple Marriages. If the surviving spouse is not the mother or father of all of decedent’s children, many states require that part of the estate pass immediately to the children. Logically, this makes sense. If the surviving spouse inherited everything, then there is a good chance that a step-child would not later inherit anything from the surviving step-parent. This is good law if you are a child, but not great law if you are the surviving spouse. For example, I handled an estate where the wife died unexpectedly without preparing a will. The wife had two children from a prior marriage and, under state law, all of her assets, including her house, were divided between her second husband and her two children. At her death, her husband and children then became co-owners of the family home; and no matter how “good” the relationship between children and step-parents are, no spouse wants to lose the exclusive right to live in the family home.

Underage Beneficiaries. Without a will, a parent cannot make any provisions for a minor child. When a minor child inherits assets under state law, that child will normally have full access to those assets upon reaching the age of majority (typically age eighteen). I witnessed an eighteen-year-old inherit a large sum of money and, instead of going back to college, the newly rich “adult” had other plans for his time and money. This resulted in tragic, life-altering bad decisions on his part. A far better result would have been to name someone to hold the assets on the child’s behalf until he reached a more appropriate age. The will is also the document in which the parents nominate guardians for the minor children. Without a will, the court must decide who takes custody of the minor children, which can result in fights over who takes possession of the children.

Non-heir Beneficiaries. Without a will, a fiancé, step-child, or other person you may intend to treat as “family” will not inherit under the intestacy statutes. For example, if you wanted to leave assets to your best friend, it is very unlikely that your friend would inherit anything under your state intestacy laws.

Lack of Control. Without a will, you give up the right to appoint the person who will administer your estate (known as the “executor”). This opens the gates for various persons (possibly including creditors) to seek appointment and control the disposition of your estate. Additional Costs. Not having a will can also cause your estate and beneficiaries to incur significant expenses. If you do not have close relatives, or you have several distant relatives who might inherit, your estate may have to hire a geological search firm and/or seek court approval to determine who inherits. I worked on an estate where the heirs were very distant cousins and the family tree ended up being the size of a large conference table. I have also seen a large estate where a father’s long lost “child” appeared after the father’s death, claiming inheritance rights, requiring multiple court hearings and, ultimately, a DNA test. Clearly, this process can have significant costs to the family, monetarily and emotionally. So, for all the reasons discussed above, if you are one of the majority of Americans without a will, I hope this book will give you the information and motivation necessary to change that.

Despite the certainty of our own mortality, most people in America have not prepared a will. Upon their deaths, this leaves the distribution of their assets at the mercy of the laws of their state. The best way to prevent complications and headaches for those left behind to create a will—even if it seems intimidating to consider at first.

A Simple Will for Dying Well offers the perfect resource for any person living in one of the states* listed below which allow handwritten wills without the need for witnesses, notaries, or lawyers. Author Jay H. Turner consolidates decades of estate-planning experience into a concise, user-friendly manual for writing a will. He explains each part of a will in detail and provides sample provisions covering most planning scenarios, all written in plain English. With this guide, all you’ll need is pen, paper, and a little motivation to write your will—no more excuses!

Jay H. Turner III, Esq., is a lawyer who has helped clients navigate the complex world of estate planning for more that twenty-two years. He is listed in Best Lawyers in America© and Virginia Super Lawyers in the field of Trusts and Estate law. He is a fellow of the American College of Trust & Estate Counsel and is a frequent lecturer and author on a variety of estate-planning topics.