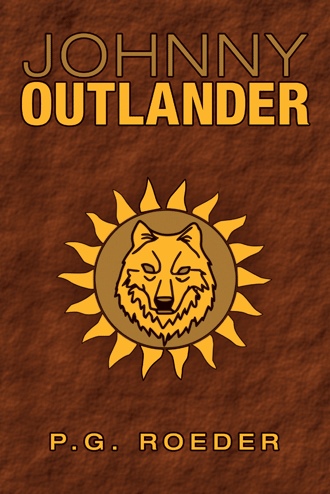 Johnny could not have been happier.  He turned to Bryn and, with uncharacteristic spontaneity, gave her an impulsive hug which lifted her off the ground.

Bryn was speechless.  This was better than she could possibly have hoped.  All she could do was beam at him.

Ayers pulled Johnny’s backpack, suitcase, and trunk from the truck and set them on the ground.  He smiled at Johnny and offered his hand.  “I’ll expect you in class on Monday.  Everyone is looking forward to meeting you.  Bryn will show you the way; it’s not far.”  As Johnny took his hand, Ayers added.  “Glad you’re here.  Truly.”

Johnny watched as Ayers turned the truck around and headed back into the shadows of the lane.  Then he shouldered his backpack, picked up his suitcase and turned back to the house.  And froze. The hackles on his neck actually stood on end.  Where, a minute before, a sleeping cat had lain, now stood a wolf.  A large wolf, shades of gray and mouse brown, old and a little ragged around the edges.  The defiant eyes were amber yellow, and they caught the errant sunshine, flashing golden fire.  The look in those eyes was anything but friendly.

[This is my territory.  You are not wanted here!]

Johnny’s eyes darted everywhere, while the rest of his body froze instinctively still.  His grandmother was not in sight, but the rather indignant cat was safely on the porch.  There was no cover, no place to run.  Johnny resolutely met the wolf’s gaze.  “But I am wanted.  My grandmother brought me here.”  Where was his grandmother?

“I am Bryn’s grandchild.”  Johnny searched for words.  “Of her bloodline.”

The world-weary wolf considered this information.  Their encounter might have to be a draw.  But this upstart couldn’t just intrude unchallenged. [This is my territory.  Mine!  Watch yourself.]  The large, gray wolf turned to leave, but paused.  He swung his head back toward Johnny.  [What are you called?]

The wolf breathed in and then out, in what sounded for all the world like a sigh.  [Of course you are.]

For more than a thousand years, in Wales and environs, those who were strangers or without land have been known as “outlanders.” These strangers never quite fit in with the native peoples, never quite belonged, and the appellation followed them wherever they roamed. In time, it became their identity. This aptly describes, Johnny Outlander, a seventeen-year-old boy who has always been different than others.

Johnny’s father abandoned him in infancy and his mother moves away, leaving him in the care of a grandmother he’s never met. Bryn Evans lives in the redwood forests of Northern California, and she’s not quite what he expected.

Johnny has kept a deep secret from his early childhood, and now at seventeen he discovers a destiny that’s been awaiting him since man first walked the earth. His life is about to change as he embarks on a journey of self-discovery, only to find he has inherited a destiny far older than the redwood forests that surround him.